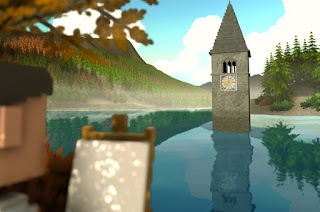 So first up, this week, we have the 19th edition of Indiepocalypse. Indiepocalypse is a monthly collection of independent games that have been carefully curated, and it works as a bundle of stuff that you simply would not be playing. In other words, these games are the most indie of indie, and that makes this bundle a real opportunity for anyone that does like to experience the different, quirky, personal and artful.

This week we have a huge range of titles, including a tactical card game, The Arena of Exarch, a tabletop RPG about a rhyming wizard academy, The Wizards of Rime Academy, visual novel, A Mother’s Chinese New Year, and LanVoids, a navigation game about embracing disorientation. In addition, you get a zine on all these games (and a zine maker software so you can produce your own!). It’s great value and a great bundle.
Torii

Next up we have one of the most refined-looking games that I have seen in all my time covering games on Itch.io. This one is called Torii – as in the gates in Japanese shrines – and it seems to be very much inspired by Journey and other independent artsy games. It bills itself as an introspective journey about feelings, where you will be joining characters on an unusual and surreal adventure.

You will need to overcome your character’s greatest fears and sense of guilt to find their little sister. It looks like that quest takes place within a basic exploration game, in which you will be looking for hidden objects, solving puzzles and collecting things…. so in other words it’s certainly not going to be a high-pressure game by any means. And as I mentioned before, it is an introspective little title so really it’s about allowing the aesthetics to wash over you and put you in a reflective mood as you play. It really is something beautiful.

Life Can Be Amazing

Next up we have this week’s obligatory visual novel, because of course we do! Every week there is a pile of new VNs that get released on Itch.io, and it really has become the best platform to go to to find what independent developers are doing with the platform. This one is called Life Can Be Amazing, and it does seem to be quite the charmer. It bills itself as a “romantic yuri comedy visual novel”, and I think it might be the simple fact that this looks like the kind of game that I would love to make that has drawn me to this one over some of the other excellent-looking releases this week.
It’s got very pretty characters, for a start, and it’s taking place in a tropical resort, which gives it a light-hearted bubbly aesthetic that is incredibly appealing. The backgrounds are amazing and the character design is really distinctive and interesting… it’s certainly an independent project and you can see that, but it looks like there’s a cohesiveness and vision to it, and that’s what’s really important. It’s not going to be too long at 50,000 words, which works out about three or four hours worth of gameplay, and there are three love interests, so that means that there will be a number of different endings to find as you play along. Finally, there is also a tropical smooth jazz soundtrack, which I do like the sound of, as I do like my jazz and tropical vibes.

Finally this week we have a game that looks a little bit artsy and thought-provoking. It’s called A Painters Tale and is set in Curon in the year 1950, which was an Italian town that was quite well known for disappearing under a lake, after the fascist government of the time decided to merge some dams and basically ended up sinking the entire town. It was a tragedy (and a pretty good metaphor for fascism), and while this game is not a documentary, it does take the history and builds its fiction around it so that you’re learning a little bit as you play.
Now the game has actual oil paintings and charcoal drawings featured within it, to help sell the “painter” theme, and the goal of the game is simply to explore this town before the tragedy hit it and experience the events leading up to that tragedy. It has a really lovely art style, and I’m all about games teaching people a little bit as they play. Having very little understanding of the story of Curon myself, I’m looking forward to learning a little as I play here.