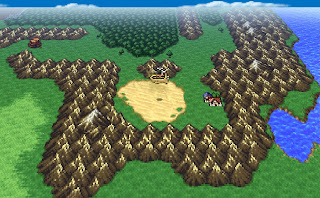 There’s no point in reviewing the Final Fantasy Pixel Remasters, right? We’re talking about a bunch of classics that have been written about to death over decades now, and you absolutely know whether you like them or not by now. However, Square Enix has done these new versions of the first three Final Fantasies (with IV through VI to come later on this year), and they’re available on PC and mobile devices, so I figured I should write something about them. They’re perfectly fine. Square Enix has certainly done worse things with these beloved titles in the past. But on the other hand Square Enix has also done far better.

Related reading: On Final Fantasy I and determinism.

The pick of the pack is Final Fantasy III, because you actually haven’t played this exact version before without being able to read Japanese or relying on a fan patch and an emulator. Square Enix never released the original Final Fantasy III in English, and before now the only version that had been available was a very good (but divergent) 3D remake. So now you play the original, narrative unchanged, in full pixel glory. Final Fantasy I and II are given similar treatment with this Pixel Remaster series, but those two titles have been widely available in this approximate format for quite some time now, so they don’t feel quite as interesting this time around.

A fair few of the updates that Square Enix has made to these games to give them a “modern pixel” look has been quite nice. I quite like the sprites and environment design, which has nice little atmospheric effects, a reasonable amount of detail in each character, and there’s even a neat little “Mode-7” like effect when you jump on an airship which gives a SNES-era effect, and that’s nice. I can be a purist with this stuff – I actually still enjoy playing the original Final Fantasy on the NES hardware – but when the developers have aimed to recapture the aesthetic quality and tone of the original game I’m also quite happy to play remakes. Unfortunately, while all of what I’ve described above is the good stuff, it’s not the whole story. What I can’t stand is when a remake introduces jarring features that disrupt the quality of the base game. These Pixel Remasters have a few of those. 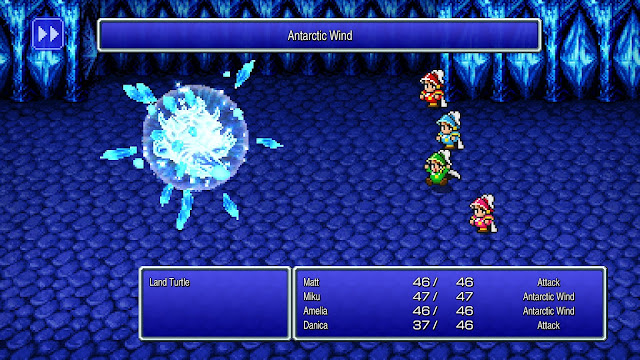 The most glaring of these is the godforsaken font that the developers have chosen. It’s not so much the text itself, though. In isolation I quite like how readable it is, and were it to be used for a game where the font is native to the whole experience, I wouldn’t pay it any notice to it at all. However, here, it’s too crisp, too clear, and therefore clashes in a very ugly way with absolutely everything else on the screen. Another issue is the use of screen real estate. The original games were designed for 4:3 televisions, which leaves a question about what to do with the rest of the screen on the modern widescreen. With the Pixel Remasters, Square Enix have simply extended things. This is fine for the overworld map and dungeons (in fact you get to see more of it at once!), but when a battle is joined, all the turn-based “action” takes place in the middle of the screen, with weirdly large gaps on either side of the screen which are filled with nothing but background. It’s too much misused and misplaced empty space, and it makes the combat screens look poorly balanced on the eye. This is all basic aesthetic principles here and it boggles my mind that a company with Square Enix’s resources manages to overlook his stuff. Perhaps they get the interns to work on these micro-scale projects (by the company’s standard)? regardless, Square Enix is certainly selling them for a premium, so it’s fair to expect better.

In other ways, there is some substantial quality of life improvements. The ability to fast-forward the action makes the experience grinding less of a grind for people that are looking for a more modern rate of progression. On the map, characters can move freely in all directions, rather than being restricted by the four-directional “up, down, left and right” movement that the original games restricted players to. The iconic soundtracks have been remastered and modernised in a way that does do them justice, and there are all kinds of little bonuses, like a music player and art gallery. Oh, and achievements! There are achievements. None of this is stuff that isn’t widely available in other ways (aside from the achievements), but as a package, it does make the overall purchase seem reasonable.

And, of course, it can’t be forgotten that all of these games are fundamentally very, very worthy. I play Final Fantasy I in some form or another at least once per year. It’s like a warm, comfortable favourite book or film – it doesn’t matter how many times you’ve experienced it, you can pick it up and enjoy it all over again. Having these Pixel Remasters, which are 90 per cent of the way there, on my Steam account, is not something I’m going to complain about (especially with that Steam Deck on the way). 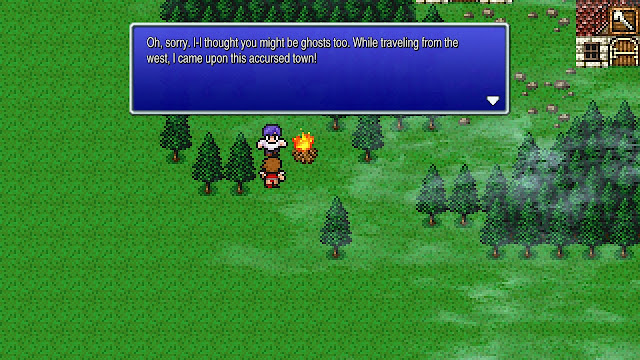 With that said, I can’t see any reason why these three games couldn’t be bundled up into a collection and released on everything. Square Enix did just that with the SaGa Collection, and that is excellent. Heck, Square Enix was releasing collections of these early Final Fantasy titles themselves as far back as the Game Boy Advance. Collections are the standard for these kinds of retro experiences, and the fact that Square Enix is trying on individual (full-priced) releases instead with these does come across as pretty on the nose… but then again, I’m one of the suckers that bought all three, and I’ll buy FFIV through VI when the Pixel Remasters of those get released, too. If Square Enix (when Square Enix) releases them on Switch I’ll buy them there as well. I’m a sucker like that… and hey! If nothing else, at least these aren’t those utterly dismal Dragon Quest things Square Enix threw on Switch a while back.

We have a release date for Blue Reflection: Second Light – yes!

Review: NEO: The World Ends With You (Sony PlayStation 4)