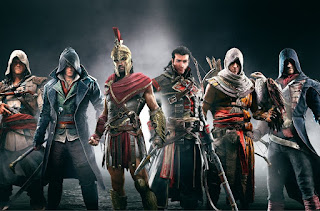 Putting aside the ongoing accusations of sexual harassment within the many Ubisoft towers across the globe (that in itself really should be the main subject of discussion with regards to Ubisoft, but I’m not close enough to sources to be the one to do it), yesterday there was some big news regarding Ubisoft’s premiere Assassin’s Creed series that came to light. A new Assassin’s Creed, titled “Infinity,” is in development, and it will be a live service title. As Assassin’s Creed is the last “AAA” blockbuster from western studios that I held an interest in, imagine my sheer disappointment at this news. A series that I had regularly given five-star ratings to is now worthless.

That’s right. I am saying what you’re reading. I know, without a shadow of a doubt, that I do not need to play Assassin’s Creed Infinity to know it’s worthless. I know that because every other live service is worthless.

By their very definition, live service games have no artistic value. As described by Jason Schreier at Bloomberg: “Inspired by smash hits like Fortnite and Grand Theft Auto V, these living online platforms can keep players engaged for years by frequently adding new content or changing the experience in dramatic ways.” These games throw content at players without the slightest concern for context. They gather data up by how players engage with the content and use that as “feedback” to “improve” the experience, without, for even a second, considering what message they want to send to players. Let alone consider whether they want to do what artists are meant to do and challenge and inform the audience while entertaining them.

If Shakespeare were creating live service theatre, he’d be hiding out in the foyer after Romeo & Juliet and listing to the audience’s opinions. “Oh my that Juliet was a bit of a waifu,” one rather bawdy theatre-goer might say. “I rather wish she’d survived, hey.” Then, at the next night’s performance, the audience would discover that based on “theatre fan feedback,” the new and “improved” Romeo & Juliet now has Juliet wearing thigh-high boots, stabbing Romeo in the throat, and then sneaking off with Rosaline, her secret love. Sure, Shakespeare would probably get a standing ovation from it (I know I would), and he would sell Romeo & Juliet tickets for years and years as people kept coming back to see how he “fixed” the play with each new “content drop”, but would the play say anything, anymore? No. At best it would only ever be a hollow reflection of the mob’s tastes at that given moment in time… which, yeah, actually does describe Fortnite and GTA.

You don’t make art by fixing it, in any other art form, and the rare time when someone has tried to go back and fix an existing artwork, it has failed. You might produce a new edition of a novel to address some grammatical issues, but books aren’t live services, and we read, and judge, them, based on how they originally stood. When Gus Van Sant shot a frame-for-frame remake of Psycho, but in colour, it was lambasted by critics and cinema fans for being an utterly pointless endeavour. Most Star Wars fans prefer the original cinematic version of the original trilogy before George Lucas committed to destroying his legacy by “modernising” them for the DVD and etc editions. But over in games, Mass Effect 3 got a new ending to “fix” it (and then BioWare would go on to make Anthem, a live service game with precisely zero narrative value). Elsewhere, these live service games, from Fortnite to Ubisoft’s own For Honor, and on to Square Enix’s The Avengers, undergo endless content drops designed to not just address bugs or give the game a HD sheen for the new generation, but update the very core shape and experience. These efforts aim to fundamentally change the aesthetics and structure of the games. They get celebrated for that, because they become endless and content-rich, but they also become shallow, vapid, hollow, empty and passive experiences beyond the very basic entertainment value that they provide.

This is the last thing I wanted for Assassin’s Creed, which was already veering down a too-dark path with the bloat that Ubisoft was shoving in there. You had to be really committed to ignoring a lot to enjoy the (otherwise very strong) core of Valhalla. Assassin’s Creed at its best is a narratively linear experience that transports you into an alternative history epic, where you take place in real-history events, meet real historical figures, and the entire experience is structured around telling a story. None of that needs a live service. In fact, the more Assassin’s Creed has ventured down the path of endless side-quests, grinds, expansions, base building, and all the rest of the stuff that goes into live services, the lesser the experience has become. And now Ubisoft is going all-in. They’re going to use the history stuff as a hugely passive and transient backdrop for the same sandbox experience that every other live service game has ever offered. The historical context, the narrative (if anything meaningful happens there), the characters and the world exist to deliver gameplay content and can and will be altered and/or removed at the whim of the markets. And by default this means that the content has no meaning. If it was sharing some sort of critical message or thought, then it would not be removable or changeable. That’s literally creative writing 101 – right along with “be as efficient in telling the story as possible,” is the lesson that, in editing, you should slash anything that is superfluous to the point that you’re making. Live services are the antithesis of that.

And for those of you that don’t think that any of this matters – take a good, hard look at the games being made by the big studios now. They might all be making more money than ever, but the better games that they used to make, almost on an indulgence between the big releases, have dried up. Ubisoft isn’t producing games like Child of Light or Valiant Hearts, for example. Ubisoft can’t even get a remake of Prince of Persia out the door. Sony is so committed to the blockbuster that they killed off its (much) more art-focused Japanese studio. EA, Activision, Microsoft… all these companies are chasing ongoing, endless revenues, and this is changing the kinds of games that get made.

So, again, as I say in the title: Live service games can bleep off. They’re parasites that suck the creativity and artistry out of game creators, while at the same time vacuuming away all the money that could have instead been directed towards artistic projects. Could this Assassin’s Creed Infinity somehow be different? Of course. Ubisoft may somehow figure out how to take a “genre” fundamentally lacking in narrative, artistic, and creative value and put narrative, artistic and creative value in there. Sure, Ubisoft hasn’t managed to do that from a half dozen attempts so far, but perhaps this one may deliver the impossible miracle. If that happens I will happily eat my hat as I dive deep into the first live service game that has ever been worth a damn. But I’m still 99 per cent sure I can give it a review score right now. So, everyone, here’s the world’s first score for Assassin’s Creed Infinity:

Monster Hunter Stories 2: Why I love this “monsties”-filled JRPG