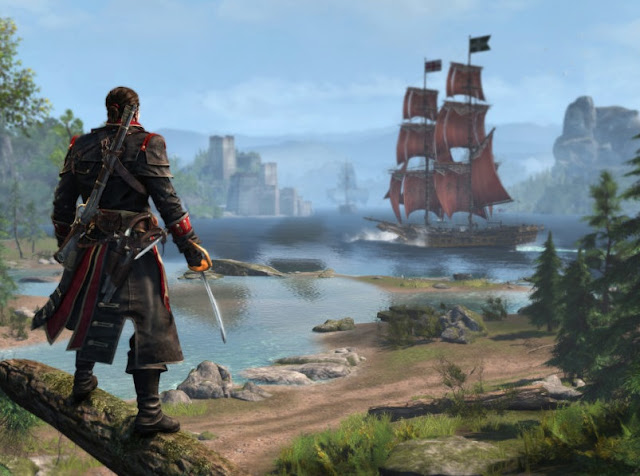 Think back to when the PlayStation 4 was new and shiny. People were excited about what Ubisoft would do with the extra power of the hardware with its moneymaker Assassin’s Creed franchise. After all, a series that is all about massive open worlds and historical epic storytelling could only possibly benefit from all that extra tech under the PS4’s hood, right?

Related reading: Another remaster of old Assassin’s Creed games on PlayStation 4, The Ezio collection is well worthwhile. Our review.

Well, as it turned out, people laughed at that first attempt; Assassin’s Creed Unity. They laughed a lot. It wasn’t a great game in terms of storytelling and design, and that was bad enough, but worse, it was plagued by some of the most amusing (but completely immersion breaking) bugs that we’ve ever seen in a blockbuster yet.

While everyone was busy laughing at that game, I was busy playing Assassin’s Creed Rogue. Released at the same time, but exclusively for legacy systems (PS3 and Xbox 360), it was Ubisoft’s B-team production, giving people who hadn’t yet upgraded their consoles something to play that year, since they were “missing out” on Unity. The thing is, though, it’s a far, far better game than Unity ever was. It’s better than almost everything the Assassin’s Creed franchise have ever thrown up. And now it’s on a whole different level, having been remastered to take advantage of the technical strengths of the PlayStation 4. 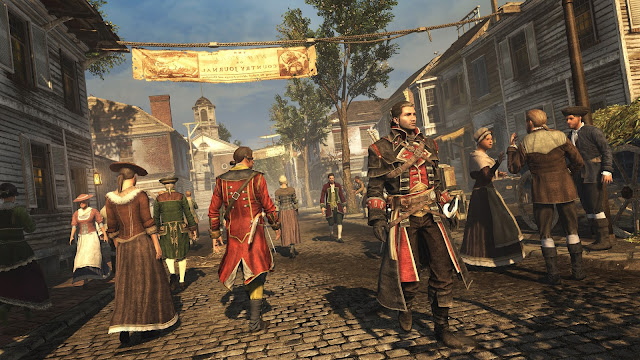 Assassin’s Creed Rogue is the third and final instalment in the “Americas” trilogy that started with Assassin’s Creed 3, continued with the pirate-themed Black Flag, and concludes with this one (yes, there was also the excellent Assassin’s Creed Liberation starring Aveline, but it’s held as a separate game to this “core” trilogy). Rogue stars Shay Patrick Cormac, a broodingly handsome Irish man (God those Irish accents are something spectacular), that finds himself in the northern part of the east coast of America. It’s cold and miserable, and that is a nice visual metaphor for the plot, which takes the series in a darker (than usual) direction. See, Shay’s talented, but he’s also insubordinate, and chafes under the command of the assassin leadership in this corner of the world.

Then something big happens, and it leads Shay to betray his brethren and become a Templar. This isn’t a spoiler, it’s a major plot point that Ubisoft was open about from the start, and that makes this game one of the rare times that the assassin’s order are not portrayed as fundamentally virtuous (even if individuals within the order have been questionable at times). Here you actually get to kill protagonists of previous games. There’s also a really neat reversal in mission structure; once he turns templar, Shay’s job becomes one that’s often focused on preventing assassinations, and both thematically and in terms of gameplay, that about-face is a welcome new way of looking at the whole series.

Furthermore, through this game we get a real sense that the templars are not an arbitrary evil and certainly have some good people among the organisation. In introduces a sense of relativism to the game which is good to see; the idea that in all those previous Assassin’s Creed games, the templars weren’t so much an enemy only good for murdering, but more an organisation that simply has a different world view, and yet is equally populated by good and honest people – including Shay himself. In the context of the entire Assassin’s Creed franchise, that nuance is important, and so series fans really do owe it to themselves to play this game at least once through themselves. 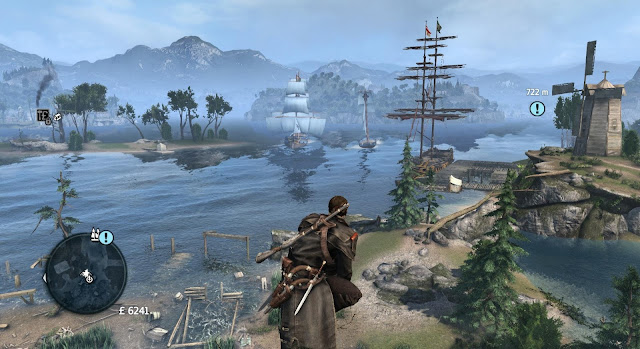 As with all Assassin’s Creed games, there’s a healthy dose of historical background to go with the pseudo fantasy and sci-fi elements of the assassins-vs-templar story. This time around, the game’s set during the Seven Year’s War – a global conflict but in North America manifested as an alliance between France ant the Seven Nations of The Iroquois Confederacy against the English. This means that, chronologically speaking, it actually takes place before the events of Assassin’s Creed 3. You’ll get to meet with historical figures, including the likes of Benjamin Franklin. New York, before the great fire that ruins it as a setting in Assassin’s Creed 3, is the game’s one major urban environment, and it’s a lot of fun to run around.

Related reading: The most recent Assassin’s Creed is, of course, Origins. Our review.

The game also spares no effort in reminding you that you’re in a very cold part of the world. As with the previous games set in America, sailing and ship battles are a big part of Rogue. But where swimming around was a lot of fun in the tropical waters of Assassin’s Creed IV: Black Flag, in Rogue you’ll freeze quickly unless you get out of the water, and fast. Icebergs can be found all over the place, and destroying them is actually a clever tactic, since the waves that they create won’t likely topple your reasonably large ship, but may well wash away smaller enemy ships. Outside of New York, there are tiny forts and villages to visit, but they’re often so snowed in you wonder how anyone could survive in those places.

Rather than being dull, though, the endless cold of Rogue’s aesthetic is quite gorgeous, and both distinctly American while being different from the games that preceded it. Colonial-era New York was a fascinating place, only just having emerged from its frontier roots, and so as sprawling as it was, it was still a place that was barely under control under the surface, and was filled by rough-and-tumble types lured to America on the promise of adventure and fortune. The effort that Ubisoft put into researching the architecture and fashion benefits significantly from the improved visual upgrades on the PlayStation 4, of course. Indeed, the game looks very close to a native PS4 title developed by a mid-to-upper tier publisher. It’s not of the same fidelity as Assassin’s Creed Origins (though little is, even among blockbusters), but as far as art direction and design go, the upgrade is right up there. 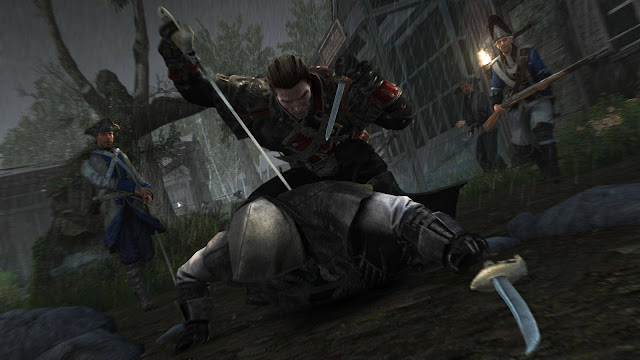 Assassin’s Creed Rogue also has the most impressive ship battles of the series to date, with the slower, more tactical pace involved with massive, sail-powered ships rolling around in the ocean really allowing for some spectacular visuals and tense moments. It’s no wonder that Ubisoft has decided to build a multiplayer game based entirely on the ship battle system from Assassin’s Creed (the upcoming Skull and Bones). I’ll be more than willing to play that one.

The land-based combat and exploration is vintage Assassin’s Creed, for both good and ill. The game suffers from the series’ usual obsession with chasing icons around a map, often for utterly useless things in order to earn that 100 per cent completion. But when you’re on actual missions, the world design allows you to experiment and come up with unusual solutions when you’re comprehensively out-gunned. For example, when there was a particularly heavily guarded enemy I needed to take down, I was able to climb up onto a nearby building and snipe berserk darts at the nearby enemies, which caused them to start attacking one another and, amusingly, my mark. They killed him for me, and then I was treated to a cut scene where Shay was listening to his mark’s dying confession, as though Shay just slid a knife between the guy’s ribs while standing right next to him. While that’s effectively a bug in the storytelling design, I did appreciate the freedom to come up with an alternative solution to the game’s problems than the developers had perhaps not anticipated. I generally like the Assassin’s Creed games for that freedom, and Rogue’s no different.

People who are coming off Assassin’s Creed Origins might find the swordplay a little bit limited, though to be honest I prefer the clean and efficient combat of earlier Assassin’s Creed games to the cheap RPG systems and loot grind that became part of the Origins experience. I’m probably in the minority there since I don’t believe that combat should play a major role in Assassin’s Creed in the first place, but there you go. The comparison between Rogue and Origins will be seen as a sign for how far the series has come for some, which is a good thing in its own way. People always accuse Assassin’s Creed of playing things too safely. The contrast will show otherwise. 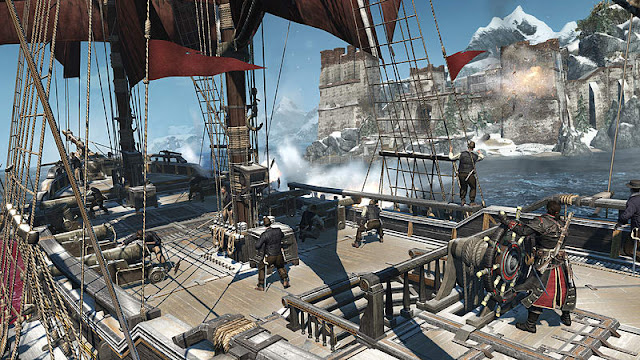 Assassin’s Creed Rogue was a game that turned out to be better than Ubisoft was perhaps expecting. The company spent so long burying news and details about Rogue in a bid to heavily promote Unity that, at times, Rogue feels more akin to Liberation or even the Chronicles 2D platformers – a side diversion rather than a major part of the Assassin’s Creed lore. And perhaps that’s why it turned out so well. It feels more creative and less constrained than the “major” Assassin’s Creed titles (as did Liberation and Chronicles), and for that reason it’s right up there with my favourite games in the entire franchise. And now, remastered on the PlayStation 4, we’ve got the game Rogue always deserved to be.