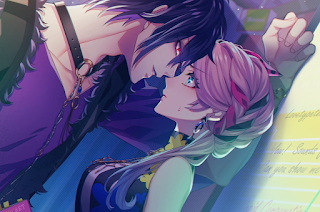 Idea Factory International held a little virtual event to highlight what it has coming and it looks like there’s some really nice stuff on the way. One really nice surprise, too! Trailers and details below:

We all could have assumed this one would eventually happen, but it’s nice to have it confirmed. The two super-fanservicey franchises cross-over in an action RPG from developer, Tamsoft (no stranger to either Senran Kagura or Hyperdimension Neptunia) that promises plenty of boobs, upskirts, legs and humour. It releases on the PlayStation 4 (alone) at some point this year, though we don’t have a release date just yet.

Idea Factory in Japan produces more than a few otome titles. But it doesn’t release all that many of them in the west via IFI – usually, Aksys picks up the duties. Cupid Parasite is a welcome exception, however. Billing itself as a “romantic comedy,” this Nintendo Switch visual novel has a gorgeous street aesthetic and looks like it’ll be high energy indeed. It will launch this “fall” (spring in the southern hemisphere) for the Nintendo Switch exclusively.

The final entry in the incredible Mary Skelter dungeon crawler series has a release date now. It will be released on PlayStation 4 and Nintendo Switch on September 30 in North America and October 1 in Europe. But there won’t be a release in Australia. The game’s been banned here because the Australian Classification Board remains a racist body that is disproportionately aggressive towards anything that looks vaguely Japanese. Just as well the Switch and PlayStation 4 are region-free devices – yes, ACB, I’ll be importing. Come get me.

Death end re;Quest 2 to get a Switch port

Continuing IFI’s trend of releasing Switch ports of its games a year or so after the PlayStation release, Death end re;Quest 2 will be coming to the Nintendo Switch in 2022. This version will include all free and paid DLC and while its blend of creepy visual novel and pinball-themed combat system isn’t for everyone, this series is a cult favourite for a very good reason.

See? IFI has some really good stuff on the way. The hyper-niche publisher continues to impress with both the quantity and quality of what it’s bringing to market for fans of Japanese games.

We have a release date for Blue Reflection: Second Light – yes!