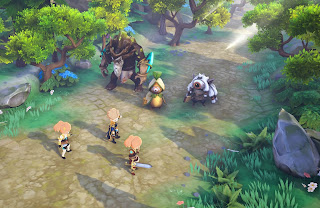 The original Valthirian Arc was a pretty decent little game. It wasn’t something completely memorable, but as we noted in our review: “Valthirian Arc: Hero School offers a quaint, if not overly original concept… It’s easy to pick up and play for short bursts, and as a simulator, its simplicity makes for a nice change of pace. It’s also charming and actually does offer an intriguing world and narrative.”

However, we also concluded that “the game could also have been much more than it is,” and so here we have Valthirian Arc: Hero School Story 2, which no-doubt aims to do just that. Published by PQube and developed by Agate, the game will now have an Early Access release this “summer” (winter for those of us in the southern hemisphere), and promises a bevvy of features that will hopefully mesh together beautifully.

– Become the principal of a brand-new hero academy and run it your way
– Nurture brave young students to reach their heroic potential
– Challenging turn-based combat with unique tactical puzzle mechanics
– Design your school from the décor to students’ course of study, improve your reputation and become a top-grade academy!
– Explore a vibrant and dynamic world with many regions and factions
– Hours of gameplay including story, management sim and combat

There’s also a shiny trailer to enjoy! I’m not usually big on Early Access games, but this one does look like it’ll be fun to get in with on ground level and participate in its ongoing development.
– Matt S.