With the latest, incredible large dump of games to Apple Arcade, it’s easy to miss some of the other recent releases. I actually just discovered mystery adventure game Hitchhiker yesterday while installing other games (okay, mostly just Fantasian) on my Apple TV, and got it immediately. I haven’t played it yet though, so I’m wondering if I should throw the developer an extra bone and outright purchase it following the announcement that the title will be coming to PC and consoles. Before we get into details, let’s watch the latest teaser:

Set along lost highways, the player’s goal is discover the hitchhiker’s backstory. With no memory of the past or idea of where to go moving forward, they catch rides across strange yet beautiful landscapes, tracking someone’s disappearance. They catch five rides from five drivers, each with their own story to tell. Along the way, solve environmental puzzles, discover clues, and form alliances.

Hitchhiker was released for Apple Arcade last month. It will launch for PC via Steam, PlayStation 4, Nintendo Switch, and Xbox One on April 15 (or now, depending on what time you’re reading this). It is developed by Mad About Pandas (aren’t we all?) and published by Versus Evil.

Little Witch in the Woods coming to Early Access

Planned for a full launch in the first half of 2022, Little Witch in the Woods now has a Steam page that confirms the game will launch as an Early Access title sometime this year. The game follows Ellie, an apprentice witch who goes to a special Witch House to help the nearby village and its residents. It follows her daily life while there. 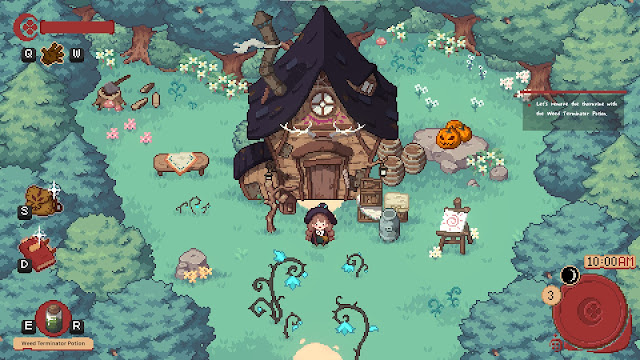 The story follows Ellie’s experience as an apprentice through successful completion. She’ll need to practice her magic while helping make the world a better place. She will gather and process materials to make potions, helpful for solving problems. Becoming good friends with villagers will allow her to hear their deepest secrets. To move friendships along, Ellie needs to chat with them to learn of their tastes and give them relevant gifts. Villagers aren’t the only ones to befriend, as there are cute creatures to meet in unique areas. And since Ellie is a witch, of course there are cats everywhere; fateful encounters with the beautiful creatures could lead to them wanting to be with her daily.

Little Witch in the Woods’ Early Access version includes the beginning of the story and core gameplay. There are two stories to play, seven characters (or more) to meet, two areas to explore, more than 10 different animals and plants to discover, and potions to make. This version will have English and Korean language options. Developer Sunny Side Up explains this decision on the game’s Steam page, stating, “We consider it important to understand the experiences players feel while playing games. It can help us provide a better experience for players. We expect to be able to get insights from not developers but players during Early Access. The insights help us make Little Witch in the Woods better.” The full version will include full stories; additional activities, regions, items, and characters; and support for more languages.

Acorn Bringer has announced its upcoming title, Of Love & Eternity. It’s described as a stylistic horror adventure game set in the void, basically a bad dream with no end in sight. The game will launch which will launch for PC/Mac/Linux via Itch.io; a short demo that the developer describes as “an alpha stage or vertical slice of the game’s systems” is currently available. Take a look at the demo trailer:

Whoever you are, you are dead. Actually, your life was taken in a rather unnatural way to due to murder. Your soul will no wander the void, a lost and broken memory. Your beloved has equally suffered, with their fractured soul also inhabiting the void, although where remains to be seen. Instead of passing on when the time comes, souls don’t pass on; rather, they fall to an in-between world of the damned. Violent and wicked spirits can be found here, hoping you will join them. The only way to escape is reuniting with your true love so your souls can become whole once more.

The final game will feature ten parts, already planned with content creation underway. Things could shift as the Acorn Bringer receives player feedback. On the Itch.io page, the developer states that the title starting as a feeling, became a story, and finally ended as a game. They also state, “While merely a short demo as of now, I hope that it conveys enough of my vision to capture people’s imagination.”

Watching Dontnod Entertainment grow from a single development studio to multiple studios (the latest is in Montreal) as well as a publisher has been really lovely to see. Its developed titles have deep storylines and themes, with relatable characters. Publishing is still relatively new, though. The latest in news relating to this is that it will publish a new PortaPlay title that is currently in production. Do we know what exactly that game is? No. But do I trust Dontnod? Absolutely. (Although as Wales Interactive unfortunately helped prove recently with the mediocre I Saw Black Clouds, there is still no guarantee.)

Last year, Dontnod announced two new departments, one for marketing and one for publishing. This is how the company plans to support any future game releases, whether internally or externally developed. Whatever PortaPlay’s game is, it will be the first published by this new publishing arm. “As a publisher, we want to offer players experiences that are both accessible to the wider audience, while setting the bar high regarding themes and quality of design,” states Dontnod Entertainment’s head of publishing, Xavier Spinat, via a press release. “From our first discussions with PortaPlay, it became clear to us that co-producing and publishing this original creation would allow us to expand our portfolio with a game complementary to our in-house productions, while remaining true to our DNA.”

Dutch studio PortaPlay comprises of roughly ten people. Its portfolio includes games (Safe & Son, Broken Lines, Tales from the Void), engagement tools (Artist Studio Unlocked), learning tools (Big Ocean Window Digital Aquarium), and interactive documentaries (Turth Hunter, Deadline Syria). It has worked with big names, including BBC. When it comes to its newfound partnership with Dontnod, PortaPlay head of development Hans von Knut Skovfoged adds to Spinat’s comments, stating, “We feel called to work on games with meaning. Games combining solid game mechanics and storytelling – about individuals in crisis situations tackling moral dilemmas. This new partnership is thus a great opportunity to us. Not only does it give us the opportunity to communicate with all the fans of Dontnod’s fantastic catalogue of games, but it also allows us to work with some of the best minds in this field.”

SaGa Frontier Remastered: Why I love this remade JRPG classic