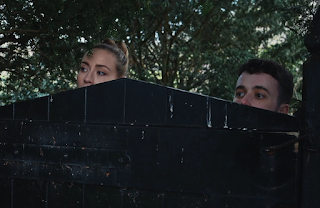 Review by Lindsay M.
There is nothing like a dark, dreary, and rainy day to play a spooky title, and the stars aligned in such a manner when I first played I Saw Black Clouds. I was basically alone as my spouse was locked in the office working; there wasn’t even a cat around to keep me company, which is a rare occurrence. Basically, it was the perfect setting. FMV games (more specifically, in this case, interactive films) always excite me because they make it so easy to enjoy a branching narrative.

I Saw Black Clouds is produced/developed by Ghost Dog Films, an independent company with a couple of films to its name. This, however, is its first foray into interactive films (or FMV video games – six of one, half-dozen of another). The title is published by Wales Interactive, which I quite trust when it comes to FMV titles; it has published gems such as The Infectious Madness of Doctor Dekker, The Complex, and Five Dates. Below is the latest trailer, though you can ignore the pre-order screen as the game is available now.
The game focuses on Kristina, who returns to her hometown (a charming, peaceful, leafy place that I grew rather fond of) following the tragic death of one of her best friends. Before it even begins, a content warning is displayed; it warns players that the game “contains scenes that some viewers may find disturbing … including graphic depictions of violence and suicide.” And it most certainly does. Repeatedly. Not in a bad or overused way, it’s just that the narrative requires those elements to function and if they were only mentioned in passing it would be far less effective.

But back to Kristina. Her dearly departed friend, Emily, was being haunted, tortured by someone… or something. Something dark. She also learned secrets too scary to even write down. It is made clear quite quickly to expect jump scares; each is used entirely to advance the story. I’m not going to lie, I am massively wimpy and anything even vaguely spooky will scare the bejesus out of me. I Saw The Black Clouds is a bit predictable, I nearly always knew when a jump scare was coming so I’d cover my eyes and peek between my fingers. The music and sound are quite good at amping the tension. It’s not at the same level as, say, The Shining, but it definitely makes my heart beat a bit faster than it would otherwise while appropriately signalling me to shield my eyes.

One version of the story was my favourite, and it takes the supernatural route. This path contains more jump scares than the others. It feels like a classic ghost story: tragic origin, tragic results, disembodied voices, weird time anomalies, creepy abandoned buildings, dark shadow figures, a curse… there’s even a lady in the lake. A local legend seems to make sense of these occurrences; I won’t ruin it, but it’s another classic horror trope that fits in quite well with the rest of the story. The result of the story-within-the-story is a curse that the townsfolk legitimately seem to believe is real.

The supernatural story isn’t the only narrative available, as there are branching paths resulting in four different endings. One of the story paths makes very little sense. Another ends the same as the prior, but makes much more sense. The beginnings were the same (obviously), the middles split in drastically different directions, and some of the endings was shared between the two (very similar but not identical situations). Stories meet and split apart, meet and split apart. I always like doing two back-to-back runs with completely different choices. In the first, I run head-first at issues. I don’t avoid anything. I just go without thinking. If it’s a directional choice, I always go left. The second, if I can be avoided, I will definitely avoid it. Directionally, I always go right. Logically speaking, this would result in two different endings. Not so much here, though. I’ll get into that more a bit later. 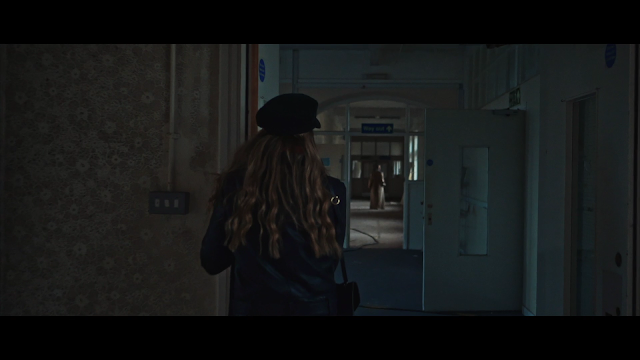 The role of Kristina is played by Nicole O’Neill, whose past work includes Red Sparrow and Penny Dreadful. Aside from Emily (Carla Cresswell), who we see very little of, Kristina has two friends: Charlotte (Rachel Jackson), an old friend who formed a trio with Emily and Kristina, and Jack (Aaron Jeffcoate), a new friend who seems quite intent on being helpful despite also being a bit afraid. The performances of these four, as well as the other actors, were solid and relatively believable, though nothing to write home about.

The stats screen, accessible via the trackpad, puts Kristina’s experience into numbers affected by her decisions. There are three story stats (denial, acceptance, guilt), five character stats (honesty, strength, mortality, tact, introspection), and two relationship stats (Charlotte, Jack). Kristina’s decisions are often story-related, such as what she should do or what she wants to say. Other times, it’s simply a case of choosing which direction she moves in. Now that I think about it, there are quite a lot of these directional decisions. I don’t entirely know how much they affect the story paths or ending, though.

But here’s an odd thing: while being my preferred storyline, the supernatural path actually seems like an afterthought, a means to the end but nothing more. I even somehow missed Jack, despite there being a specific statistic about him. There are only two characters listed on the statistics screen, and I only meet one? That’s questionable. 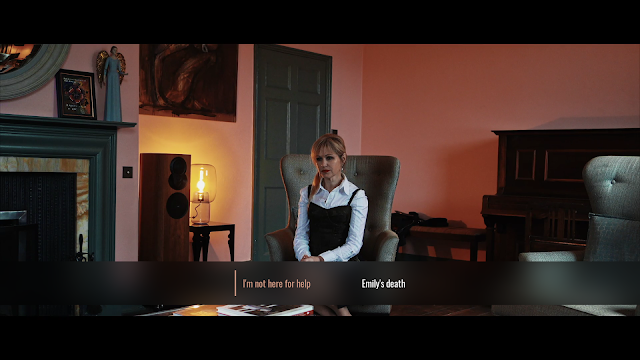 One playthrough takes roughly two hours, or the length of a standard feature film. Time can add up in Streamer Mode, which allows players to pause choices. I must give kudos to this being a setting, not from a streamer’s standpoint but from an accessibility one. On days when my brain is two beats too slow or my brain doesn’t seem connected to my hands, I still have time to make decisions. Later runs can be completed more quickly, as previously viewed scenes are able to be skipped. There are a couple settings for when subtitles are turned on, size and contrast. As usual, I’d love to see a font setting, but appreciate any options past off/on.

Remember way back at the beginning of this review, when I talked about how I Saw Black Clouds is Ghost Dog Films first interactive film? Well, unfortunately, it shows. The main issue is that nobody over there seems to actually have an understanding of how these games should function. Normally, I wouldn’t be so fussed about little things that don’t make sense to me, or are slightly off, but the list of these items is as long as my arm at this point and some are quite bothersome. The issues aren’t everywhere, but they are noticeable when they occur. And some are downright detrimental. I often only give these things a sentence or two in a review and move on. But in my experience, that tends to be where problems end in FMV games. And that’s not where the problems end.

Some of the issues are technical. There are some sketchy audio bits involving cackling, janky video transitions, that kind of thing. The game froze a handful of times over several hours, always upon making a decision but never when I made the same decision. With choice timing it seemed a bit weird. Sometimes the options will pop up several seconds before someone is done talking; it even happens during silence, which made me think I had missed something when really it was just a pause. Sometimes you choose an option but Kristina’s actual response doesn’t even relate in any way; it’s like the developer gives you the option and then doesn’t really care what the player’s choice is. Sometimes the player is outright forced into a decision that they don’t want to make. I understand this is needed for plot sometimes, but don’t give me a choice if there’s not actually a difference in what will happen. 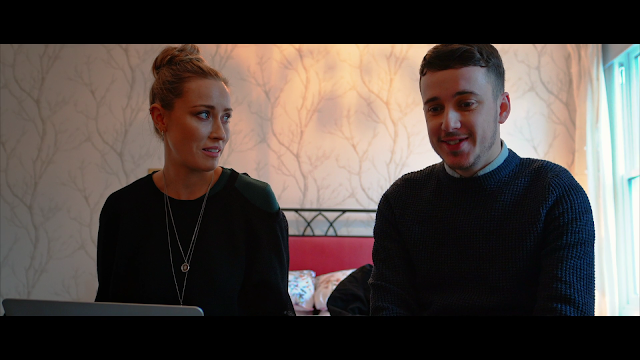 And this leads me to my main complaint about I Saw Black Clouds: nothing I do seems to matter. I can see my stats change, I can make completely different decisions, I can experience radically different stories, and still have the exact same outcome. Where are those other three endings? There’s usually some hint, an obvious point for two different branches to spread apart, but there is nothing like that here.

In interactive films, stats pages can often help guide players to what may need to be different to get a different outcome. Not this time. My stats were quite different alongside the story, and still, the same ending. Specifically, there were noticeable differences (some large) in denial, guilt, relationship with Charlotte, honesty, morality, tact, and introspection. I’m lost at where to make changes if I start a new game, which makes me not want to play it again, and that makes me sad because I normally get three to five runs out of FMV titles but I am quitting at two this time around.

I can’t even make sense of the stats. How can I be both 100 per cent “accepting” and 80 per cent “in denial” when those are completely opposite traits? And why are there two friendship meters, one for Charlotte and one for Jack, if there is even the remote possibility of not encountering Jack at any point? I didn’t notice him the first time around.

I’m legitimately upset that I didn’t enjoy I Saw Black Clouds more. It seemed to have so much promise. There were glimmers of hope – I really enjoyed the classic ghost story until that was yanked into another direction, one that I still don’t think makes a whole lot of sense. Unfortunately, the entire story seems too far-fetched, minus the supernatural aspect of all things. As far as I can tell, there’s only one general direction it ever takes in the end, although I remain hopeful for those other endings. The biggest problem with the game is that choices are literally the entirety of gameplay but they don’t seem to matter half the time anyway, so the entire thing feels like an exercise in futility. And all that nonsense and non-decisions really dragged it down.

Sony is no friend to the arts