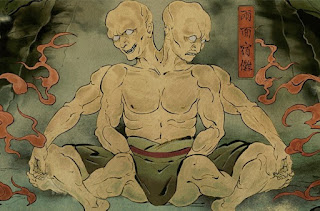 Nippon Ichi over in Japan has announced that Shin Hayarigami 3, the latest in its horror visual novel series will release on July 29, for PlayStation 4 and Nintendo Switch. There’s no news of a western release just yet, so please do let NISA know that you’re interested in playing this one.

Because it’s a really good looking game. Based on the concept of urban legends, it taps into a similar sense of horror as Experience Inc’s Death Mark and Spirit Hunter: Ng visual novels, and who doesn’t like a good urban legend chiller? Especially in Japan. That country is crazy for creepy ghost stories.

I mean, just get a whiff of just one of the stories that you’ll get to encounter in this game. It’s called “Human Stew,” and goes like this: “An old man living alone unfortunately died while bathing in reheated bath water. Days later, when a friend who discovered his corpse touched the old man’s remains, it crumbled and the bathtub became like stew…”

Gross and creepy as heck. There are also stories that feature long-haired women, dolls, a two-headed mummy… yes, Shin Hayarigami 3 could be something very special indeed.

While we wait and hope for a localisation announcement, enjoy the latest trailer: