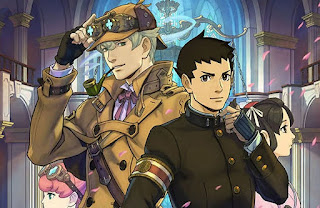 It’s always nice to wake up to good news. Capcom has announced that The Great Ace Attorney series – that being 1 and 2 – will be coming to the west for the PlayStation 4, Nintendo Switch and PC (via Steam).

Now for those who haven’t heard of these games before, they’re set during the late 19th century, as an ancestor of Phoenix Wright does… well, much the same thing as Wright would get up to, generations later. You play as Ryunosuke Naruhodo, through ten full cases across the two games, and of course, there will be all the oddball humour and other such nonsense that the series is known for. I mean, one of the characters you’ll bump up against is Herlock Sholmes. Yep (bonus points if you get that name as a reference to Arsene Lupin).

This is the first time these two games will be officially available to western audiences. Best of all, you won’t even have to wait long for them – they release on July 27!

For many, the Phoenix Wright titles are the “gateway drug” into visual novels, so hopefully, these games keep that tradition going in style. They’re well-regarded in Japan, so I’m sure they’ll go down a treat here as well.

The Final Fantasy XIV photobook is just the most wonderful idea

Tales of Arise FINALLY has a release date