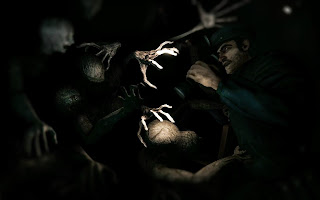 Song of Horror has done alright for itself over on PC. Across the five chapters released for the game, it has had an 83 per cent positive user review score across nearly 1,000 reviews. Now the game’s coming to PlayStation 4 and Xbox One.

What’s more, you’re not going to have to wait long for it at all, as it releases on May 28, with all the chapters in one go.

Song of Horror bills itself as a stalker horror game, principally, with the goal being to run and hide from the menace that threatens you. The main hook that the game promises is that the entity that’s chasing you is AI-powered and will adapt to your decisions and play style. So many stalker horror games have things just show up completely at random, or are totally scripted, so this has the potential to be a big step forward.


This is also a game inspired by the classics – so we’re talking fixed camera angles like Resident Evil, and locations like a forgotten abbey and an abandoned asylum, filled with puzzles to solve.

This does very much look like a game to look out for, and the perfect fit for a console experience. It’s just a pity there’s no Switch version, for chills on the go.