Red Candle Games has launched its own e-shop, finally releasing Devotion to the world once more. All past and future products by the developer are or will be available via the shop in DRM format. Devotion has had quite a roller coaster journey to this point, but before we talk about that, check out this trailer so you know what I’m on about:

And now we’ve come to the roller coaster that is Devotion. DDnet’s editor-in-chief was quite excited for it, as he gave its predecessor five stars in his review. It launched for PC via Steam in February 2019, but was removed bu the end of the month. The reason? A controversial reference to Chinese president Xi Jinping. Red Candle fans were thrilled when the developer announced the game would be published again, this time via GOG; it took what felt like a blink of an eye for GOG to go back on that decision, though. Users and YouTube seem to think Red Candle can just publish it again on Steam, but if only it were that easy. Instead, it has made its own store, where it won’t be censored by publishing platforms.

Nintendo has announced its next free update for Animal Crossing: New Horizons, which will launch tomorrow (March 18 in North America). It’s been a year since its launch, and what a year it has been! This update will include seasonal items items, new Sanrio-themed amiibo cards, and an upgraded custom design app. 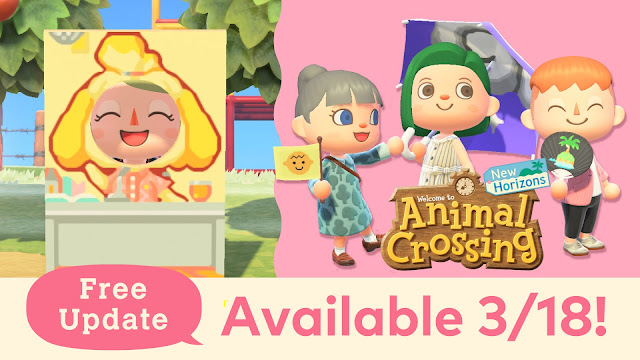 Let’s be real, all of the excitement lies with the Sanrio collaboration. It is not the first time Nintendo has collaborated with the world of Hello Kitty and friends; the last time was a limited time event in Animal Crossing: Pocket Camp that gave players access to a handful of Sanrio characters to invite to their camps. Actually, players coming into the game later are quite upset that Nintendo has said the Sanrio event is one of the few that won’t have reissued items available, so hopefully the New Horizons collaboration will cure that desire. Beginning March 26, an Animal Crossing Sanrio Collaboration Pack featuring six amiibo cards will be available for purchase. Basically, it’s physical DLC, which is quite the novelty these days. With the cards come characters, themed furniture, and themed fashion items.

When it comes to seasonal items, there’s several to look forward to. A 1st Anniversary Cake will be available to celebrate the game’s anniversary, and will be sent to players’ inboxes as soon as the update is installed. A variety of whoopee cushions can be ordered from March 26 to April 1 from the Nook Shopping service. From April 1 to April 30, there will be prom-themed items available at the Able Sisters shop and via Nook Shopping; this includes both clothing and design elements. Finally, use Nook Miles at the Nook Stop to unlock the Customer Design Pro Editor +, which allows for customisation on items such as umbrellas, small flags, uchiwa and photo stands. There is also an increase of 50 slots added to the Normal Custom Design mode and Pro Custom Design mode.

Originally launched for Apple Arcade, Murder Mystery Machine is set to launch on new platforms “soon,” although what publisher Blazing Griffin Games means by that is beyond me. Join the District Crime Agency and help two detectives, a rookie and a veteran, solve cases. Here’s a trailer:

Frank Daniels, a local politician, is found dead. It appears as though he was the target of a burglary. It doesn’t take long for detectives to realise the case relates to a series of other crimes. Collect evidence and use deductive skills to recreate what you believe happened when the crime was committed. Aside from deduction, accurately solving the case and properly accusing the perpetrator are important parts of being a detective. The game sports a modern noir world, with dark scenes lit by neon glows. Each crime scene is a diorama that can be rotated and zoomed in on as needed (or just to see it, really).

Murder Mystery Machine first launched for Apple Arcade about a year and a half ago. It will soon be launched digitally for PC (via Steam), PlayStation 4, Nintendo Switch, and Xbox One. “By launching Murder Mystery Machine on new platforms, we’re pleased to allow more players to enjoy this unique and thrilling experience,” states Vincent Dondaine, VP of Microids Indie, via a press release. “We’re proud to accompany Blazing Griffin through this process, a studio renowned for the quality of their previous games such as The Ship: Remasted and Murderous Pursuits.”

Make friends with a Shiba Inu later this year

Yes, I have an affinity for cute furry animals. No, I’m not ashamed by it – so of course I’m excited for a game about befriending a dog! Developer Foxdog Farms has announced A Shiba Story, expected to launch later this year for PC via Steam. Take a look at the announcement trailer:

The player takes on the role of a rookie dogsitter asked to care for their uncle’s Shiba Inu, Sunday. Sunday is cute, sure, but he’s also stubborn, difficult, and refuses your affection at every chance. The aim is to actually make this dog like you while learning how to care for him. You’ll learn to read his mood based on tail wags, ear wiggles, and barks. By earning trust, Sunday will learn new tricks like wearing silly hats.

The setting is a neighbourhood based on San Fransisco. As the two of you walk about, you’ll need to scoop poop, play fetch, groom, and explore while making memories together. Sunday will even have a chance to play with other dogs… and perhaps even a cat! Befriend to dog enough to pet him and it will all be worth it.