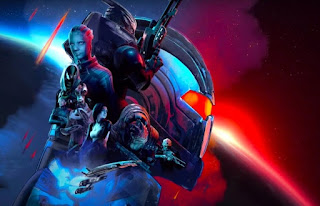 If we all forget that Mass Effect: Andromeda exists, the Mass Effect series has been some of the most intelligent and artful work that EA has produced in the last 20 years or so. You can even write think pieces about Mass Effect’s themes and philosophy, and that’s more than can be said than with anything else EA has done recently.

So Mass Effect Legendary Edition should be exciting. It features all the single-player stuff (DLC and all) across Mass Effect 1, 2, and 3. Sadly it doesn’t include the multiplayer from ME3, which was actually pretty good, but you do get some massively improved visuals and quality of life improvements to make these titles the ultimate version of their respective visions.

The collection releases on March 14, for PlayStation 4, Xbox One and PC, and therein lies the rub for me: where the hell is the Nintendo Switch version? I was really looking forward to playing Mass Effect on the go, and was holding out hope that they’d add a Switch release at the last minute. It’s not to be, sadly.

Interview: 14 games and counting… why Romance of the Three Kingdoms is still going strong