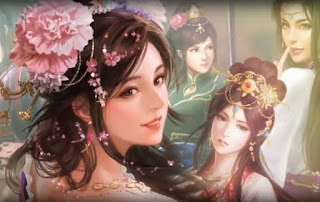 China, as one of the oldest continuous cultures and nations on the planet, has a long and deep literary history. Some of its greatest masterpieces were written well before Europeans invaded places like America and Australia and re-drew the maps to suit their colonial expansion. Across all of that history and literary tradition, four books have emerged as being of particular reverence to the Chinese, and these four books have had an impact on video games that is larger than many people realise.

The Four Great Classic Novels, as they are known, have inspired game after game for generations now (or, at least, three of them have. The fourth we’ll get to). The reason for it is quite simple and two-fold; firstly they’re large, meaty texts that offer up plenty of adventure and excitement, which makes them good material for adaptation to the video game format, with the extended playtime of most games. For example, Romeo & Juliet would be difficult to turn into a full-length commercial game because the entire performance of it is two hours long. Meanwhile, Romance of the Three Kingdoms is over 2,000 pages long and ideal for a 30-40-hour long game. Secondly, while audiences in the west are generally quite ignorant of the four books (school curricula in western nations tend to believe that culture starts and stops with the west), Japan and China, for all the antagonism between the two nations, are geographic and cultural neighbours, and those four books are well-read and celebrated among the Japanese developers by the time they’re finished up with school and entering the games industry.

As a result of those two factors, we have a thriving library of games that are based on these books, and indeed for those of us in the west, the games are an excellent and accessible introduction to the books, which tend to be quite archaic and dense to read by modern standards. Briefly below I’m going to describe each book, and point you to some games that you can play to start to learn what each is about.

Without a doubt the “big one” from the group. Romance of the Three Kingdoms is a breathtaking masterpiece of historical epic fiction. It’s more than double the length of War and Peace, contains thousands of characters and hundreds of battles, and describes a period of warfare and civil strife within China that lasted for decades. Written in the 14th century by Luo Guanzhong, it is not a perfect historical account (in fact, Guanzhong completely made up critical characters to give historical characters motivations to do what they did – he completely invented Diochan as a temptress so pretty that she convinced Lu Bu to just up and kill his adopted father), and certain characters are written up as villains in such a way that is almost certainly not true to the historical record. However, it is a thrilling account of the time, filled with swordplay and heroics, and truly paints a majestic painting of the era.


That book has inspired more video game adaptations than any other, including the actual Romance of the Three Kingdoms series. Every Dynasty Warriors title is an interpretation of the book, too (and a more authentic abstraction than many realise until they’ve read the book), and Total War: Three Kingdoms is also a take on this era from a western perspective. Capcom’s excellent side-scrolling brawler, Warriors of Fate, is another take on the Three Kingdoms characters and era, and for more fast-paced action, there is the fanservicey Koihime Enbu fighting game as an offshoot of Koihime Muso, a series of adult visual novels based on the era. For retro fans there are plenty of older titles too, including the strategy/JRPG Destiny of an Emperor (NES) and, on PC, early-era RTS, Three Kingdoms: Fate of the Dragon. Finally, there’s a Chinese-developed series that has never really been released in English, but now stands at eight main-series titles, and the latest one being released just this year. That series is Heroes of the Three Kingdoms, and based on the screenshots and such from the Steam page for the eighth in the series, it is one that I would very much like to see some localiser pick up.

Journey to the West

This is comfortably the second most popular of the four classic books on a global basis, though its popularity has more to do with a certain television show that many of us grew up with. Remember Monkey, which premiered back in 1978 and only lasted two seasons (it really felt like there was more than that) and was then repeated many times in the years since? Monkey is a comedic (but reasonably faithful) adaptation of Journey to the West. What’s interesting about Journey to the West is that people tend to know of it and its main character, but are less familiar with the actual narrative – I’m not sure many go on to actually read this book. It was written by Wu Cheng’en, it is effectively a Buddhist thesis masquerading as a road trip from the east coast of China to India. In a really odd way, it mirrors the classic Christian propaganda novel, The Pilgrim’s Journey.

In terms of video games that are based on this story, there have been a few. Koei Tecmo produced an excellent Final Fantasy Tactics-like take on the tale with Saiyuki: Journey West on the PlayStation One, and western developer, Ninja Theory, presented an action-adventure take on the character with Enslaved: Odyssey to the West on the PlayStation 3. However, the book’s influence on the world of video games is not so much about direct adaptation as it is more to do with the popular “Monkey” character of the novel – Sun Wukong – who has popped up in or explicitly inspired character design in League of Legends, Dota 2, Paragon, Smite, Persona, Shin Megami Tensei, Warriors Orochi, Summoner’s War, Ori, Overwatch and Pokemon… among others. It’s quite the resume.

Finally, Chinese developer, Game Science, is also in the middle of developing an authentic take on Sun Wukong and his exploits with the upcoming Black Myth: Wukong, and it looks spectacular.

With Water Margin we get to the more obscure end of the group of four books. Water Margin actually happens to be my personal favourite, because it’s about outlaws and adventure and things. I was a big-time Robin Hood romantic as a kid, too. Written by Shi Nai-an, Water Margin is based (fairly loosely) on the story of historical figure Song Jiang and his band of bandits, and its call for the common people to stand up and resist the corrupt ruling class is… well, it’s a story that has had particular resonance throughout Chinese history, earning the book its place as a classic. More than anything else, though, it’s a fun book to read, with a heavy dose of humour, surprisingly racy tone at times (which even saw it denounced as “obscene” at points), and, of course, plenty of action.

By far the best-known game to be based on this classic novel is Suikoden – the title of Konami’s now-ignored JRPG series coming from the “108 spirits” that formed the gang of bandits. That’s why that series has so many characters, you see? It was because the book did. Otherwise, Koei (again, Koei! That company owes so much to Chinese literature) released an excellent strategy game way back on the NES called Bandit Kings of Ancient China, and then a remake of it for the PlayStation and Sega Saturn. Other than that the most notable influence of Water Margin on video games would be Jade Empire, BioWare’s largely forgotten classic, which had characters that were directly taken from the book.

Dream of the Red Chamber

Finally, we come to the book that has had almost no impact on video games, and is often overlooked as a result (though it is one of the four great classics for a reason). Dream of the Red Chamber was written by Cao Xueqin, and is much more contemporary, having been published in the 18th century. The book tracks the rise and fall of Xueqin’s own family within Chinese nobility. Where the other novels could be broadly considered historical epics or even “action adventures,” one of the reasons that Dream of the Red Chamber is less obvious video game material is because its strengths as a work of literature lie in the accurate and acute observations that it makes of the society and culture of the era. It’s not as outwardly exciting, in other words.

Oh, and it’s almost impossible to translate in a way that maintains its potency and is worth reading. If you’re keen on checking it out, a professor that specialised in the study of just this book (they exist), named David Hawkes, has done the best and most celebrated job of it. What the difficulty in translating it means, however, is that Dream of the Red Chamber is an exceedingly niche book to consider adapting to video game form.

It’s also a book that the Chinese hold particularly sacred. Turning Romance of the Three Kingdoms into a lewd adult visual novel was one thing. The Chinese tolerated Koihime Muso. When a Japanese developer took a crack at that with a game called Slaves of the Red Mansion, it blew up in their faces spectacularly and drew criticism from the government itself (given that the theme of the game was “a fantasy game about girls sold into sexual slavery, you’ve got to think that even the CCP have a point here though). Of more earnest adaptation efforts, other than a video intro to what looks to be a Chinese visual novel adaptation of the book (and doesn’t seem to exist any more), I can’t find any other attempt to turn this book into a video game, sadly. Someone should get on that.

And there you have it. Four masterpieces of literature that weren’t written by white people, and three of them significantly influential on video games in one way or another. When you think about it, it is impressive in a way that all of these games exist, because when you look at western game development, the book that has influenced the most games has been Tom Clancy, and I can assure you all, right here and right now, even his better works like Rainbox Six is not up to the standard of any of these four books. Books like The Witcher series and Metro are fun reads, but hardly War and Peace or the Hunchback of Notre Dame. Actual masterpieces of western literature very rarely get spun into video games (Lord of the Rings aside… and even then it was only because of the films).

Perhaps “our” developers should be looking to literature for more inspiration than they are currently.