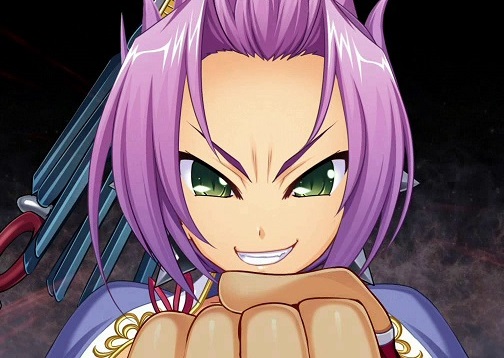 Koihime Enbu is a fighting game spinoff from the Koihime Musou franchise. If “musou” catches your attention because you’re a fan of Koei Tecmo’s Dynasty and Sengoku Musou (i.e. Warriors) franchises, don’t think that Koihime Musou is the same. It is indeed set in the same period as the Dynasty Warriors titles – the era of history that the classic book Romance of the Three Kingdoms covers. Koihime Musou is also, however, quite a different experience. For one thing it replaces all the male warlords of the era with women. For the other, as a series of adult visual novels/ strategy games there’s plenty of outright pornographic imagery to go around.

Koihime Enbu, and its enhanced semi-sequel, Koihime Enbu RyoRaiRai, aren’t adult games like the series they are based on. They’re still an all-girl cast and of course there’s a bit of fanservice (though surprisingly little given where the game comes from), but for the most part these games aim to be clean, stylish, and straightforward 2D fighters. And the good news is that they have largely succeeded at that.

The first thing that you’ll notice when starting the game is how minimalist it is. The “main” gameplay mode is the Arcade mode, which involves tiny snippets of dialogue that won’t mean much unless you’re already familiar with the base franchise (or, at least, the anime). That’s the extent of the game’s story. Other modes include the obligatory versus mode for both online and offline, as well as a training mode and a gallery for stuff that you’ll unlock as you play. But there’s no survival mode, no time attack, or any of the other alternative challenges that we’ve come to expect from 2D fighters. Truly BlazBlue has spoiled us all, because I do genuinely expect that these anime fighting games will have visual novel-like story modes too. There’s enough material out there that Koihime Enbu could have done that easily enough. 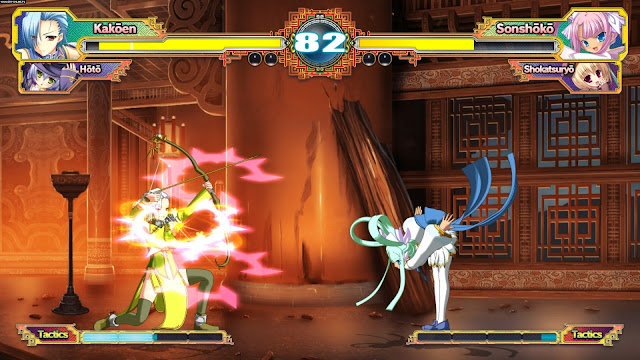 The game also has what I would consider to be a healthy sized roster, with 14 playable characters characters, but many others would consider that to be unacceptably small by today’s standards. The initial impression that many will be left with, in other words, is that Koihime Enbu is too limited for its own good.

Luckily for the game, it’s an absolute delight to play, and I do love these characters. Koihime Enbu belongs to that wonderful tradition that Japanese harem anime loves to indulge in, in replacing male characters from history with an all-female cast. The Ambition of Oda Nobuna did it with the samurai heroes of the Sengoku period. Eiyuu Senki went global and turned everyone from King Arthur and Marco Polo to Vlad the Impaler and Geronimo into gorgeous girls. Each time this harem sub-genre throws some hapless dude into a world where all the fighting, conquering and heroism is done by women, and of course he then gets to go date them all.

Koihime Musou also had one of those hapless male characters, Koihime Enbu does not, but nonetheless that heritage remains palpable through the game. And while there’s none of the nudity and sex scenes that the base material relishes in, Koihime Enbu has stunning painterly backdrops that really help set the scene and remind players of the game’s heritage. Those backdrops are purely static, and again, this will appear limited to people who are used to vibrant, fully animated and 3D modelled backgrounds in bigger budget fighters, but the visual design is so strong that I don’t care. 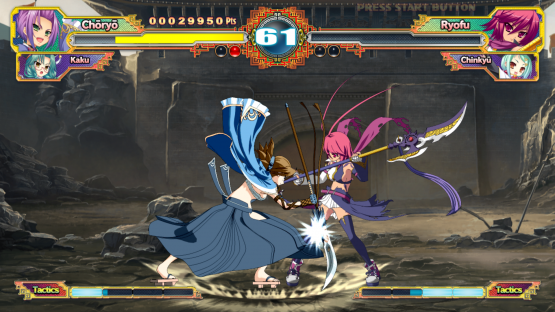 The animation of the characters is clearly where the developers clearly spent a lot of energy, and that makes sense, given that a fighting game needs the best quality animation possible to support the complex gameplay systems. Each of Koihime Enbu’s characters move with distinct personality and style, and have different enough combat styles that the roster size of 14 starts to feel “right” after a while – the balance is there and there’ no real dud characters.

It’s quite an accessible fighting game too, though it perhaps doesn’t do enough to dissuade button mashing. Koihime Enbu’s combat system is classical in the way that it enables an experienced player to go on lengthy combos that keep knocking the opponent around with little chance to recover. That can be annoying, but on the other hand, health bars do take a while to whittle down, so being hit by a lengthy combo isn’t a virtual game over. Overall, I like the combat system that Koihime Enbu offers. I don’t feel like I need to spend hours in the training section learning the most detailed intricacies of each character in order to pull off the specific set of moves that I need to to win with that character. Rather, it’s the kind of game that two people of different levels of familiarity with the game can pick up and have a good time with.

I also appreciated that there is a relative lack of additional systems that you need to deal with in this game. You can take a support character into battle, and there’s a single “tactics” meter that builds up through a fight that you can use to launch special abilities, but that’s about the sum of it. For the most part this is, as I wrote earlier, one of those classical fighting games. 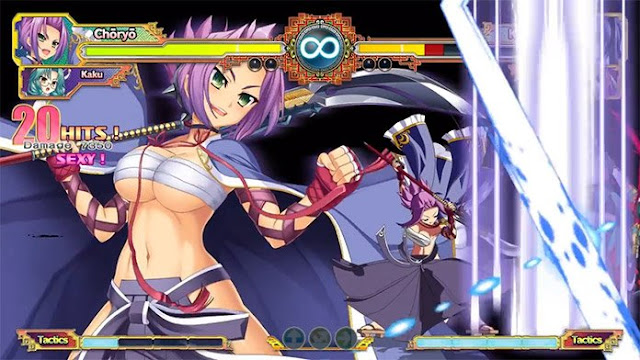 Of course, Koihime Enbu RyoRaiRai is going to be one very niche fighting game on the PlayStation 4. Very few people in the west will care about the extended franchise that it comes from, being adult visual novels, and those that are fans enough of Koihime Musou have been able to buy the previous version of Koihimi Enbu on PC. I hope some people discover it though, because there really is a good little fighting game in there.

Photo of the day! Kabukicho at night