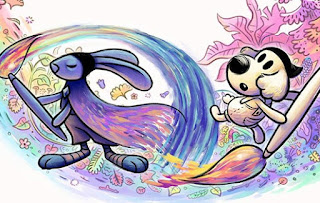 Cuphead really paved the way for a revival of older, more traditional animation styles to become an aesthetic in video games, and it’s something I am very much here for. At this stage, the only issue with Chicory: A Colorful Tale is the lack of localisation of the word “color”.

But seriously, this game was a wild success on Kickstarter in 2019, raising more than double its goal. There will now be PlayStation 5 and 4 versions of the game to go with the PC and Mac versions that were already on their way.

The game describes itself as “Zelda in a colouring book world, with a dash of Animal Crossing,” and that, to me, means a light-hearted and low-pressure adventure game. From the trailer, we can see that it also has a good sense of humour. Hopefully, the game’s also a celebration of art like it looks like it could be, and not just a gimmick for humour.

Either way, I am very much looking forward to this game.