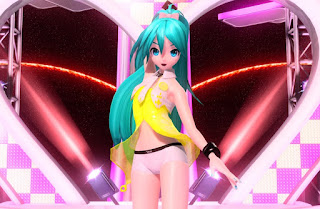 You heard that right. Hatsune Miku, great goddess that she is, having totally conquered the music world, is now set to take on the television world. According to a report on Deadline, Miku’s creator, Crypton, is partnering with Carlin West Agency and Graphic India to develop an “original animated series” featuring the girl herself.

In addition to that TV series, the trio will produce a series of webtoons and comics as well, kicking off what the article calls the “Mikuverse” (and yes, that is a really cringey, American way to frame it, but hey, I’m just excited that Miku’s going be beamed right into my TV).

Graphic India will be handling the bulk of the creative duties, and there are a few red flags, to be sober here for a moment. “The companies have begun development toward a modern, entertaining story with an exciting new look for Hatsune Miku,” the news article reports (emphasis mine). Given that Graphic India is not a Japanese company, there should be the worry that their interpretation of Miku will miss the mark on what is an iconically Japanese character. What’s more, “the new Hatsune Miku series will be created by Sharad Devarajan and Carlin West and a team of esteemed writers and artists” (again, emphasis mine). You generally get “teams of writers” on to a project when what they’re writing is less important than ensuring that there is plenty of carefully curated content that hits a brief.

A quick look at Graphic India’s website suggests that they’ve yet to create a show that has similar aesthetics to anything within the current Miku canon, and Carlin West is… well, it’s an American content agency, and we all know what that means.