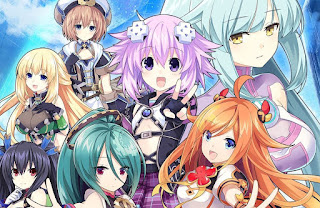 Idea Factory has unveiled the release date for its upcoming action JRPG Neptunia Virtual Stars. The game lands in North America on March 2 and Europe on March 5 for PlayStation 4, and a further Steam release will occur on March 29.

Neptunia Virtual Stars is a play on the whole virtual idol sensation that is taking YouTube and other platforms by storm. It even features actual stars from the likes of Hololive, Game Club Project, and so on. This is an interesting game in a number of ways, but most significantly it will be the first Neptunia game that won’t feature any art by Tsunako, the visual artist behind the iconic design of Neptune and her girls.

The action itself will be a blend of third-person shooter and hack-n-slash. Neptunia and her goddess pals will be doing the shooting, while the virtual idols will get close and personal with the enemy. If Idea Factory has done this well it could result in some dynamic, fluid gameplay indeed.

Either way, we won’t have to wait long for it! The first half of 2021 is rapidly filling up with all kinds of niche JRPGs. We love seeing it.