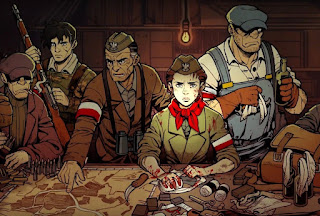 In Warsaw, players take the role of the Polish resistance against the occupying Nazi forces towards the end of World War 2. It’s a tactical role-playing game which is heavily weighted towards combat and resource management. Developers Pixelated Milk set out to make a harrowing game in the vein of Darkest Dungeon, where players are pitted against a monumental challenge and stacked odds, so that only the most cunning strategists have any chance of success. But overall, its repetitive gameplay does not build towards a convincing emotional core, which limits the effectiveness of the experience.

Warsaw’s gameplay is familiar, and although it does introduce its own complexities and unique mechanics, those who have a few tactical role-playing games under their belt will feel right at home within this game’s systems. Combat is done on an 8×2 grid, where the left four columns are player territory, and the right 4 are enemy lines. The player and the CPU opponent take turns to pick a character and perform one of up to four skills, ranging from the standard attacks, area-of-effect moves, buffs and debuffs. The twist which Warsaw incorporates is ammo management: each action will cost a form of ammunition, which is a resource found from exploration or winning combat. Reckless play will result in shortages, preventing the player from using their units to their best ability.

To the developers’ credit, Warsaw’s combat system is neither shallow nor bloated. Following the Darkest Dungeon school of unsatisfying but meaningful turn-based-combat, Warsaw’s battle actions are almost always challenging trade-offs between making aggressive manoeuvres and putting your vulnerable units at risk. There’s an interesting stamina system which deepens the strategic decision making; players can use one character’s abilities multiple times in one round, at the cost of accuracy. Since each character is going to have very specific skills that are useful in some situations and sub-optimal in others, combat is always an interesting matrix of trade-offs rather than mindless auto-pressing of an attack button. That being said, combat is often quick and intuitive; skills are simple in their intention, and animations play out quickly too. It does still have the brutal difficulty which will result in characters dying, sometimes due to critical hits or misses that were entirely out of your control, but these situations just force players to have contingencies and ultimately serve to communicate the game’s tone. 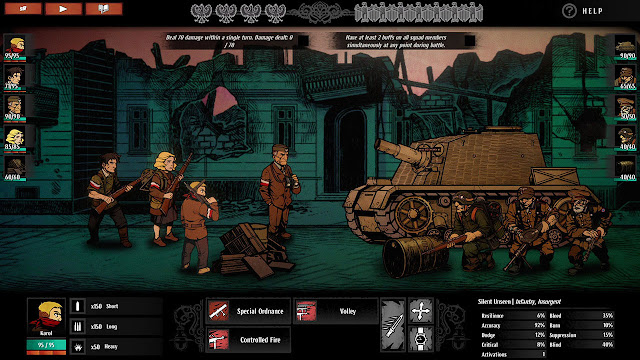 Surrounding the combat is an overarching mission system chronicling the quest of the game’s heroes to fully incite a people’s rebellion against the occupying Nazis. Warsaw is a rogue-lite in that missions, characters and situations are all randomly generated, so that no two playthroughs are exactly alike. While this is great for replay value, it does significantly cheapen the storytelling: character backstories feel simple because there are just so many of them, and there are rarely any plot twists or painful choices which stayed with me throughout my playthrough. In the moment, the game is great at communicating tone and mood, but the mission system with all its random tasks definitely struggles to represent the lasting scope of the conflict, or the human cost.

The art style is perhaps the most memorable part of Warsaw’s design, and it’s what first drew my interest to this game. The bold outlines, dark shadows and emphasis on expressive keyframes will surely draw comparisons to Darkest Dungeon, but Warsaw’s WW2 setting does offer some uniqueness. The character art communicates personality even where the written text has trouble keeping up, and when the player does form that sense of attachment to their named heroes, that’s when the premise of Warsaw is working best.

The Switch port is a lot weaker than what the experience might look like on PC. This is very clearly a game designed for mouse and keyboard; navigating the icons of combat with the thumbstick and face buttons is a real chore. It’s hard to get the exact information you’re interested in, so in the early learning stages of this game I spent my time making all the wrong choices and not fully understanding exactly why each skill functioned the way it did. Much worse though is the font size – there’s no way to change it, and it’s so small that playing in handheld mode is near impossible. Even in docked, players will need to sit right up to their TV to avoid the strain. It looks like the font size hasn’t been rescaled at all from the PC version, and that means there’s chunks of empty space surrounding the tiny words. 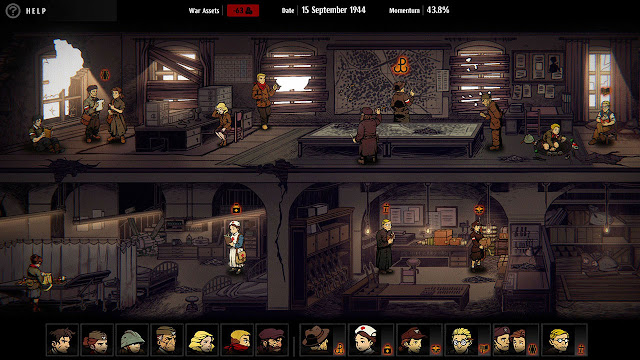 Warsaw is derivative and it has a lot of small technical issues on the Switch, but ultimately there are larger structural issues which hold it back from greatness. And I hate to say it, but it’s absolutely apt here: Warsaw suffers from ludonarrative dissonance. The narrative of the game is about attrition; at the beginning of each day the player is confronted with the status of the city, the falling morale of each of the districts, and the dwindling population count at the hands of the invading Axis powers. The narrative wants players to take this historical setting seriously. But the combat system, with all its Darkest Dungeon and turn-based RPG influences, wholly gamifies the World War 2 setting in a way that cheapens the emotional impact. Many design choices are questionable in that they negatively affect the game’s sombre tone.

Take, for example, the challenges in every individual combat encounter. The player will be given two arbitrary tasks, such as defeating multiple enemies with one skill, or limiting ammo consumption of a certain type. Successful completion of a task during combat rewards player characters with bonus EXP, which is crucial on the harder difficulties if heroes are to scale with the surmounting threat of the enemy forces. The problem is that these tasks are trivial and make no sense from a narrative standpoint. They incentivise guiding the characters to do silly things, like not use their best skills, or inefficiently kill their adversaries with convoluted abilities, for a statistic which determines their characters’ avatar strength.

This is just one of the many ways in which combat constantly forces players to undermine the game’s own narrative strengths. Player characters have a variety of skills available to them with different coverages and effective ranges, but these are hardly analogous to any real-world combat situations. I found myself consistently bewildered at revolvers that could only damage the backline, rocket launchers which hit one target and one target only, and sniper rifles which could only affect “frontline” enemies (a category determined by the game’s rules, and not enemies actually positioned towards the front). 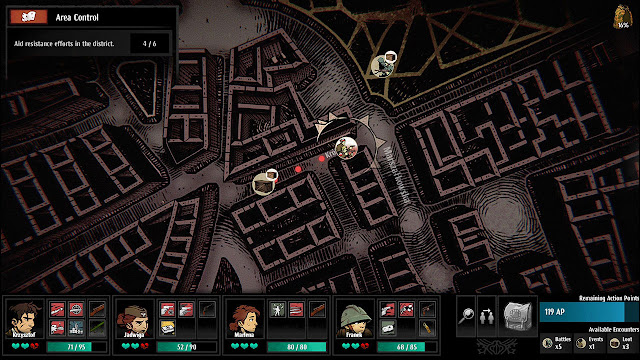 These choices all make sense from a game balance perspective, it means that no character is a jack-of-all-trades and combat always feels like picking the least-bad option in a myriad of tough choices. But it’s hard to properly meditate on the horrors of war when being hit by an Axis flamethrower only means reduced accuracy and intermittent damage over time. It’s just a sub-par way to represent a real period of human history, and I wish that the developers had either put in more foresight into what their game mechanics communicated, or conceded to using a setting outside the boundaries of reality. As it is, Warsaw occupies a muddy middle-ground between the brutal and completely un-fun scenarios of This War of Mine, and the engaging but completely fantastical realms in Darkest Dungeon. It never properly reconciles its conflicting intentions to offer tactical, empowering combat with a gritty, real-world story.

Warsaw is an interesting concept which does do quite a few things right, but its inconsistency of vision prevents it from achieving the same greatness as the games it was clearly inspired by. Pixelated Milk are at their best when they are holding players in the desperate struggle for survival, where each tactical decision matters a great deal between life and death. But it takes real concentration on the player’s part to make these systems work, compounded by UI issues on the Switch which only further exhaust players. There are plenty of games which set out to do things similar to what Warsaw does, but more effectively.