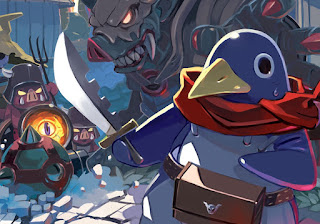 Review by Matt S.
The two Prinny titles – Can I Really Be The Hero? and Dawn of Operation Panties, Dood! are some of the most oddball titles that Nippon Ichi has created. Taking the common peon and mascot of the Disgaea tactical JRPG series, and throwing them by the thousands into hardcore difficulty platformers, always struck me as a side-step for the franchise that no one actually asked for and made little sense for building the overall property. And indeed these games have become hyper-niche things and the dictionary definition of cult classics in the years since. Now, though, NISA has dusted them off for a dual-pack re-release on Nintendo Switch, giving them a second chance at discovery. They’re good – very, very good – but as to whether they’ll turn heads, though… I’m not so sure about that.

Fundamentally, Prinny 1 & 2 are well made (and they’re almost exactly the same as one another, so I’ll be referring to them both together throughout this review). They’re infamous for being the difficult to the extreme, where you’ll have 1,000 lives… and quite possibly need to use all of them to get to the end, but that difficulty in itself isn’t a marker of quality. A lot of very difficult games are terrible. What makes the two Prinny titles quality is the fact that the levels are carefully designed to be extreme without making you want to scream in frustration either. A generous checkpointing system ensures that the most difficult bits can be tried over and over again without too much fuss, and while that 1,000 number haemorrhages rapidly, there’s an almost cathartic gameplay loop in just how quickly you do make progress. Every metaphoric wall of difficulty you hit is eventually clambered over thanks to a pile of dead Prinnies at its base, and after spending an hour or two stuck on a section, on finally clearing it you realise “hey, this level isn’t so long,” and you’re ready to move on to the next one. Therein lies a core difference between the Prinny titles and older “hardcore” platformers – the latter throw “Game Overs” at you with glee. The Prinny games have figured out a system for making extreme challenge both fair (in that most people will be able to eventually push through the hardest bits and finish the game) and entertaining.

And they are very entertaining games – this point does need to be emphasised. The Disgaea series has always been about a combination of self-aware humour with a healthy love of puns and the weird thrown in, and that’s certainly the case with these two titles. There isn’t much by way of plot, but the dopey way that the Prinnies wander around (and frequently die) is funny all into itself, and then before and after boss battles there are some interactions between the Prinny and the boss that can be… eye-opening, to put it mildly. One of the best motivating factors for pushing through the difficulty walls is the opportunity to see just what is lying behind the boss battle door. It’s never what you’d expect. Between levels there’s a tiny little hub with a few characters to talk to and here, too, the games get their chance to indulge the very distinct wordplay of the Disgaea series. 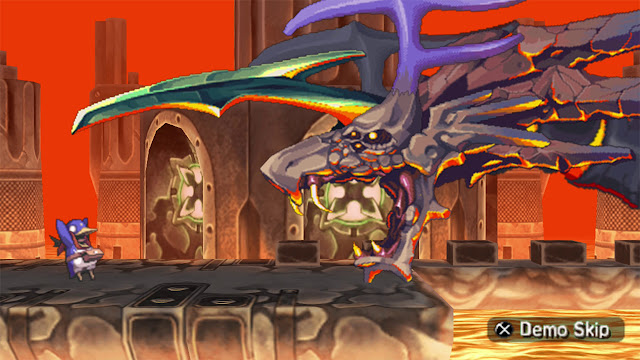 As platformers, both Prinny titles are perfectly functional, featuring all the movesets that you’d expect from a modern platformer (including a lampoon of Yoshi’s favourite butt dive attack), as well as some variety thrown in when you can jump into vehicles for some mechanical mayhem. I have one very big issue with the action, as the Prinny isn’t mobile enough in the air and that inability to adjust course is going to cause unnecessary deaths that have nothing to do with a genuine kind of challenge. That jumping mechanic is simply poor design and it makes the more mobile enemies much cheaper and nastier than they need to be, since it’s that much harder to avoid their attacks or counter with your own.

Another thing that lets both titles down is the pedestrian design of the levels themselves, which, set against the vivid creativity that we see elsewhere, does come across as a missed opportunity. The issue is that the levels are all designed as a linear gauntlet on the way to the end boss, with little to encourage exploration and few joys in terms of secrets to reward creative play. I’m no fan of the “collectathon” platformer, but in comparison to, say, the better Mario platformers, filled as they are with nooks, crannies and shortcuts, there’s nothing that makes you feel like you’re playing particularly cleverly in the Prinny titles, until you’ve defeated the end boss and had your performance in the level graded. Getting an “S” rank there is a special feeling, but the journey to the end is a dredge at times. I would have preferred some immediate satisfaction, such as the ability to work out how to bypass a tricky section entirely, or the rare treasure trove to reward me for taking a leap of faith. Prinny is more inspired by something like Adventure Island/Wonder Boy – it’s largely on-rails in a single direction from start to finish. Now, Adventure Island is plenty of fun, and so too is Prinny, but they’re not going to be remembered as masterpieces of level design, either.

As ports, Prinny 1 & 2 are a little underdone. Given that the base games were designed for PSP, blown up on the higher resolution Nintendo Switch screen (let alone the TV) does make the characters lo-fi, and not in a pleasant way. Backgrounds and environments, meanwhile, are functional and do set a scene, but these games weren’t known for their visual spectacle even on the PSP. Not much has been done to “remake” either title for the console, which is both understandable (given the scope of work that would have been required for a full remake) and also disappointing, because there are a lot of platformers on the Nintendo Switch and NISA’s not doing Prinny any favours by ensuring the screenshots will all look so pedestrian. 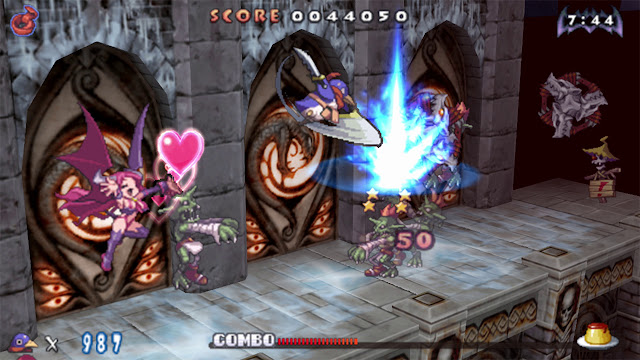 Like any true cult classic, however, people swear by the quality of Prinny 1 & 2, and they do so for a couple of reasons; the difficulty, of course, and the humour. Those are the two main reasons, but there are all kinds of smaller qualities that show the developers had an eye for detail in the right pacing. For one, there’s also plenty of wild variety in enemies and the bosses, though they have simple attack patterns, are memorable foes. Additionally, the general flow of the action shouldn’t be underestimated as a feature. In fact, it almost helps to remember Prinny less of a platformer and more of a vertical shooter, a-la R-Type. The design and flow of the game is more akin to that genre, even if, superficially, you’re on foot and in theory have broader directional control than in the typical shooter.

Prinny 1 & 2 will endure on and be remembered, if only because they have that infamous challenge level and the highly amusing approach the developers took to address that. Who doesn’t want to throw a thousand-strong horde of Prinnies at a problem? Scratch beneath that surface are two platformers that are more bluster than refinement, relying more on humour than adventurous design to keep players interested, and while there’s nothing wrong with that, it does need to be noted that as far as the platformer genre is concerned, these efforts are neither stand-out nor inspiring. You might not have favourite levels or scenes by the time you’ve ground out victory across these two titles, but as raw entertainment, they really are hard to put down. As a double feature, NISA is providing real value and entertainment, and hopefully plenty of people are willing to tackle the challenge.