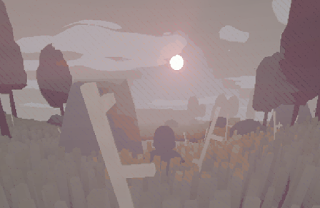 Note: I also haven’t played these games. I highlight them as interesting based on the itch.io description and concept. Where I find the time to do actual reviews or other coverage, I will compose separate articles on the game in question.

We’ll start this week off with a visual novel, and Were|House looks like a wild good time. It’s a short little experience (the game promises “40,000 words” which is the length of a short novel, and I know from creating my own that means about 2-3 hours worth of play), and promises to be a “comedic game with a dash of romance” – what that means is there are there hunky wolf-characters to hook up with by the end. 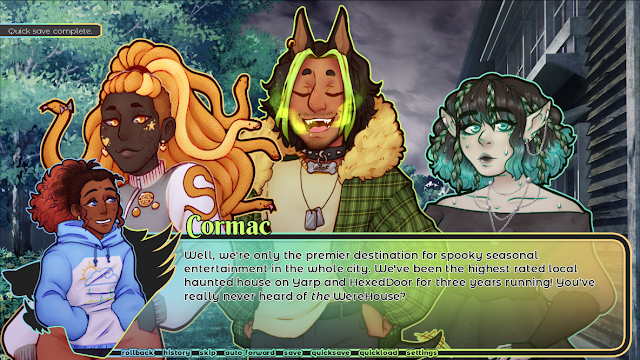 What really caught my attention with this one is the art style. It’s got a strong and distinct visual style that is bold, colourful, and hints at a lot of creative energy. It’s also a pretty firmly LGBTQIA game, with the protagonist being customisable both with name and pronoun and… well, we do need as many of those kinds of games as we can get. This is one of those games that is simply nice to see.
Grey Scout

Next up is a game in a genre that I don’t usually enjoy that much, but this one has a vibe and aesthetic that I really dig. Grey Scout is a “stealth game set on a rainy island.” You need to rescue a bunch of friends who are being guarded by enemies and help them to escape, and you need to do that by… sneaking around. 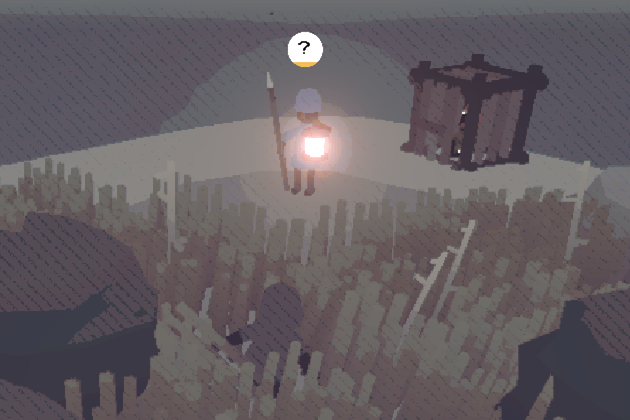 The game’s pretty clearly a prototype, with all of 30 minutes of gameplay promised, but with ten different friends to rescue, there’s enough there to get a feel for the developer’s creative vision. With the lo-fi, “Proteus-like” visual style and quality animation that is procedural in nature, the basis in Grey Scout seems to be there if the developers do decide to expand on it further in the future. And if not… there’s nothing wrong about creative little games. That’s what itch.io is there for, after all.
Mech@mor Showdown
Fear the @! FEAR THE @! I’m sure I’ve mentioned this a few times in the past, but I really, really love the original Rogue and the likes of Nethack, as games that are so primitive visually that they use ASCII characters to represent the in-game characters. They’re so primitive that there’s a real appeal to them in 2020, and that’s what Mech@mor is tapping into in a big way. 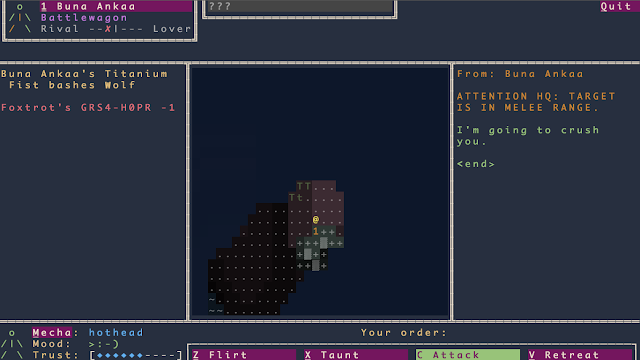 This is an ASCII mecha roguelike, where you play as a hulking metal monstrosity (represented with the almighty “@”), and do all the things you would do in a normal mech game, including fully customising your machine, but with the effects of all your decisions playing out more in your imagination than visually on-screen. Oh, and there is permadeath. Of course there is. It’s awesome to see developers keeping the ASCII game alive and kicking.

Itch.io is one of the few outlets that is totally free when it comes to adult material – it doesn’t discriminate or punish, and while you can block that stuff out it you want to, the platform otherwise doesn’t have any issue with displaying these games alongside the rest of the library. Now, most adult games on itch.io are terrible, but Blood Price… well, it does look pretty nonsense, really. It’s just got a higher standard of visuals than most other adults-only stuff on itch. It’s an RPG Maker RPG – so it should work at least, but has a mechanic whereby your character can have sex with a monster to get an item and, potentially, make them join your party. An eye-opening way to do Pokemon if ever there was one. Blood Price is almost certainly a bad game, don’t get me wrong on this, but it actually has decent quality art, and there’s an outside chance that with the right writing and sense of humour it may just be something great.
That’s it for this week! If there are any new itch.io games that you’d like to bring to my attention, don’t hesitate to drop me a note! I’m very keen on celebrating the creativity and energy of this truly wonderful platform for games-as-art.