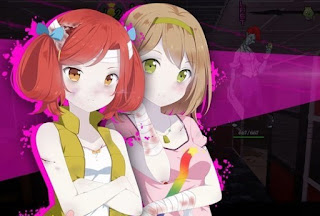 Five years in the making, a failed Kickstarter effort, and lord knows what else in the interim, developer, Nick Doerr, and his team has finally pushed Undead Darlings ~no cure for love~ out the door. If nothing else this game is admirable for the sheer willpower and belief in the creative vision. It’s hard to stubbornly stick to a project when it seems like the universe itself is telling you it won’t work. It’s even harder to back yourself and know that some people will enjoy and appreciate your work when the project just isn’t generating the excitement that you thought it would. I’ve been there myself. It sucks. Thankfully, there’s a lot of merit to Undead Darlings, and it not only deserves to find an audience, I’m also fairly certain that it will do so. It’ll be a small cult following, perhaps, but there’s a lot of creative energy that has been poured into this game, and I think that will rub off on people.

Broadly speaking, I “read” Undead Darlings as a satire of the anime harem genre – the one where one dude ends up with a horde of girls following him around, vying for his attention and love (with him usually being too hopeless to deserve it). In Undead Darlings that dude is a hapless fellow named Reggie P. Happenstahnce (no, really). In a twist, however, all the girls in the dude’s harem are half-zombies (i.e. going to turn full zombie eventually if there’s no cure found), and he’s not the only guy in the crew, and that significantly messes with the dynamic. See, there’s a fellow called Buck that follows Reggie around and… well, Buck’s a lot. Buck’s the guy that says all the quiet things loud. Buck’s the guy that actually wants to… it rhymes with “Buck”… all the girls, and he’s quite open about that. Buck’s an unmitigated boor and I am convinced that he exists exclusively within this game because he absolutely trashes every expectation of the harem genre by dialling it all the way to 11, and then so far beyond that he’s broken the (his) knob.

And so, while Undead Darlings does deliver a lot of what you’d expect from the harem genre (relationship-building moments with each of the girls, heart-to-hearts, and jealousy scenes), it’s always just two or three lines of dialogue away from fourth-wall-breaking cynicism about every one of the tropes it otherwise depicts. As to whether it works… I’m still genuinely not sure, after a couple of dozen hours play. In combination with the visual aesthetics (which we’ll get to shortly), Undead Darlings has a no-nonsense “punk”-like approach to dialogue and narrative. It very much says what it’s thinking, and a lot of that comes across as quite juvenile, laboured writing. This issue is exasperated by the visual novel-like length of the dialogue scenes that can pull you out of dungeon crawling for a half-hour (or longer) at a time, and while I appreciate Hideo Kojima-like digressions from gameplay to deliver narrative majesty, this one’s narrative is most assuredly not as controlled or precise as Kojima’s writing. I did a live stream of my first hour or so of play of the game, and as you’ll see I found myself rather confused about whether I should be laughing with or laughing at the writing. Believe it or not that confusion never actually left me through the game.


With that being said, I did enjoy the characters (aside from Buck), as they had some neat dynamics going on. Around about the three or four-hour mark, you’ll meet the third girl that joins the harem (beyond your two childhood friends), and then the narrative steadily ramps up the range of the eclectic cast. They canvas the full range of anime trope expectations, they banter, but there’s always the sword of Damocles (i.e. zombiedom) hanging over everything they do. It doesn’t affect the girls in any substantial way at the present, but there’s always the risk they’ll turn suddenly, and that’s meant to instil a sense of urgency into the action (even though there are no actual urgency systems within the gameplay).

The various locations that you’ll explore through Undead Darlings are all decrepit (the game is set post-armageddon, after all), but interestingly you don’t actually fight zombies as you explore these locations. Instead, you battle against boldly coloured enemies that I can only describe as “graffiti” or “punk comic” made manifest. I’m not entirely sure what informed this decision, though it does allow for a wide and creative variety of enemies to fight on your quest. There’s even a vaguely Persona-like tone to the aesthetic thanks to the deeply saturated colours, and while I would have rathered there be more consistency between the dungeon environments and that combat aesthetic, I did find both pleasant enough in isolation. I also thought that the special attacks and the general visual dynamics in combat are more understated than what the bold character sprites demanded, but then I do suspect a lot of what went on here occurred through cobbling together what assets were available throughout the development of the game.

Undead Darlings plays the dungeon crawling side quite straight. Almost too much so, given how nutty the narrative is. But it is good, clean ‘crawling fun, with a reasonable encounter rate that neither prevents levelling up not makes exploration a chore. The winding labyrinths that you explore make good use of the grid-like layout to deliver occasionally disorientating sequences of passageways and rooms to explore, and there’s just enough of a puzzle element with switches and locked doors to keep you thinking. The dungeon environments lack the grandiose scope of what we enjoy in an Etrian Odyssey, Mary Skelter, or similarly-intricate mapping experience, but the old-schoolers that grew up with Wizardy and similar will feel right at home. 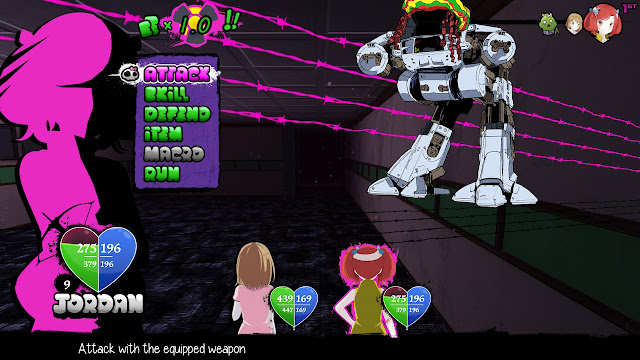 There are a couple of things missing, though. The inability to drop down manual notes for later reference did sometimes mean that I missed a critical section of the dungeon and spent ages wandering around trying to figure it out – the lines that delineate “walls” and “open gaps” in the wall aren’t quite clear enough for my liking, so I’d be glancing at a section of the map and not realise that there’s a critical passageway there that I hadn’t explored yet. The other issue is that there is some needlessly irritating backtracking baked into the experience. You’ll come across several “key moment” heart-to-heart opportunities while exploring the dungeon. They’re worth tracking down and experiencing because they do add to the characterisation of the game, however, if you haven’t recruited the right person in the team to your cause yet, then you’ll need to file that away in the memory and come back at a later date… but exploring old dungeons is tiring thanks to the very particular difficulty curve.

If you’re at a level that is too low for the threats that you’ll come across while exploring – even if it’s just one or two levels – then you’ll be a mess on the floor, quickly. If you’re too high in level then there’s nothing the enemies can do to inflict meaningful damage to your side. As a result, each dungeon level has a small window where the difficulty is set at just the right pitch to balance rewarding challenge and drawn-out, exhausting combat. Additionally, and quite aside to the difficulty, I found the random elements in combat to be against me just frequently enough to add to the perception of a tiring grind. I found it to be (far) too easy for my characters to miss attacks, with far too little available to improve accuracy, making some otherwise easy combats drawn-out unnecessarily, and more difficult battles an absolute pain to navigate.

There’s also a resource management component to Undead Darlings, which is stricter than is perhaps ideal. Weapons degrade with each use, and while there’s a limited capacity to restore those items with the use of a resource (scrap), the game (especially in the scrap-free early stages) forces you to constantly discard items to make way for new weapons. When you also consider that (at first) the party can only carry ten items (and you’ll want back-up weapons for each character), and there’s only limited capacity to store items between delves, it’s easy to see the system as overly punitive, and you’ll be constantly tossing aside items you would rather have otherwise found to be valuable because the inventory is too full up. 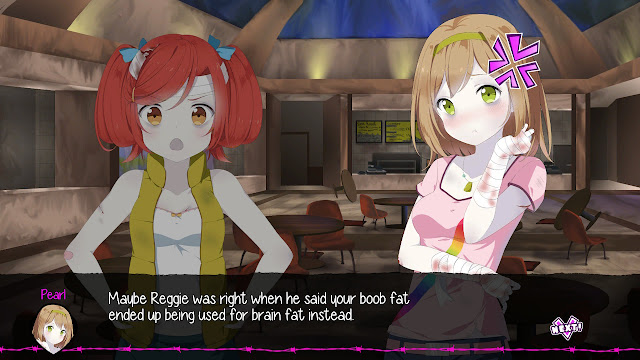 Now with all of that said, there is a lot to like about Undead Darlings’ combat and gameplay, too. Just like a Persona or Shin Megami Tensei, there’s a heavy emphasis on knowing and then exploiting enemy weaknesses, with a multiplier being built up with every successful “weakness” attack landed. That multiplier can then be used to deliver a particularly powerful attack, which is enormously useful when it comes to bosses. Furthermore, it’s only the first time you battle an enemy that you’ll need to figure out their strengths and weaknesses by yourself. After that, the game helpfully conveys that information (along with the enemy HP), and while I know that might make it all seem too easy, in reality, it’s a kindness that means that you can enjoy a tense first battle with each new beastie without then needing to develop your own encyclopedia of strengths and weaknesses to maximise the value of that combo system.

Combat is also nicely strategic, with each girl having substantially different ability sets, but there’s enough cross over that prevents party selection from becoming overly prescriptive. Some of the girls will learn skills in another girl’s area of expertise, meaning that though you can only take three of the entire crew into a dungeon with you, you’re not going to get stuck into situations where only one specific combination of girls will work. This allows you to have your favourites and stick with them throughout the adventure, which lends itself to the dating sim side of the harem homage/satire that the narrative is driving at.

There are little issues that mean that Undead Darlings wears its “indie” spirit on its sleeve. Voice acting is uneven, with different actors sounding like they recorded the lines at different volumes and using different equipment, with no effort to equalise the sound. The characters are attractive and charming but some of the key art lacks for energy, detail, or really in highlighting any particular scene of note. However, all of that is more than forgivable. Undead Darlings comes across as a work of passion and creative energy, and I rarely see a game as inherently enthusiastic as that one. However flawed and rough it is, this is one very admirable little experience.