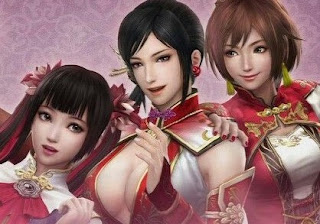 I’ll admit that I didn’t watch much of TGS 2020’s final day – the major announcements and streams had already happened and Bandai Namco, which was the major stream yesterday, was just showing off yet more of Scarlet Nexus; a game I know everything I need to ahead of its launch. Konami had a stream too, but it was for a board game which looks like great fun, but won’t be getting localised any time soon. Koai Tecmo did, however, have a couple of Warriors-flavoured tidbits worth paying attention to.

The big one is Dynasty Warriors 9 Empires, which will be released on PlayStation 5, Xbox Series X, PlayStation 4, Xbox One, Nintendo Switch and PC (Steam). It continues the long tradition of releasing an Empires game between the major new numbered titles, though Dynasty Warriors 9 Empires is interesting in that it doesn’t bring across the major (and controversial) feature of DW9. That game was an open world action game. Empires will not be open world, suggesting that it will play substantially different from the base material.

For those who have never played an Empires game, they’re the “hardcore” sub-series within the Warrriors franchise, as they blend in strategy and simulation elements with the action. As a result, they are perhaps the most spot-on recreations of the original Romance of the Three Kingdoms historical novel of all.

Expect a 2021 release for this one, though aside from it being “early” in the year, we have no firm release date as yet.


The other announcement was Dynasty Warriors for mobile devices (iOS and Android). Now, there was a Dynasty Warriors on mobile previously, but it was developed by Nexon. This one is a Koei internal project, as far as I can tell, and… well, it’s hard to get too enthusiastic for mobile games until you’ve seen how they handle narrative and microtransactions, but I want to believe that this looks good.

Interestingly, the game has been tailored to one hand play, meaning that you can play it in vertical mode on your phone. That’ll be particularly handy if they give Sun Shangxiang a swimwear costume…

… And on that off-colour joke I’ll drop the trailer and be on my way. There’s no news of a western release of this just yet (and Koei is terrible at localising its mobile games), but a closed beta opens up for Japanese players on October 8.