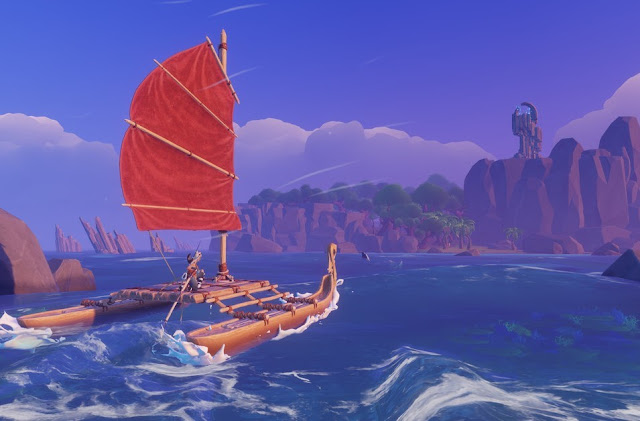 The survival genre is interesting to write about critically, since many design choices which would feel grating or exhausting in any other genre are, instead, the survival game’s calling card. Things like permadeath, repetition, disempowerment, unsatisfying combat, even at times tedium – normally we don’t value these things in games, but each of these things are crucial to making a survival gameplay loop work. And into an already love-it-or-hate-it genre comes Windbound, a game which does successfully hit the right notes to be an effective survival experience, but makes some even more divisive design choices regarding exploration, narrative and world-building. There’s a lot to love about this game, but I’d be hard-pressed to consider much of it particularly satisfying.

The core conceit is that it’s a survival game set on an archipelago of randomly generated islands, with the player building an increasingly seaworthy canoe to traverse larger and more perilous gaps between safe spaces in an effort to survive. It’s a classic human-vs-nature story reminiscent of Robinson Crusoe or Castaway, where the savvy player will do whatever they need to do to survive against the odds. Players fill the shoes of Kara, a white-haired young woman who finds herself traversing a mysterious portal and onto a tiny deserted island. She’ll need to scramble to find food and equipment if she’s to solve the game’s core mystery – a post-apocalyptic story concerning ancient civilisations, monsters, and a hopeful future.

Immediately, the game draws a superficial comparison to the design of more recent Zelda entries like The Wind Waker and Breath of the Wild. Just like the latter, Kara has a health bar and an all-purpose stamina bar. These simple resources serve as the stand in for more complex survival systems in other games; there’s no need to worry about water, health conditions or sickness here. Instead, as long as the player keeps Kara satiated and away from danger, there’s no risk at all of dying. 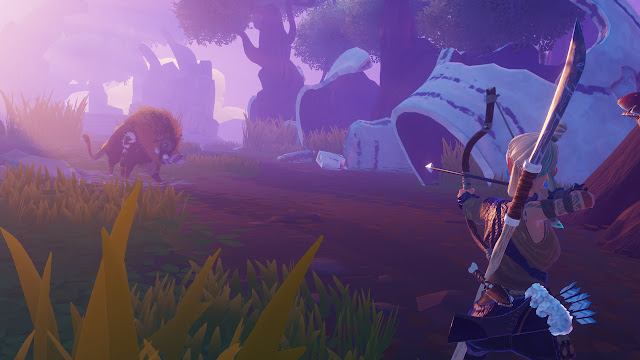 But of course, food is hard to find and danger is ever-present. The first island the player wakes up on will likely have no food at all; the second, maybe a handful of barely-filling berries. The player’s stamina bar doubles as their hunger bar; when Kara’s hungry, she can’t run for as long, and thus survival gets harder and harder. For a sustainable meal, the player will quickly need to craft some hunting implements – either a slingshot or a crude spear – and take down some of the game’s wildlife, cooking the meat on a fire for maximum effect. This is where the game’s combat system comes in; before long you’ll be coming across monsters with enormous health-bars which drop valuable components, and the gameplay loop becomes about gearing up and building strategies to take down these big creatures.

Combat in Windbound is flawed and not entirely responsive, but good enough for the genre’s expectations. The setup is actually quite similar to Breath of the Wild; Kara has access to a melee weapon (usually a spear) and a ranged weapon (a sling or bow), both of which can deteriorate and break with overuse. Enemies often have enormous health bars and are aggressive when provoked; it means that battles are often strategic, drawn-out affairs. Just like in Breath of the Wild, it’s up to the player to take favourable encounters and strike enemies when they’re vulnerable; when they’re distracted, or when they’re asleep. The stamina bar is, from a design standpoint, pretty ingenious.

Kara effectively has a yellow “immediate energy” bar which recharges quickly, and beneath the yellow bar is a “reserve energy” bar which recovers very slowly. It makes the fight-or-flight decision one of strategy: the player must decide if encounters are worth the risk, or if it’s better to just run away and recharge. I particularly respected how the game’s crafting progression was tied to the monsters the player successfully took down. Yes, from a narrative perspective, it’s strange that Kara can only make a hammer out of a stick and a Goreclaw Crest instead of, more resourcefully, any random rock. But this incremental system allows the player’s toolkit to slowly unfold in an interesting way, and provides an impetus to take on the bigger and stronger monsters on subsequent islands. This can be a bit of a double-edged sword though; it means at the beginning of the game the player has barely any access to the fun parts of the game, or the necessary tools to advance (compare this to Breath of the Wild, which gives the players access to every main mechanic in the first hour or so). This makes death extra painful, since players are sent all the way back to the beginning, and they’ll need to grind their way back up the food chain to have a second crack at the beast that did them in. 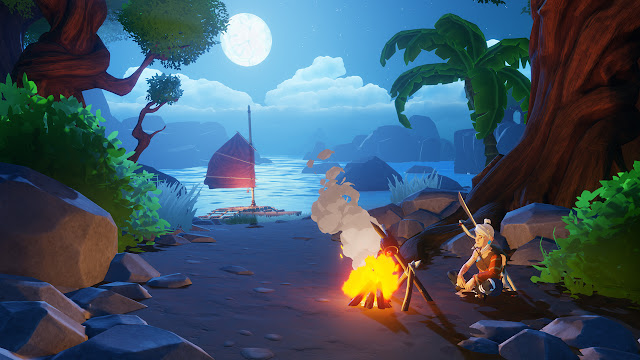 The second major mechanic is sailing, which is genuinely one of the most robust seafaring systems I’ve seen in a game to date. One of the earliest crafting projects the player has to complete is a simple canoe, rowed by a magical oar. Islands will quickly run out of resources, which forces players to keep moving forward – survival necessitates progress, and this is effective in pushing players to find their current chapter’s three towers and advance the plot. Soon enough, the player will be able to craft a sail for their canoe, which greatly speeds up island-to-island travel. Sailing is, at least for the first few trips, a highly enjoyable experience. The game has a wind system which dynamically changes, but there’s a clever way to move forward quickly regardless of how the wind blows. I’ve never been sailing in real life so I can’t say if this is accurate, but players will need to learn how to weave and zig-zag their boat while tightening and loosening their sail to catch the wind and ensure they maintain forward progress.

The overwhelming water in each of the game’s chapters does start to take its toll over time. One of the natural benefits to a survival game largely set on land (the jankier but much more compulsive Radiation Island, also on Switch, comes to mind) is that when the player is walking to their destination, there are always interesting things to see. This isn’t true at all on water; for minutes at a time, the player will be going through the motions, waggling their joystick when necessary and waiting for the next island to appear. The best experiences of Windbound are all had on-land, and for a game with procedural generation, there’s a remarkably short selection of possible environments to meaningfully explore.

It’s a shame because the production values are so high, too. The graphical style is enchanting and just the right amount of detail for the game’s mysterious islands. The game’s water physics in particular are very impressive; I’ve never ridden a wave with such a genuine feeling in a game as I have in Windbound. The soundtrack is also rather excellent, and never grew tiring despite all the sailing and waiting around that I had to do. It’s a shame that the story itself lacks the emotional impact; it’s a necessary consequence of any after-the-end story, but Kara is an incredibly lonely protagonist with no one to talk to, and this also means she doesn’t get to express any personality to keep me interested. 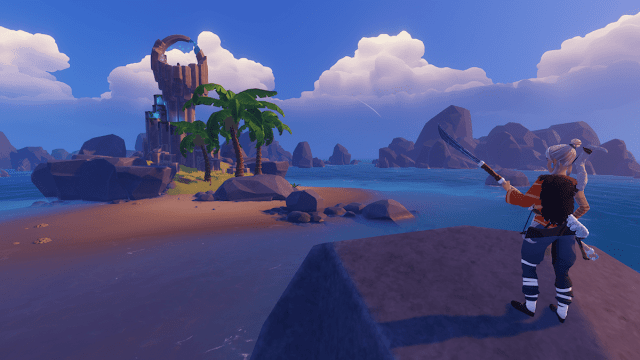 This brings me back to my first point – if you’re a fan of exploration, action or adventure, Windbound is probably going to be a grating, frustrating experience. The narrative tidbits, combat scenarios and even crafting – these are drip-fed across hours of tedious survival gameplay. Sailing takes huge amounts of time, so does waiting for meat to cook or leather to tan, so does waiting for night to fall so you actually have a chance against some of the harder monsters. While Windbound does get much more interesting later into the game, once the player has full access to the arsenal of toys from the crafting menu, this is all lost if the player dies. Survivalist mode is brutal, sending the player back to the first island with no possessions, but even “Story” mode forces the player to lose their boat, which in the late game represents hours of crafting repetition.

This tedium would be unacceptable in an action game, but Windbound is a survival game. In survival games, death is supposed to mean something. Loss of progress represents the stakes; repetition is the barrier of entry. For players ready to take that plunge, there are some far-and-few-between moments of Windbound which are exhilarating. There’s nothing quite like stalking down the player’s first Gorehorn or Gloomharrow and seeing the game’s possibilities open right up as a reward for some intrepid hunting skills. But that being said, it’s a kind of enjoyment which needs to be really scrapped for and earned, and for most people, I suspect Windbound is going to feel a little too much like work.