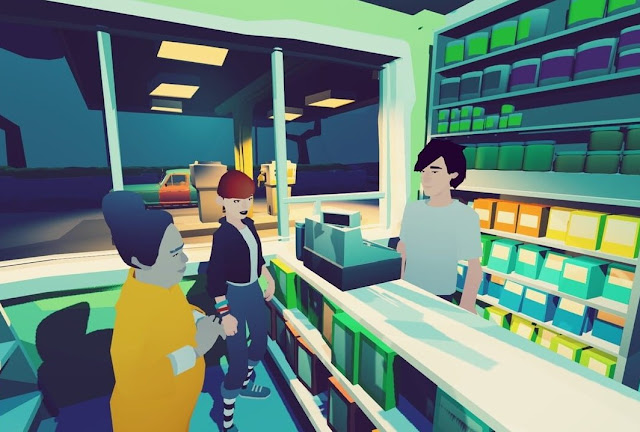 I’m all for cultural games and that means I’ll naturally have a positive slant towards titles like Road to Guangdong. This game, penned by writer Yen Ooi and published by Excalibur Games, sees the player taking the role of Sunny, a recent art graduate in mid-90’s China who inherits a restaurant from her father who recently passed away. This guides her on a road trip with her aunt, Guu Ma, to reconnect with her distant family members, and potentially collect recipes which could revitalise her late father’s waning business.

And, as is all the rage nowadays, Road to Guangdong is a road trip game. The majority of the play time is spent driving from one city to another in the southern half of China, making sure that your rickety old car Sandy doesn’t break down. It’s not an exciting premise – if anything it’s perhaps the most mundane thing I’ve played all year – but it does create opportunities for reflection and quiet, subtle drama.

In each city Sunny visits, the player will be tasked with doing some kind of favour for her relative in order to get a recipe, but also to reforge the familial connection. This plays out in a visual novel format, with order-of-operations puzzles to be solved not unlike a Phoenix Wright game. Sunny decides early on that her goal is to invite the extended family to her place for Chinese New Year (translated as the Spring Festival). In Chinese tradition this is the biggest holiday of the year – people who have been scattered across China’s various provinces come back together for a big reunion, and Sunny’s decision to host for her older relatives is proof of her developing adulthood. 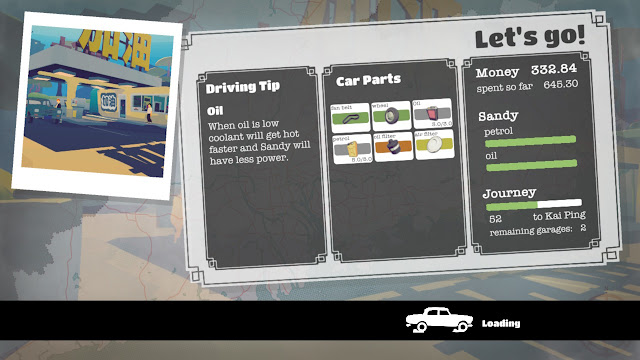 Or, it would be if her relatives could be convinced to actually go back to see the family. See, like most large families, there are ties and connections which strain over time, and it’s entirely possible in Road to Guangdong to widen rifts by saying the wrong thing. The game seems to value the player’s ability to listen, remember and reconcile differences: key themes which resonate with the cultural value of the narrative. By doing this, Road to Guangdong explores the conflict between the old and the new – whether tradition, conservatism and slowness are to be valued, or whether reinvention, creativity and impulsiveness should be chosen instead. But overall, the narrative is about balance, which tends to be the solution to the game’s various vignettes; Sunny learns to consider the benefits and drawbacks of both change and custom.

The mid-90’s setting works well functionally for a game like Road to Guangdong because without the conveniences of the Internet or cellphones in the mainstream, face-to-face communication is the best way for estranged relatives to reconnect. There is a great value in seeing Sunny physically visiting each relative, being in their home, and seeing how the geography of their city influences their outlook. Throughout the course of the game, you’ll visit both rural towns and sprawling metropolises, and this serves to reinforce the conflicts of old and new.

The graphical design here really shines, where the architecture and overall look of each city goes a great length to sell the sensation of place. In both the driving and visual novel segments, the simple geometric art style evokes feeling in addition to texture. Many moments made me nostalgic for the adventures I’d had in my childhood – even if it’s just the outline of mountains looming in the distance within the grey haze. There’s a marked honesty to these representations which gives the overall experience weight. 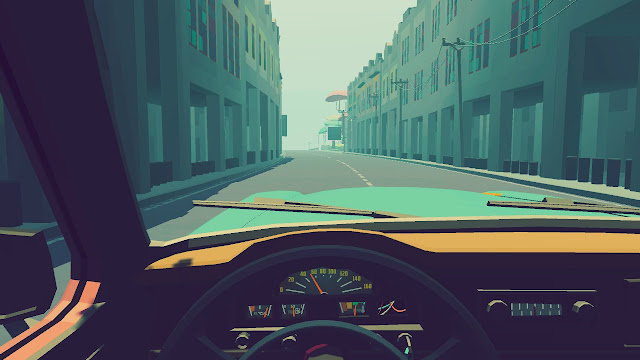 I liked this aspect more than the narrative segments themselves – although they are universally well written, I felt that the game itself was too short to cover the scope of the familial drama that Sunny and Guu Ma experience. There are fantastic moments here and there, but the solutions to entrenched problems seem to appear instantaneously, and it’s almost always Sunny/the player who has some insight that the characters never seemed to consider before the restaurant refurbishment squad arrived. Players get the warm fuzzy feeling of reconciling differences, but I feel that there is a lacking emotional significance to some of them simply because of how easy the solutions are.

I also felt that the driving segments could have been spiced up with some more dialogue between Sunny and Guu Ma. The stretches of road are long, but Guu Ma rarely has anything to say beyond reminding the player that they’re running out of fuel. I did spend half my driving time nervously looking at the dials on my dashboard, making sure my gas, my oil or my check engine light wasn’t coming on. The driving itself is a fairly uninteresting mechanic – it’s something to do in between visual novel segments, and it’s not particularly challenging.

What I did like was the implementation of the radio stations – there are two channels, one which plays traditional Chinese music and another which plays modern electronic and rock. This decision perfectly resonates with the game’s core conflicts between the old and the new, and I found that the choice of radio channel hugely impacted the way I interpreted the game. Traditional Chinese music was a meditative soundtrack which helped me enjoy the long, slow stretches of driving. Meanwhile, the electronic station made me feel like I was on a purposeful journey, and I couldn’t wait to arrive at the destination to rush into more productive tasks. I love that the developers effectively used music as a metaphor to reinforce the game’s themes, and it’s one of the many ways in which Road to Guangdong provokes thought in the player outside of the events which unfold in the game itself. 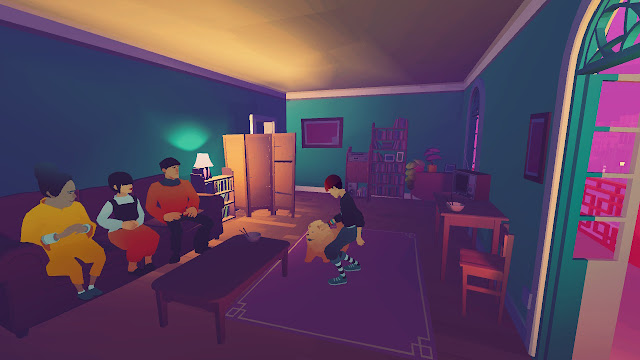 The last aspect of the gameplay I have to mention is the actual car maintenance side of things, which I can rationalise but also found quite tedious. Sandy is an old car – just about every part of it needs constant repair, and at the start of the game it’s barely ready to take a cross-country journey of China. As you drive, you’ll need to stop at plenty of petrol stations not just to keep your tank filled up, but also to fix any car parts which have failed.

Money is the only resource in Road to Guangdong, and it’s what challenges the player to drive Sandy in an optimal way rather than slamming on the accelerator. Money is earned either by completing visual novel segments, as a reward, or by selling car parts you find at scrap heaps along the way. My suggestion for newer players is to take every “engine” part from scrap heaps and ignore the rest; engines sell for 100RMB or more depending on their condition, which will be more than enough to keep Sandy filled up.

The car’s coolant system also starts playing up if the engine is revved too much, which means you’ll be doing most of your journey at a modest 70km/h max. Journeys between the game’s cities will take a few minutes of real-world time, so unless you’re in the mood to enjoy the scenery there’s not much else to keep the player occupied. I can see that perhaps this empty time is there to evoke patience, or to give space for the player to meditate on the story beats they’ve experienced in the previous visual-novel segment. And I appreciate that – I’m a person who does go on the odd aimless drive to get my thoughts in order – but I’m not sure how well this conveys to a player with a shorter attention span. 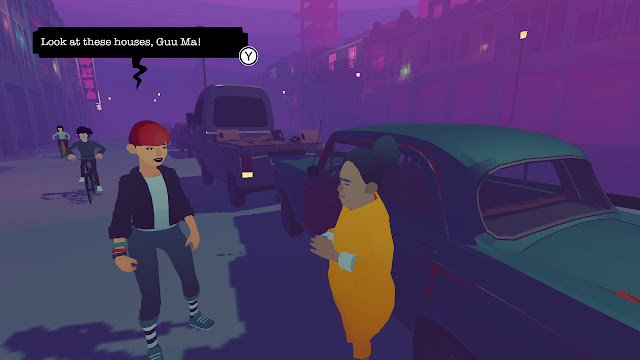 There is a possible game over state for when Sandy breaks down or runs out of fuel and the player doesn’t have enough money to call for a tow truck. Metaphorically, I understand as Sunny not properly learning patience or forethought, so it’s a game over from hubris. But for the player, it’s also a game over which punishes thoughtless play, and not engaging with the slightly tedious mechanics of car repair and maintenance. It’s interesting that the game demands this from the player, or that it even has a lose-state at all. But following my advice on selling scrap engine parts, this will never be a real concern.

Ultimately, Road to Guangdong is an inconsistent game, but its heart shines through its writing and visual design. It does feel like a personal story and I do respect how the game so honestly captures the values and emotions behind family reunions in Chinese culture. I wonder what more budget could have meant though – whether it is more dialogue to flesh out Guu Ma or to background the long stretches of driving – but what is here is already valuable, and I’m glad I got to spend time in this loving recreation of 90’s China.

Developer Q & A: On the making of Monstrum