Death End re;Quest was one of my favourite releases last year. Idea Factory managed to take its typically ridiculous fan service and apply it to something that was in every other way a tense thriller… and against all odds that truly oddball pairing worked. It really worked, and in so many ways it is the most mature (as in, made in a careful and considered manner) that we’ve seen from the developer/publisher to date. Death End re;Quest 2 is a follow-up that has come a little too quickly, I feel. The ideas that the first explored surely took more than a year to percolate, and you do get the sense that the sequel was hurried out to capitalise on the appeal of the original rather than iterate on it productively. Nevertheless, it’s still a highlight of the year.

Death End re;Quest 2 follows the character of Mai Toyama, as she orphans herself (by way of murder) and ends up sent to an all-girls orphanage located in a small, gothic-themed European village called Le Choara. This is fortuitous for Mai, since this was the last known location of her little sister before she went missing some time ago, and even though no one in town (or the orphanage) remembers her, Mai reckons she’s making progress in finding her by landing here. The problem is that while La Choara seems quaint enough by day, at night it becomes a nightmare realm of monsters, bloodletting and (apparently) weird religious cults, so Mai’s initial enthusiasm quickly becomes a desperate effort to solve a pile of mysteries and not get herself killed in the process.

What is really interesting about re;Quest 2 is that it’s not immediately evident that it’s related to its predecessor. That original game told a story of the blurring of boundaries between reality and digital realms; a darker, more twisted Sword Art Online of sorts, or a thriller of the tone of a 1Q84 or the third Ring novel, Loop (yes, that Ring series. That novels take a wild turn from Japanese girls jumping out of televisions to science fiction thrillers musing on questions like “what if we were the Sims?”). It was immediately fascinating to me as someone deeply interested in exploring that increasingly flimsy boundary, so I was surprised (and a little put off) that Death End re;Quest 2 doesn’t start on a similar note. Rather we’re treated to girls dressed in gothic Lolita costumes running around cobblestone streets. It’s more Dracula’s anime harem than Murakami. 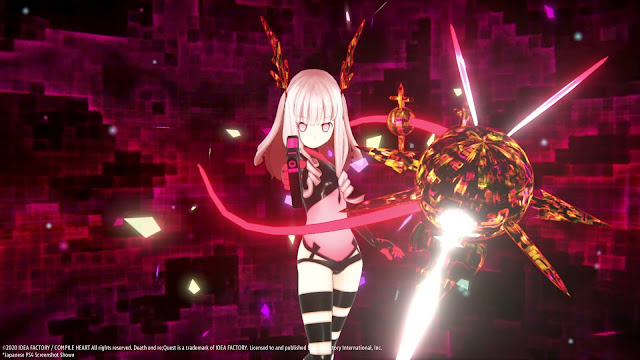 That’s only at first, though, and a couple of chapters later the game starts showing its true teeth and tone. Unfortunately, there’s just too much to Death End re;Quest that is best experienced for yourself, and while spoilers don’t generally concern me, in this particular instance I don’t want to delve into the direction that the plot goes as it is integral to the theme and impact of the narrative, so I’m not going to discuss its mysteries any further at this point in time. Rest assured, though, that it is very much in the vein of its predecessor, and quite cleverly written to keep the mystery and revelations fresh right throughout.

The game does pull together some exquisite horror themes, however. The bloodletting is an obvious one, and frankly, the extreme violence-as-inherent-horror is a bit rote at this point for video games. However, Death End also has a surprisingly strong feminist theme, which is much more interesting. It’s a stalker horror, in that every so often as you explore around the world, you’ll bump into terrors that will chase you around and are… not good if they catch you. Much has been written about the role of the masculine “stalker” role in horror and its socio-cultural implications. Coupled with the game’s other themes – the motif of the all-girls dormitory, and of solidarity between women and unease about men (unease that goes some extreme places – for example Mai is introduced as slaughtering her abusive father in the game’s opening minutes), Death End re;Quest is in many ways a more blunt statement of what many of Idea Factory’s games generally feature, and are too-often overlooked for. Generally speaking, people see the fan service and assume anything but feminism with this developer, but usually (if not always) the women of this company’s JRPGs are the empowered and moral heroes. Even when they do horrible things (such as in Mai’s introduction), it’s both justified and righteous.

The struggle with Death End re;Quest 2 is to appreciate the full extent of the horror present through its themes, as you do need to work the imagination a little. Aside from the gore and creepy level design, re;Quest 2 looks very much in the vein of Idea Factory projects, and the cute characters, upskirting, simple monster design, and sense of humour can break the rest of the game’s tone at times. The first game did a better job of drawing a line between the stuff that’s meant to royally creep you out and the bits where you can laugh along with, but it’s a minor issue here, and for the most part, the game does an excellent job of setting tone and atmosphere. 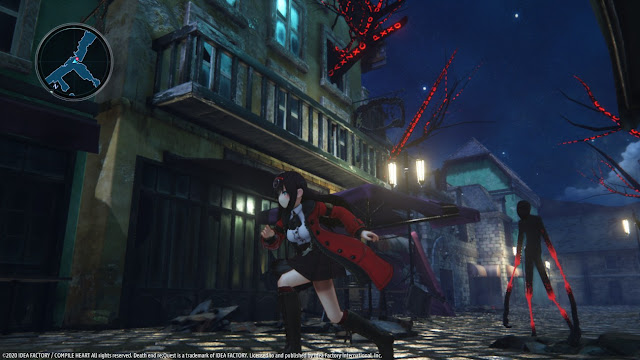 The combat system returns from the first Death End re;Quest, and it’s a good one, meshing together billiards physics and turn-based action. On each girl’s turn, she can undertake a couple of actions, with the final attack in a pattern sending the enemy sliding across the arena. If that enemy bumps into other enemies they will ricochet off one another, taking additional damage in the process. If they bump into a hero she will land a particularly powerful attack on them, sending them flying all over again. It’s this mechanic that you’ll need to master to breeze through Death End, as it’s in bouncing and tossing enemies around that they’ll take the most damage on any single turn. Do enough to “overkill” them and you’ll get an experience point boost at the end of the battle. Play this system well enough and through most of the game you’ll stay well ahead of the enemy difficulty curve, and Death End re;Quest is never overly challenging as a result. But it is an engaging, dynamic combat system and every pattern of enemies that you face down is an opportunity to let loose on a bit of mayhem.

Those “dungeon” delves occur at night. During the day, Death End re;Quest 2 gives Mai the opportunity to wander around the dorm and town and chat with her various dorm-mates and other characters in a visual novel-like structure. It’s important to participate in this side of the game, as it generates plenty of insights into the pervading mysteries (and the broad range of characters and side-stories are hugely engaging), but it’s also the one area where the game’s constrained budget lets it down. Each of the main characters – Mai and her party mates, as well as a few obviously major NPC characters – have full, gorgeous sprites that pop up on the screen. The majority of characters, however, are merely represented by a small portrait in the corner of the dialogue box. It’s not a surprise that Idea Factory went this route – there are a lot of characters and making full sprites for the lot of them would have been obscenely expensive, but it does betray the game a little if for no other reason than it highlights which characters you really want to pay attention to before the narrative is ready to reveal the full extent of their roles in events.

Still, while Death End re;Quest 2 didn’t have quite the same impact on me as the original, that’s only because things are never as surprising the second time around. I still found this game to be an intensely engaging blend of a brutal kind of horror, classical turn-based JRPG, and fan service. It’s a mix that I would never have thought could work prior to this series, but Idea Factory has proven otherwise, and done so incredibly effectively. I wish I could delve more deeply into the themes in this review, because there’s a lot to talk about with this particular dark mystery and I’m looking forward to discussing it at greater length with people down the track, but just be aware going in that there are layers of nuance to this game that it will never get the credit it deserves for.

Death End re;Quest 2: Why I love this game