The next Studio Élan title has been announced

Studio Élan, the developer behind several wonderful visual novels including Highway Blossons and Heart of the Woods, has announced (alongside publisher Sekai Project) that its next game will be Please Be Happy. Another visual novel, it will be released for PC (via Steam) and Nintendo Switch. Here’s the announcement trailer:

Please Be Happy follows Miho, who was born as a fox in a Korean forest. She often remembers a traveler who showed her kindness. Now, Miho has become more human that fox, and decides to seek out this special person. So she makes a trip to New Zealand Skyport.

Miho has spend years observing humans, but when it comes to being one she needs a bit of help. She gets by being a thief, her heightened senses helping her take advantage of others. Luckily, she soon meets Juliet and Aspen. Juliet is a small library owner; Aspen wants to be a novelist. It is through these two that Miho learns about human kindness. But I’m left wondering… what about that mysterious traveler?

Death Come True is set to launch on Steam

Originally launched for Nintendo Switch, iOS, and Android devices late last month, Death Come True is ready to make the jump to PC. The interactive movie will be available via Steam on July 17. A PlayStation 4 version is still in the works, but also still has no release date attached. 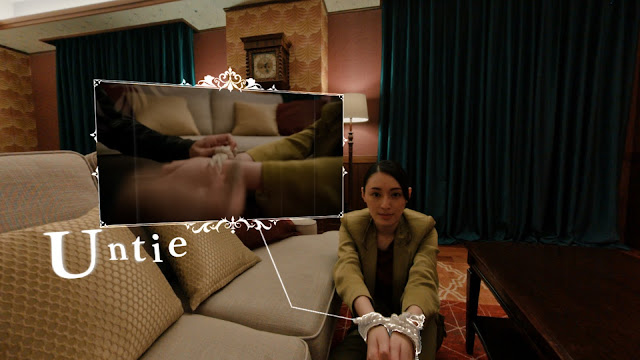 Death Come True is the newest game from Danganronpa creator Kazutaka Kodaka, which makes it immediately obvious the game will be high-quality. As you can see in DDnet’s review by Matt S., that assumption is completely true – he rated it 4.5/5 stars! A man wakes up in a hotel room to the shrill sounds of the phone ringing. It’s the concierge, telling him to visit the front desk if he has any trouble. There is definitely trouble afoot: the man doesn’t remember why he’s in the hotel… or anything else, for that matter. He quickly notices a woman, bound and unconscious, in the room. He also notices the evening news, flashing his own image as an alleged serial killer. Trouble afoot, indeed.

The game is made will full-motion video (FMV), so it’s essentially an interactive film where the player’s choices determine the plot. It takes about as long as a full-length movie for a playthrough, but there are medals to collect if you play repeatedly and die in many difference ways. The game/film is controlled by swiping around to look, and tapping to make a selection. The mystery man will act out the choices.

The World Ends With You anime set to air in 2021

During a special panel revolving around the anime, Square Enix announced that The World Ends With You The Animation (what a mouthful!) will begin airing sometime in 2021. It also released a teaser trailer, so take a peek:

The World Ends With You is a video game from Square Enix, from some of the same people that created Final Fantasy and Kingdom Hearts. The game originally launched on Nintendo DS in 2007, followed by releases on Android, iOS, and yes, even Nintendo Switch (Harvard’s review can be read here). Some of the original team members have returned to help give the story new life via animation.

There seems to be a theme in today’s catch-up: here’s another narrative about a young man who awakens in a strange spot with no memory of getting there. At least he remembers who he is, though. Neko wakes up in the middle of Shibuya’s Scramble Crossing, in an alternate plane of existence called the Underground. He’s become a participant in the Reapers’ Game, partnered with a girl named Shiki. They’ll complete missions, defeat monsters, and uncover the truth behind the twisted game.

Following a bit of a delay, Wales Interactive’s Maid of Sker will be released on July 28 for PC (via Steam), PlayStation 4, and Xbox One. The first-person survival horror title will also launch for Nintendo Switch, although that won’t happen for several months and there is no firm release date announced. Here’s the new trailer released to celebrate the launch date:

Maid of Sker is quite different than a lot of survival horror games out there. For one, it is steeped in Welsh folklore, bringing the player back to macabre Hotel Sker in 1898. The narrative is based on the story of Elisabeth Williams, a woman who died of heartbreak after her father locked her in her room. The story revolves around the William family, as well as a supernatural mystery affecting the hotel.

The key to survival here isn’t simply beating the snot out of whatever jumps out at you: the most important thing is actually the 3D sound-based AI system that alerts the player to where enemies may lie, and they can be avoided. This is all against the backdrop of some absolutely haunting reimagining of various Welsh hymns. Check out the above trailer to hear what I’m describing. It will give you chills.