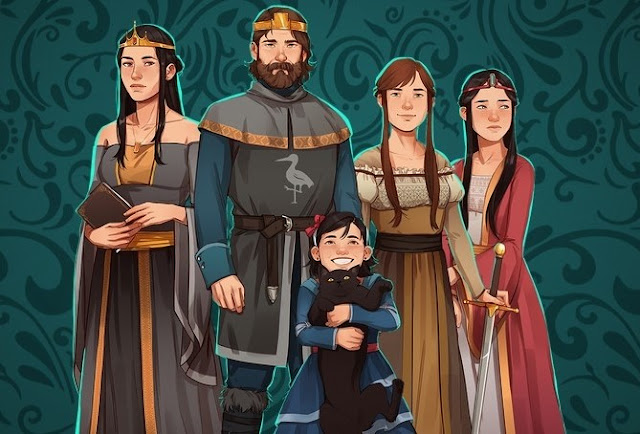 The games industry has really mastered the art of taking another person’s great idea, shining it up with a bit of polish, and throwing it out as something new. Yes, Your Grace is just Reigns, but with a broader and more traditional game-like presentation. In other words, where Reigns took the Tinder-like “swipe left or right” as the entirety of its experience, Yes, Your Grace instead opts for a point-and-click adventure game aesthetic and structure. It’s a fine game, because Reigns is a fine game, but Yes, Your Grace is far too derivative to make it anything essential.

The core concept of these kinds of games is there are never enough resources to go around and do everything that you need to succeed. As a result, everything’s a constant process of trade-offs: Yes, Your Grace, asks you to constantly ask yourself what you should go without. You play as the ruler of a beleaguered kingdom, facing the impending invasion of a horde of barbarians, and barely able to keep its citizens dry as there’s just not enough money to fix the roofs of people’s houses. Despite the fact that you’re near broke and your army badly unprepared for a couple of bandits let alone an army, every day you need to face down a line of petitioners and try to solve as many problems as possible to keep the population just happy enough that they’ll tolerate you. It’s a constant balancing act and some of the decisions that you’ll need to make are anything but straightforward.

What’s more, the king has three daughters, and they’ve all got their own little dramas to deal with, to say nothing of his long-suffering wife. The adventure game elements cut in in-between dealing with petitioners where the king can wander around his fief, talking to people and undertaking a range of different tasks related to the health of the kingdom. For example, at one stage he needs to uncover evidence that will assist with a major trial. These moments are where Yes, Your Grace does try to distinguish itself from Reigns, by giving you a broader and more natural sense of character, setting, and linear narrative. At times, it does work. The writing is generally strong when the game’s aiming to be light and humorous. 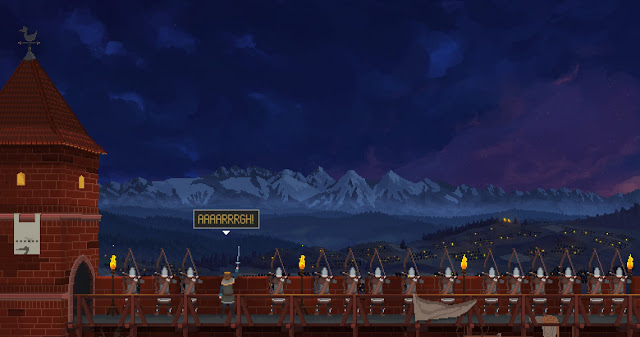 The problem is that those times where the game tries to get Game Of Thrones-style serious. It certainly canvases the themes it needs to to get there – drug epidemic? Check. The entire reason that the barbarian horde is on the way is that the king promised his 13-year-old daughter to them, and that is positively Martinian. It just doesn’t nail the landing with many of these moments. Part of the reason is that the game uses a variation on that silly “Sims-like” gibberish speech, which never stops coming across as comic in intent. Part of the reason is that rather than addressing the themes, the fact that the game aims for brevity in language means that it really just states them without exploring them to any greater depth. Also, Martin’s books didn’t mix the messed-up violence and rape with nonsense little plotlines that play out purely for levity. Yes, Your Grace finds itself tonally dissonant too often for its own good. Taken in isolation each of the components are great. Brought together, though, it shifts gears far too often and aggressively to be good for the vehicle.

It is a lovely looking game, though, with rich pixel art and a definite sense of European medieval to it. Each and every time I had the king walk up the stairs to inspect the parapets, I loved the way the game panned the “camera” up to give you a look far into the distance and anticipate the enemy army that is impending. The game does make it clear that it is coming sooner rather than later from the outset, and that anticipation that builds with every decision, knowing that it could have a ripple effect impact that could lead to your kingdom’s ruination, makes the strategic side of Yes, Your Grace truly engaging.

The developers have done a good job making sure most of the decisions that you’ll be making won’t have immediately obvious effects. The success of any “Reigns-like” really comes down to the ability to have you stewing over every decision, and you won’t be able to do that if you can immediately guess how each decision will impact on your nation’s fortunes. Even some of the most apparently obvious decisions here can have a heavy impact, and meanwhile, some of the most difficult decisions can result in unexpected bonuses. The value of Yes, Your Grace is at its greatest with the first play through, before you start to learn the results of each decision that you’re called to make, because the thematic strength is at its greatest when you allow your own conscience to guide decisions rather than some arbitrary knowledge that doing X will mean Y happens to make defeating the barbarian army easier. 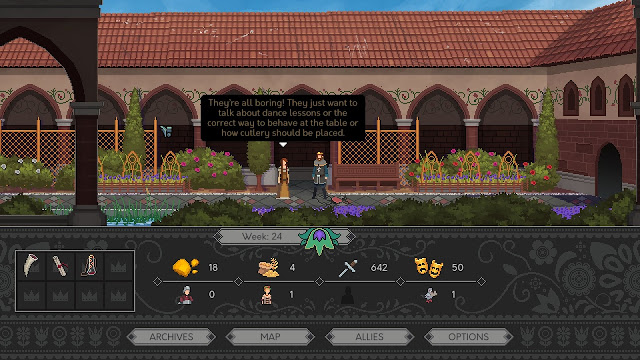 There are plenty of titles out there with a strong moral conscience that try to communicate with players by making “difficult decisions” the core gameplay loop. This includes This War of Mine, Papers Please, Reigns, Not Tonight, Beholder, Ministry of Broadcast, and plenty of others besides. Yes, Your Grace is guilty of not adding enough to this philosophy of game design, and thus I suspect that it is destined to be one of the lesser-remembered examples of the “genre.” With that being said, there’s still a lot to appreciate about this one, and it’s wrapped up in such a lovely package that, if nothing else, it makes for an excellent lazy Sunday afternoon experience.

Are Games Really Art? As in… do we genuinely believe this?