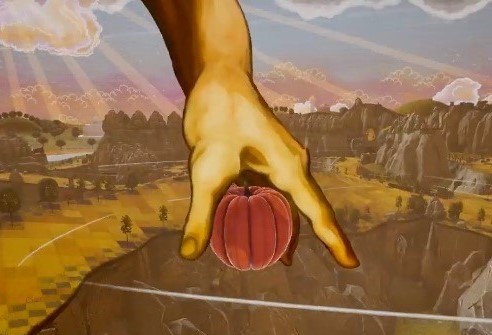 With Rock of Ages 3, ACE Team is done. That’s not a criticism of the game, but rather an acknowledgement that there’s just nothing more to eke more out of the formula. As an eclectic blend of tower defence, Monkey Ball, Monty Python and party game, this series has hit the point where there’s really nothing that can be added to it without rapidly diminishing returns. And, again, that’s not a criticism. That’s an acknowledgement of just how good – and complete – this game is.

Related reading: Our review of the previous Rock of Ages.

Where to even start with Rock of Ages 3? There are so many different ways to play around with it, and they’re all an excellent way to have a great time. Multiplayer is possibly where the loudest laughs are, and it’s four-player online, two players off. In multiplayer, the action is bedlam. The basic loop of the basic gameplay mode of Rock of Ages (called “War”) is broken down into two sections. For the first, as a timer ticks down, you need to set up defences across a winding downhill pathway. These defences range from lions held aloft by balloons to herds of cows, and more traditional weaponry and defences like walls, catapults, and piles of dynamite. The goal is to position these traps to do the maximum amount of damage to your opponent on the second part of the game; rolling a boulder down the pathway to crash into your opponent’s castle.

The more damage the boulder takes on its journey from these traps and defences, the less damage it will cause the castle at the end of the run (or it could possibly be completely destroyed), so the placement of those towers is important. You roll down a parallel path to your opponent – in other words, you both roll down the same maze of twists and turns, but you need to dodge your opponent’s defences, and vice versa. While there’s plenty of ridiculously zany stuff in terms of the design of these towers, Rock of Ages is actually a highly competitive game, testing your ability to think quickly and put down optimum towers, before then testing your twitch and action skillset for the Monkey Ball portion of the experience. 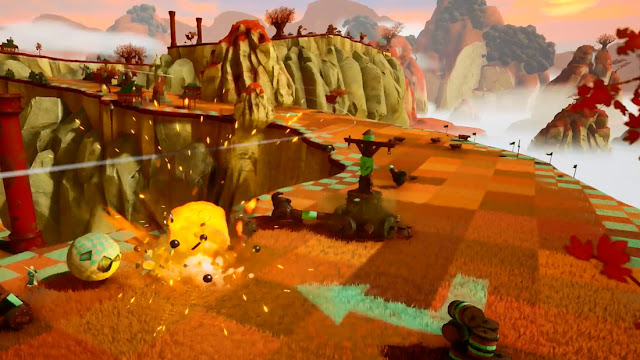 Naturally, because the action is so competitive, the game fares better in multiplayer, especially when victory comes down to that last roll of the boulder. It can genuinely become intense, hand-sweating stuff. ACE Team has further extended the value of multiplayer play with its course creator, which is every bit as good as it sounds. Entirely cross-platform, you can download community-created tracks or share your own, and already there are some wild designs in there with all kinds of brilliant tricks and shortcuts built-in.

At the same time, ACE Team has designed plenty into Rock of Ages for the single player. The “story” mode is a vintage homage to Monty Python, casting you in the role of a time traveller from Odysseus’ story that finds himself cursed and lost in the oceans of time. As a result, he ends up “fighting” (via boulder-rolling) with any number of personalities throughout history and legend – from Caesar to Genghis Khan, and right through to ridiculous figures like the Flying Spaghetti Monster. Tonally these are spot on with the Monty Python sketch comedy aesthetic, with a spot-on art aesthetic to match, and it’s eye-watering funny in its irreverence at points.

My only complaint with the single-player mode is that it forces you to follow the same progression system as mobile games, and I really dislike this type of progression system. You collect stars by completing levels, and then you need a certain number of stars to open the next set of levels. Unfortunately, simply completing the main “combat” levels doesn’t grant enough stars. Instead, you’ll need to play “bonus” levels for the extra stars. These are all variations on the basic rolling action, such as “Skeeball” (where you’ll need to roll over targets to collect points before launching your boulder off a ramp at the end and into a massive skeeball board to collect multiples of those points), “Avalance” (where you need to set up traps to deal with hordes of enemy boulders), and “Time Trial” (where your boulder is a bomb and you’ve got to get it to the bottom as quickly as possible). 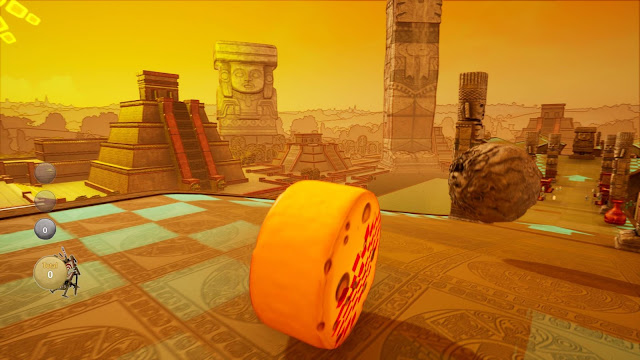 These diversions are all made well enough and do offer different kinds of challenges, but they’re also removed from the storytelling side of things, and therefore slow progress through the narrative right down. I do understand that that is a deliberate attempt to slow down what would otherwise be over quite quickly, but I would much rather ACE Team have the confidence to go for quality over quantity, and perhaps incentivise players to do those side things for additional unlocks.

There is a lot to unlock in Rock of Ages 3, and that’s integral to the game’s personality. Not every “tower” or defensive object is particularly useful, but you’ll want to use them all anyway just to see the zany effect they have (and by messing around with them all you will find some surprisingly effective combinations that you would never have expected to work). Likewise, there are so many boulders to unlock, including the earth (complete with a weaponised moon in orbit), a great ball of fire (yes), and a sand boulder that will slowly haemorrhage as it rolls along and degrades. Each of these boulders has wildly different statistics, strengths and weaknesses, and testing each them against the various levels is critical for building a great strategy. This does introduce the game’s one other weakness, though; loading times. On Nintendo Switch, they’re long enough to discourage experimentation. You’ll be left thinking of some very choice John Cleese quotes every time you realise that you’d be better off using a different boulder or combination of towers for the particular level you’re up against.

There’s nothing else quite like Rock of Ages out there. It’s a mesh of things that shouldn’t work together, and that’s why I suspect no one else has tried to replicate the mad genius of ACE Team’s work. Yes, Rock of Ages 3 has some mild issues with pacing and the loading times could be better to suit the experimentation that is at the core of the experience, but this is also the definitive version of something that is very funny, ideal for both single-player and multiplayer parties, and, thanks to that most excellent course designer, Rock of Ages 3 is functionally endless.