Everyone was psyched for the Pokémon stream, but let’s be honest: the excitement was really found with the Hatsune Miku stream that happened. I expected news for Nintendo Switch owners (and got it), but was pleasantly surprised by the addition of DLC for PlayStation 4 users! 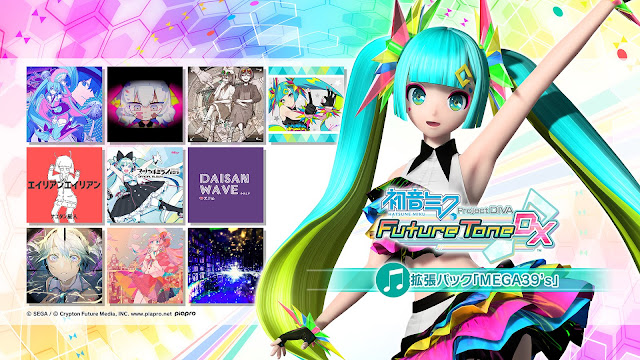 Hatsune Miku: Project DIVA Future Tone launched many moons ago for the PlayStation 4, and quite frankly all of the attention has been on the newer, shinier version for the Switch. But PS4 players have not been forgotten! Sega will release paid DLC titled Mega Mix Expansion Pack for the game on July 2 in Japan. This pack includes all 10 new songs from Hatsune Miku: Project Diva Mega Mix on the Switch, in addition to the Catch the Wave module. As of now, no worldwide release has been announced.

The second season of paid DLC for Hatsune Miku: Project Diva Mega Mix was also announced, and boy it it a doozy! From July 16th to September 17, Additional Music Packs 7 through 11 will be released (again, in Japan). First up is number seven, which includes seven new songs: Bless Your Breath (by Takeaki Wada), Koi wa Sensou (by ryo), Anata no Utahime (by azuma), Starduster (by JimmyThumb-P), StargazeR (by Kotsuban-P), Rin Rin Signal -Append Mix- (by Dios / Signal-P), and Rosary Pale (by Shinjou-P). It will include a new module titled Hasune Miku: White Eve. There will also be some free goodies in the Sega Pack, also available July 16, including three songs and a t-shirt.

Death Come True is extremely intriguing to me, for two reasons. One, it’s an FMV title, and we all know how much I adore FMV games. Two, it’s from Kazutaka Kodaka, creator of the Danganronpa series. Tell me that doesn’t make you at least a teeny bit curious! Anyway, on to the new trailer:

The developer, Izanagi Games, states that the game combines elements from film and video games to create an interactive movie. The story unfolds based on the player’s decisions, so of course there are multiple endings available. Set in a hotel, the protagonist is wanted for a series of murders that he has zero recollection of committing. He does, however, have the ability to Time Leap back to when he died. Decisions, death, decisions, death, on and on until he finally discovers the truth.

Death Come True will be released for mobile devices (iOS and Android) and Nintendo Switch on June 25. PC and PlayStation 4 users will have to wait to get their hands on it, but it will come to both at a later date. The game supports Japanese, English, French, Italian, Spanish, German, Korean, and Chinese (Simplified and Traditional) subtitle options.

All of our dreams have come true: a new Pokémon Snap is on the way

And by “our,” I don’t only mean those of us at DDnet: I mean anybody who ever laid a finger on an N64 controller to play the original Pokémon Snap. Two decades – we’ve waited two decades to capture adorable (and less than adorable) creatures no via Pokéball, but via camera. Take a look at the first trailer:

The name isn’t horrifically creative: New Pokémon Snap. Regardless, it is what the title promises! Explore unknown islands, from deep jungles to sandy beaches. Your character will move along on an invisible rail, with the goal being to photograph as many Pokémon as possible to build up your Photodex.

In addition to seeing Pokémon and capturing their images, you’ll also be researching their interaction with the natural habitat, possible leading to some previously-unseen behaviours! New Pokémon Snap will be available exclusively for the Nintendo Switch (but I bet you already knew that).

Announced last month, New Game+ Expo is a collaboration between 14 North American and Japanese game publishers. The group announced a presentation featuring dozens of games, set for next week, but we had very little to go on besides publisher names before now. Actually, after this trailer we still have very little to go on, but it’s better than nothing! Here’s the new teaser trailer:

The New Game+ Expo 2020 presentation will air via Twitch on June 23 at 11:00 a.m. EDT (June 24 at 1 a.m. AEDT). It will last one hour, and be followed by three hours of first looks and Q&A sessions. The presentation will be available via YouTube after the live stream ends.