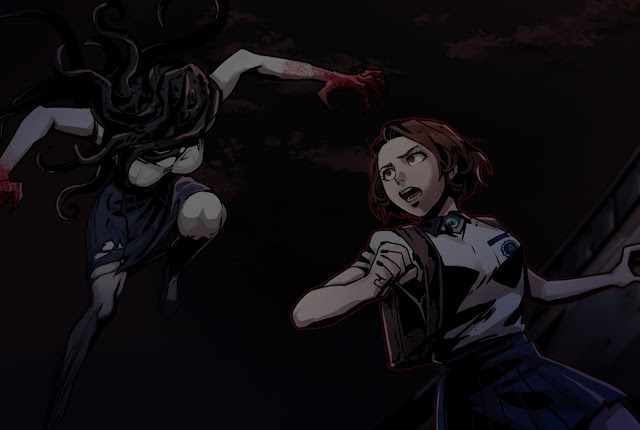 When you think that The Coma 2: Vicious Sisters was created by a team of just four people, it’s impressive. The art and general vision of the game is refined to the highest degree, and the way that it reflects on social tensions within Korea, ranging from its expectations that everyone be a workaholic through to its treatment of women, is a spot-on thematic application of horror. If only there was a slightly better game sitting under that vision.

For as long as humanity has been telling stories, horror has been used as a framing device to explore that which humanity finds terrifying. This is why the horror genre goes through phases, with sub-genres fading in and out of popularity as society becomes terrified of one thing or another. The gothic horror was a reflection on tensions between society and the Christian religion. Slasher horror was a conservative reaction to the relaxed attitude towards sex and drugs that the youth of the 70’s, 80’s and 90’s had developed. Now we’re seeing a resurgence of horror stories around apocalyptic scenarios because we are all living in a time of tension and concern around what future – if any – there is for humanity. These genres continue to be popular after they fade from the mainstream consciousness, of course, but as they do, they also become increasing self-aware, either as parody or pastiche, and so horror is a genre that is both a remarkably effective way of tracking dominant mindsets and tensions within society.

The Coma and its sequel both act as a useful insight into Korean school environments, then, both in terms of the pressures that the system places on students and the behaviour and attitudes of the students themselves. In the opening moments of The Coma 2, we’re introduced to Mina. Her best friend is dreadfully sick and in hospital, and she’s being harassed by the school’s baseball hunk, and yet on arriving at school she finds herself getting a talking to because her grades are not up to scratch. Then, after a study group wraps up deep into the night, Mina finds herself finally heading home… only to somehow wander into an alternative universe built of pure horror. 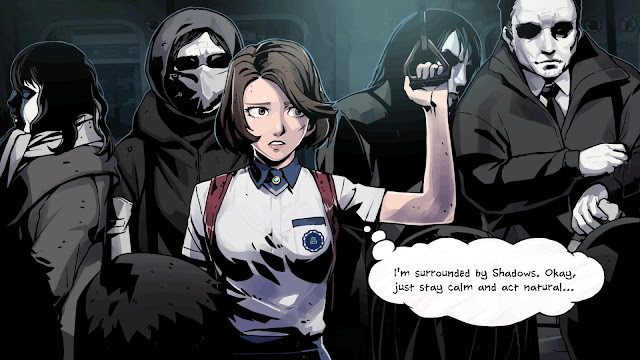 The first Coma used the limited setting of a school effectively, but The Coma 2 is much more open. With The Coma 2 you’ll still explore that school, but also find yourself moving around other environments, including a police station and, most memorably, a shopping district of ghosts, goblins, and eldritch monsters. The more open, less focused setting flows through to the narrative and general experience, but the broader scope does give you a better sense of the extent of the nightmare, which is the ideal way to build on what the original offered. These are linked stories, though self-contained enough that you can play this one without having played the original. Mina’s a much better protagonist, though, as she’s a girl, and it’s a simple fact that girls are better and more thematically appropriate protagonists for the stalker horror genre. The reason’s right there in the title – “stalker horror” – and in this era of MeToo, the intensity of stories about hulking monstrosities hunting girls is all the more poignant. The Coma 2 doesn’t have the same heavy sexuality tones that other great examples of the genre do – think Clock Tower 3, Haunting Ground, or Creeping Terror, but it does touch on it in an effective and noticeable way nonetheless.

The Coma 2 probably doesn’t go far enough with it, though, and in general this game is far too restrained for its own good. Yes, there’s some bloodletting and the monsters are certainly ugly, but it’s hard to shake the sensation that the developers were hesitant to push boundaries because that might upset players… and I’ve got to tell you, “restrained” and “Korean horror” are not common bedfellows. It is what it is though, and as a result, the game does come across as pretty flat at times, as though it’s going through the motions but not that interested in being living up to its potential to be truly terrifying. What doesn’t help here is the game’s quest structure, which is inevitably a series of “go here to get item Y or meet person Z and then come back… oh, and we’ve arbitrarily blocked the shortest route to that location so you’ll need to solve puzzles and take the long path around, dodging monsters along the way (of course).” It becomes too formulaic, too quickly, and given how slowly Mina’s default walking speed is, there are times where the atmosphere just drains out of the thing completely. When the game’s on, it hits all the right notes, but those are separated by long periods of damaging downtime.

It also doesn’t help that the gameplay bits are a little clumsy and undercooked. When a stalker shows up, Mina needs to run and try and find somewhere to hide. The problem is that when she has to open doors and duck into hiding spots, there’s a “press and hold button” mechanic at play, and while this does heighten tension (because for that split second you’re standing around vulnerable), it’s also quite easy to miss the target spot you need to stand for the “press and hold button” icon to show on screen, and end up with a game over because you often only get one shot at finding safety. Meanwhile, when you’re not fleeing, you often need to be looking for items that unlock doors, and to give you an idea of just how badly this can go at times, in one instance I spent an hour wandering around the market zone looking for a key. The game usually highlights items that can be picked up with a flash of light, but for this one key, the developers decided not to give you any visual cue where it’s hidden. You do find a little sketch that points out where that key will be, but it’s vague enough to miss, and at no point does the game indicate that it’s going to arbitrarily ignore its own rules. As a result, I spent an hour wandering around, fairly certain that I’d found the spot where the key was, but not realising that the key wouldn’t be indicated by a flashing light. That’s just bad game design. Never establish a set of rules and then undermine that without bothering to tell the player. 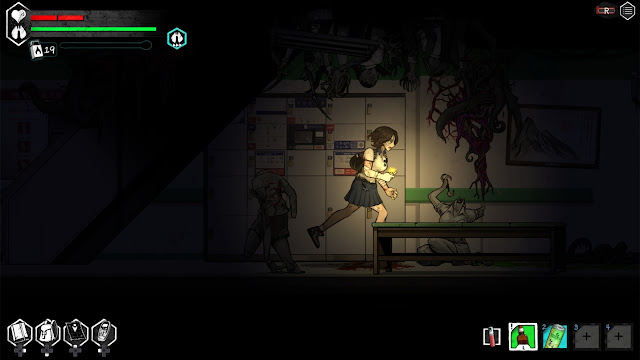 Finally, there is crafting in The Coma 2. No. No. No. NO. Developers, I understand that collecting endless stuff to craft other stuff is in vogue and every AAA-blockbuster game does it as a way of forcing players to explore their worlds and add engagement to the overall experience, but I’ll let you in on a secret; crafting is a dreadfully boring mechanic and AAA-blockbuster games aren’t better for forcing players to find workbenches and scour the environments for resources. The Coma 2 is a very light touch when it comes to the crafting stuff but… just no. No. NO. This is a horror game. I want to run and hide from monsters. Not hammer out caltrops and manage resources.

For all these negatives, there is so much to like about The Coma 2. The art is impeccable and every time the game broke into its comic-book style storytelling cutscenes I wanted to screenshot everything. The writing is spot-on, too. From the annoying classmate with her very teen girl talking mannerisms to the boy that creeps you out from just a few words (actually, boys, Mina’s got to navigate a gauntlet of creeps), right through to those carrying the esoteric mystery, every character is distinctive, interesting, and adds something to the overall scenario. Mina, of course, is the centrepiece, and she’s a truly great character.

As a final note, though, the DLC is deeply disappointing. It’s completely optional so I don’t feel like I’ve missed out on it by not buying into any of it, but it’s just a set of alternative costumes, and they are boring. What’s more, they do in their own way highlight what I was talking about that this game is far too hesitant to push boundaries. Each DLC simply swaps out Mina’s standard school uniform for another uniform or, alternatively, some variation of jeans or shorts casual wear. These are all so minor in their differences to the base costume that they would have worked better as in-game unlocks. The DLC should have been for silly, outrageous or edgy costumes, but instead, you have the opportunity to buy “beach bum” DLC which, in perhaps a first for DLC ever, is a beach-themed DLC pack that is not even a swimsuit. 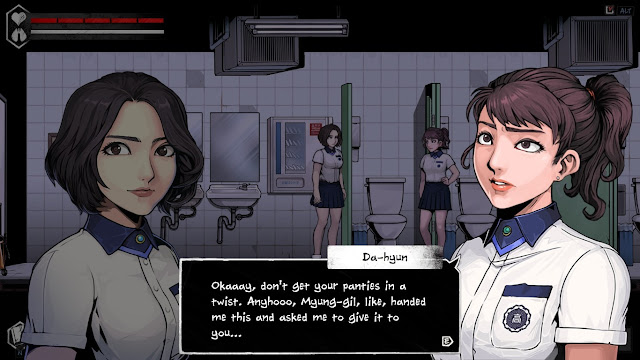 That’s a minor thing to criticise, but again, it does speak to the overarching issue with The Coma 2: It’s got all the right ideas in there, but it’s so timid in exploring any of them that it comes across as altogether too safe to be good horror. Reframing it as a creepy adventure game would have helped, but there too, there are the likes of Tokyo Dark that show just how far things can be pushed, and The Coma 2 would struggle in that framing too. I love everything that the developers have done with the game, but I do want to be challenged by horror – not in the gameplay sense, but challenged to think – and unfortunately, this game has all the potential in the world that it doesn’t quite manage to deliver on. Now, with all of that said, it is an enjoyable and vivid little indie game, and is a significant improvement on its predecessor. You get the feeling that this developer is just one more swing at the ball away from a home run, so hopefully they do get that chance.