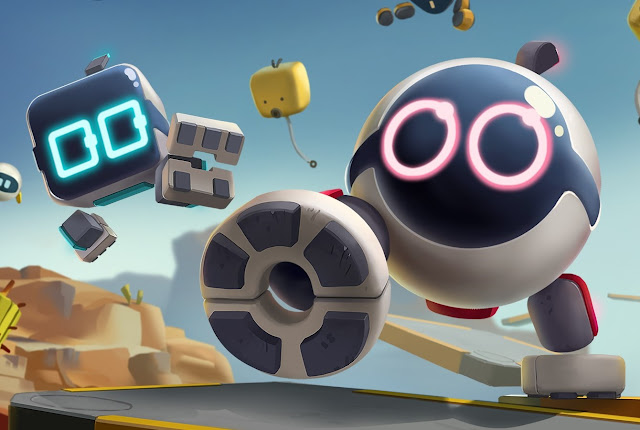 NExT Studios is a China-based developer and a subsidiary of Tencent which has a back catalogue that doesn’t make any sense. The developer is responsible for titles such as the mech-based fighting game Metal Revolution, the clever sound-driven adventure game Unheard and the CCG-mobile-MOBA Spiral Spirits, along with a dozen other games of different genres. The only conclusion I could find to account for this is that the studio itself is huge, spanning at least three cities (from what I can gather from the twenty-seven! vacancies on its website), and so all the games are made by different teams.

It seems that Tencent funding has been lucrative enough to grant any creative freedom possible, and NExT Studio’s games consistently win industry awards for the way they put an interesting spin on existing game design philosophies. With China being such a large and growing market for video games since their lift on the console ban, it’s good to see the design ethos catching up to par with the rest of the world.

Enter Biped. It’s Next Studios’ eighth game chronologically, and it follows the same design pattern of a game like Snake Pass, Human Fall Flat or Octodad. It could very technically be called a 3D platformer, but the challenge is more in manipulating unconventional controls to get across the level. I got the same feeling from Biped’s tutorial that I got from Snake Pass: I thought, “if I were Mario right now, this would be so easy”. But instead of a traditional platformer protagonist, Biped puts players into the shoes of a blocky robot with two 360-degree rotating legs, each controlled with a thumb-stick. Navigating the game’s various worlds will involve the player to wrap their heads around this control scheme, and pull off surprisingly acrobatic feats with their clumsy robot feet. 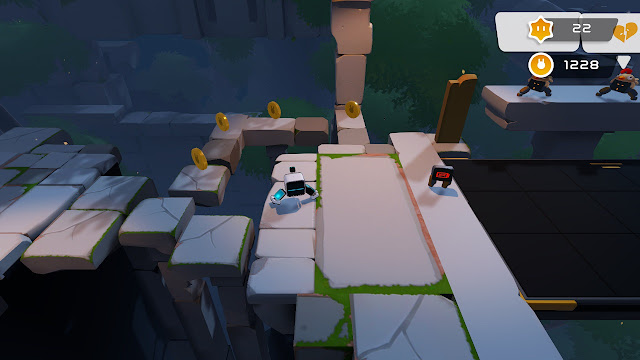 The challenges and puzzles the player comes across are quite standard by 3D-platforming fare. There are lines of coins guiding players down a largely linear path, and they’ll need to traverse a variety of uniquely responsive blocks to avoid the ever-present bottomless pit. There is the occasional break in the momentum; exploratory segments which require finding a key, or speedy on-rail segments which provide some visual spectacle. Each world has its own theme, whether it’s desert, ice or water, and so will have its own unique mechanics to match. Nothing is particularly unfamiliar or surprising, but that’s just as well, since it’s the robot-walking mechanics which are centre stage here.

Biped solves the main gripe I had with Snake Pass in that it’s clearly an experience meant to be shared. The game’s default mode is co-op, where two players try to collaboratively make their way through a gauntlet of platforming challenges by using pressure switches, gravity and other environmental elements. The level design is reminiscent of Portal 2’s test chambers in a way: they challenge the player to communicate and formulate a plan together, and most of the fun is shared because each player had a hand in the success. Biped’s co-op campaign is lengthy, with eight full worlds that can take 20 minutes each to complete, and then two challenge levels for each world that further ramp up the stakes. Each level also has a rather strict par-time to beat, as well as secret collectibles to pick up.

In single-player things are sadder; there are far fewer levels to tackle, and the level design does not feel as inventive either. There are moments where the game provides AI companions to help you with things like gravity or timing puzzles, but at other times you’re going through things alone and missing out on what possibly could be hilarious moments of misunderstanding and discovery. I found that, especially with a lack of solo challenge levels, playing alone didn’t spur the player on to develop any mastery of the game’s controls; the puzzles were difficult but rarely insurmountable, and I found myself breezing through them with mostly trial-and-error. 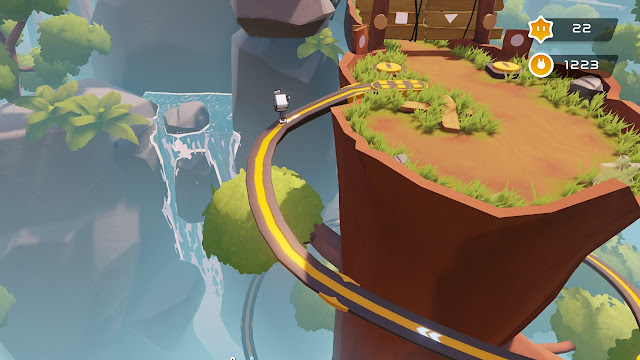 Next Studios keeps things simple with the graphics and music. Environments are brightly colourful and also very readable, so that the path forward is always clear. The game mercifully doesn’t have any camera controls (not that the player has any open thumb-sticks, anyway) and instead co-opts the system used by Super Mario 3D Land/World: to have a stationary and contextual camera that shows the path forward, with some hidden goodies left just out of sight. The game’s music is crafted from a variety of international sources and well documented on the studio’s blog, and I particularly liked how it matched the game’s eclectic variety of worlds and challenges. To say one negative about the high production values, however, is that the game feels too-large for the Switch for no real reason. The download is more than 5GB, which for those who haven’t yet updated their SD Card, will be a big ask. In handheld mode it’s also a big drain on the fan and the battery, but I imagine few people will want to play this in handheld mode anyway.

Altogether, Biped is a game which is unabashedly joyful. There is so much energy and playfulness that comes from the mechanics and level design. It’s easy to forget the oddly dramatic narrative, in which a solar flare destroys all communication systems on Earth and the two robots need to restore the balance, or something. There’s just too much fun to be had sliding down ramps and swinging from vines, instead.

If you’re a fan of clever puzzle-platformers and have a co-op partner who is the same, then Biped is bound to bring you hours of delight. If you can quieten that whisper in your brain going “but why can’t you just jump”, then the game’s inventive puzzles and clever iterations on its mechanics will easily win you over. It’s almost sad that Next Studios doesn’t seem to be interested in sticking with this genre, or outputting something else that’s happy and co-op based in the near future: they’ve certainly proved with Biped that they’re very good at it.