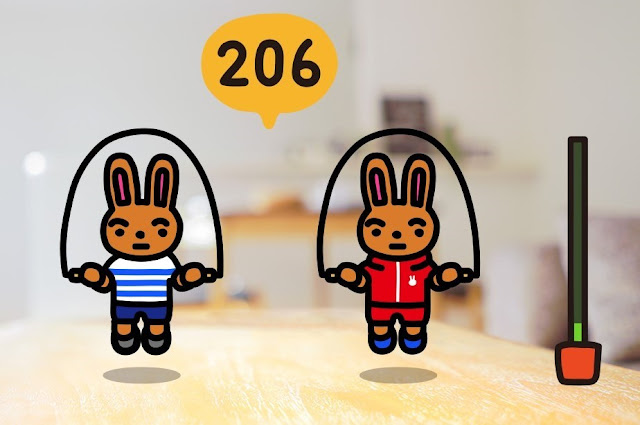 I know a lot of people have struggled with fitness over the last couple of months. Between lockdowns and social distancing, keeping up a fitness regimen has been difficult. Whether you’ve technically been allowed to go out or been on hard lockdown, motivation to put yourself in a world suffering through a pandemic – even in relatively sheltered countries such as Australia – has been low for a lot of people.

Case-in-point: Gyms here opened up last week and though I’m itching to get back in there, the idea of being around other people who are sweating all over the place just isn’t appealing right now. Meanwhile, I went to a dance lesson for the first time in three months last weekend, and it hurt like I’ve never danced before. I know I need to get fit (and I am genuinely annoyed at myself that I haven’t found some way of doing something through lockdown), but also I’m not quite ready to throw caution to the wind just yet.

As people went into lockdown Nintendo’s Ring Fit Adventures apparently went into a sales overdrive. It’s not going to turn you into a great athlete by any means, but it was a fun way to keep some level of activity going. I know other people downloaded copies of Just Dance and the boxing fitness app to get themselves moving in other ways too. But more is always welcome, and Nintendo’s own developers seem to have also felt this, because a small team of them developed a new little fitness app that Nintendo has decided to now release for all Switch owners for free. Completely free, with no DLC or additional purchases involved. It’s called Jump Rope Challenge. 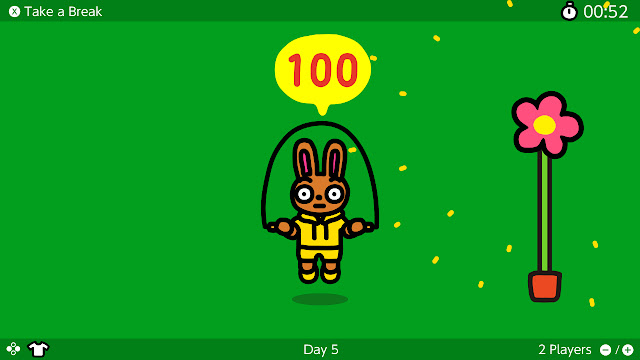 It’s as simple as simple gets. You hold the Joycons as you would ends of a skipping rope, and imitate the action of skipping, hopping up and down in your living room as you do, with the “game” keeping count. That’s it. That really is all there is to this. It tracks the number of skips that you do, challenging you to hit 100 per day (though you can adjust that higher if 100’s a little too easy for you).

Technically you could just sit on the lounge and swing the remotes, but there’s no reason to do that with this game, since there’s no benefit to “cheating.” There are no unlocks, no leaderboards, no guesses to your “fitness age.” All Rope Jump Challenge does is count the number of fake skips you do, allowing you to go through the motions of skip rope, without needing the space that an actual rope would demand.

This app was created by a small team with Nintendo who were, apparently, bored themselves while working from home, and looking for ways to give themselves quick breaks for physical activity. You won’t play this for more than 5-10 minutes per day, so it hits the brief that this small team decided to work toward for their own goals, and it does have all of Nintendo’s charm. As you skip, a little bunny avatar (that you can dress as you like), hops along with you. There’s even a two-player mode where you and a friend or family member can compete to get the most skips. 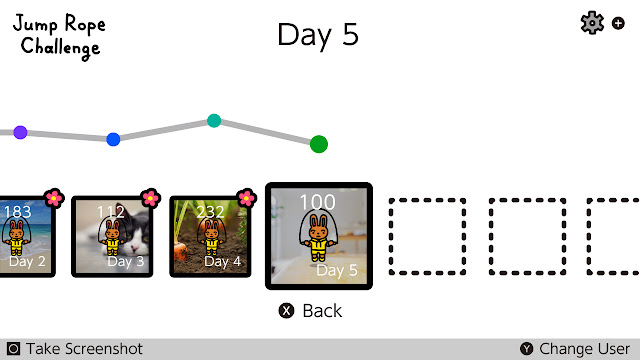 If you play this as intended and go through the proper skipping motion, it is surprisingly good exercise. Skipping is a full-body workout, and ten minutes or so in this app will get a sweat going to go with the score.

What’s more, as a simulation, the exercise is also lower-impact than actual skipping can be, and you can focus on continuous, good quality exercise, as you don’t run the risk of disruption to the rhythm if the rope slams into your legs or hits something around you. One of the problems with real skip rope is that you’re best off being on a hard surface like concrete until you become very, very fit. And you’ll almost certainly need to be outdoors for the space the exercise needs and the potential damage it can do. With Jump Rope Challenge you can go through all the same motions safely, indoors, and on any surface.

And, if you live in a space like an apartment where jumping might disrupt those living below you, you can create the same exercise effect by paring the skipping action with flexes (bends) of the knee. This is also useful for people that might have ankle injuries that make the springing action difficult. In other words, Jump Rope Challenge is a far more accessible form of exercise than real skip rope, and while the workout might not be as intense, you can still tailor it to your needs much better. 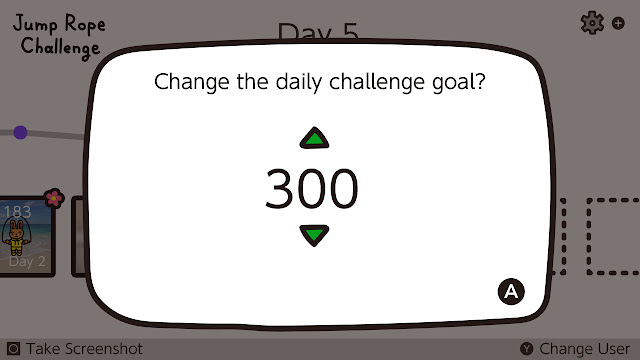 It’s a good thing that Nintendo has done to release this to Switch owners for free. It’s by no means something worth charging for, but it is Nintendo quality and if it does encourage people to stay at home, but also get up and be a little more active while limited in the means in which they might normally exercise, then right now that’s an objectively good thing.