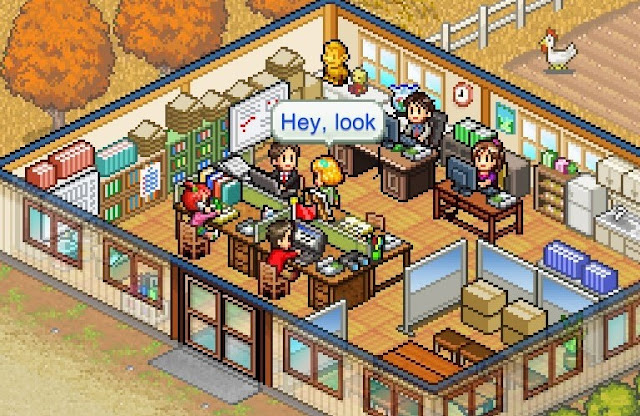 Why do I keep doing this to myself? Kairosoft has released TWENTY-SIX of its light simulation games on to Nintendo Switch now. I own at least half of them. Every time I get hooked deep into the simple, charming presentation and super-accessible, comfortable gameplay loops of these things, and then ultimately burn out on how shallow they are after a couple hours of play. Every. Single. Time. And then I go and buy a copy of the next one.

Magazine Mogul hits particularly close to home though. As a big-time fan of the magazine format, and having worked in magazines at various points through my career, I’ve seen the decline that they’ve suffered, and it has been painful to watch. People simply no longer want to pay for the printed word when they can instead get free content via boomers, Karens and propagandists on Facebook, and while the magazine industry has tried to pivot to become more “book-like” in terms of themed issues and higher production quality, it’s still a dying industry. This trend has been slightly delayed in Japan, where bookstores tend to have a floor dedicated to magazines still, and in certain fields magazine sales remain healthy. Magazine Mogul comes from this context, and the idea of running a healthy magazine in a healthy market for them is a highly appealing fantasy to me.

As with all Kairosoft games, it’s effectively impossible to “lose” in Magazine Mogul. You’ll start out with a small team of three writers and designers and selling only a few copies of your magazine, but it’s inevitable that you’ll grow, and no series of decisions that you can make will lead your magazine and publisher to bankruptcy (I told you it was an appealing fantasy). Eventually, you’ll be the #1 publisher in the country and not have much left to do, and that’s the point that you’ll burn out on the game and go and play something else. 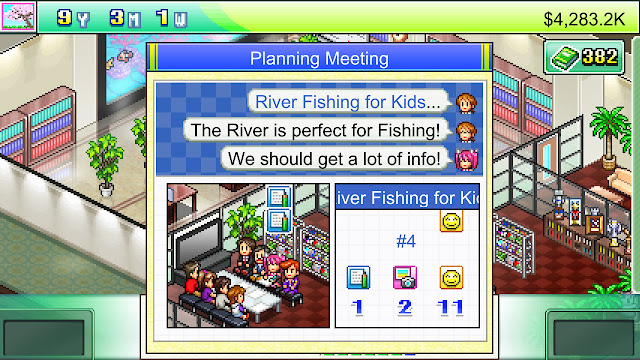 The gameplay itself works much like Game Dev Story. You need to select a location in the local town (part, river, cinema), and then a demographic and topic. If you pair things up well, then your article will get a boost in the three “attributes” that determine its quality. If you don’t, then you’ll start off with an inferior article by default. Then the team will start researching the article (represented by a percentage of 0 to 100 per cent), and as they do more points will be added to the attributes based on the quality and number of employees. As you get more and train them up, they’ll add more to the article and the end product will be better.

They’ll also add “typos” at random (much as the games you “develop” in Game Dev Story acquire “bugs”), and after the article is finished (100 per cent), the team will then work on removing the typos. Once that’s done it’s time to publish! The higher the various attributes get in the end the better the magazine will be and the more copies it will sell. Then you’ll do it again and again.

There are a couple of things that add to the overall gameplay that help step Magazine Mogul away from Game Dev Story a little bit. You need to “scout” new locations, for example, by sending teams out to explore and talk to local areas. Talking to people earns you new topics for the magazine to cover. These are menu-driven, but a nice break from the main loop of creating new articles. You’re also responsible for allocating the down budget to develop the town (no, I don’t know why a magazine publisher would end up with that role either), and that allows you to bring film festivals, develop the town as a gourmet hotspot, or focus the town on providing great shopping experiences. Stay within the town budget and the city will grow in population and speciality, giving you the perfect audience for your themed magazine articles. 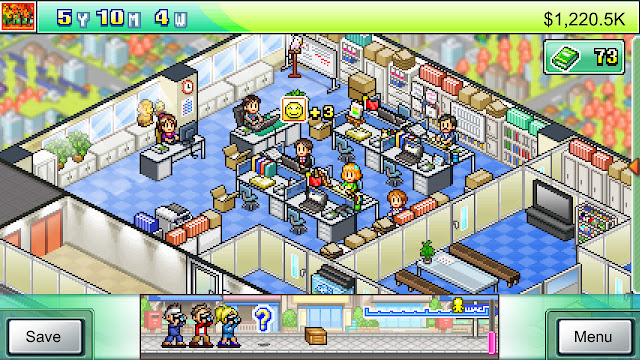 This is all wrapped up in the traditionally gorgeous Kairosoft pixel art charm. We all know what that looks like by now, and it’s backed by the traditionally infectious Kairosoft soundtrack. One of the reasons this developer has been so successful is that its simple loops are really easy to transfer, and because the presentation is so completely inoffensive, its so easy to pick up and enjoy multiple editions of the Kairosoft formula. Magazine Mogul is not different enough to Game Dev Story, and yet the veneer of managing an entirely different profession somehow makes it different enough.

The lack of creative innovation from one Kairosoft title to another becomes exhausting if you play more than a few of them, and Magazine Mogul is an incredibly shallow experience. It’s a pick-up-and-play delight, and it has an appealing theme, but where Game Dev Story is so well regarded because it established Kairosoft, Magazine Mogul is really starting to wear out the welcome. It’s frustrating because all Kairosoft would need to do is throw caution to the wind and make just one serious simulation game with this set of production values and the company would completely reinvent itself for the better, I feel. The focus on unrelentingly casual experiences is nothing more than a game of rapidly diminishing returns for the company, and I just can’t see even the most hardened Kairosoft fan caring about these new releases any longer.

See a bit of Scarlet Nexus in action