Space Channel 5 is already iconic enough, as the rhythm title was quite popular on the Dreamcast. Originally by Sega, the VR version titled Space Channel 5 VR: Kinda Funky News Flash! was developed by Grounding, Inc. and released earlier this year for PSVR. HTC Vive, Occulus Quest, and Steam VR releases are also planned. For now, though, we can be content with the content (ha) coming to the game, as it features our all-time favourite: Hatsune Miku! 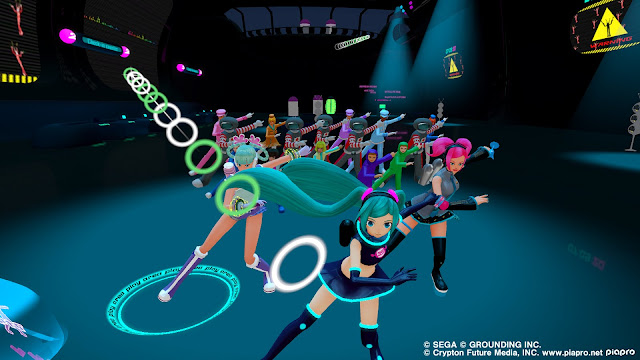 The DLC, titled Space 39 Miku Pack, includes a stage where the player can dance with Ulala and Miku, as well as the clothing and appearance options needed for Ulala’s outfit to match Miku’s. The DLC will be released on July 27.

Space Channel 5: Kinda Funky News Flash! follows Ulala as she strikes life-saving dance poses to a cool beat. The more poses, the more viewer ratings she’ll get as a journalist. It’s all kinda strange and very colourful (and there’s nothing wrong with either of those things).

Death end re;Quest 2 is being released in the West!

Idea Factory International has announced that it is bringing Compile Heart-developed Death end re;Quest 2 to North America and Europe this (Northern) summer. It will be released for PC via Steam and PlayStation 4. To celebrate the news, here is the game’s opening movie:

Death end re;Quest 2 follows Mai Toyama as she seeks refuge from a traumatic past. She enrolls at an all-girls dormitory in a small town. The same small town where it’s rumoured her sister was last seen. Mai wants to find her sister, but instead find the terrifying inhabitants of the town at night. The game is split between day and night. During the day, visual novel gameplay is in full effect, as Mai can visit the dorm and search the town for clues, At night, the town because a haunted shell of itself, prompting RPG gameplay to begin.

DDnet’s Editor-in-Chief Matt S. gave its predecessor 4.5 stars, https://www.digitallydownloaded.net/2019/02/review-deaths-end-request-sony.html noting, “As a blend of visual novel and JRPG, and as a blend of science fiction and conspiracy thriller that has a good, sharp bite to it, I would have to say this is the most inherently interesting game that Idea Factory has created to date.”

Dontnod is opening a new studio

Based out of Paris, France, but Dontnod is poised to open a new studio in another French-language city – this time in Canada! The studio will open in Montreal, Quebec (Canada) and will employ from Montreal’s local talent pool. Make no mistake, Montreal is a huge city for developers ranging from indie to AAA, and Dontnod joining the ranks is incredibly exciting.

Dontnot Entertainment is the developer behind Remember Me, the incredibly popular (and just flat-out incredible) Life Is Strange series of titles, and Vampyr. The new Montreal studio will be working on a new, unannounced project. The French studio is currently working on Twin Mirror and Tell Me Why.

CEO Oskar Guilbert spoke of the announcement via a press release: “Our goal is to create video games as close as possible to our community’s expectations. With this new international team, we will be able to envision even more ambitious titles and keep writing wonderful stories for our players.”

The next PS5 event is set

After weeks (and weeks… and weeks…) of speculation, Sony has finally announced its next digital PlayStation event. There were rumours that this event would be the reveal of the PlayStation 5’s physical design, but based on Sony’s press about the event, it will definitely be focused on the games more than the hardware.

“I’m excited to share that we will soon give you a first look at the games you’ll be playing after PlayStation 5 launches this holiday,” Sony Interactive Entertainment President and CEO Jim Ryan writes via the PS Blog. https://blog.playstation.com/2020/05/29/youre-invited-a-look-at-the-future-of-gaming-on-playstation-5/ “The games coming to PS5 represent the best in the industry from innovative studios that span the globe. Studios, both larger and smaller, those newer and those more established, all have been hard at work developing games that will showcase the potential of the hardware.

The presentation, titled “Future of Gaming,” will be unveiled on June 4 at 4:00 p.m. EDT (or June 5 at 6:00 AEST). It will run for just over an hour, and be available via YouTube and Twitch.