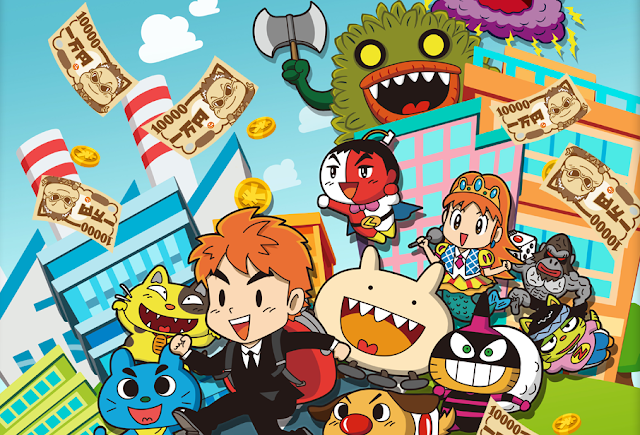 To explain why Billion Road has so completely latched its claws into me, I’m going to need to start off with a bit of a history and art lesson. While the ultra bright and cheerful graphics may look like an off-brand Itadaki Street (Fortune Street) or Mario Party, Billion Road has a whole lot of cultural relevance going for it. As you all know, I do love my games to be culturally relevant, and this is a core part of Billion Road’s appeal.

Related reading: Another game based on the Tōkaidō is the game titled, imaginatively, Tōkaidō. Our review of it on iOS.

Back during the Edo era, when Japan’s border was closed to the world, the reining shoganate, based in Edo (Tokyo today), had a mandate that all regional lords would frequently travel to Edo to attend meetings and visit their wives and firstborn sons (who were kept as prisoners to the shogun). The reason for this was quite insidious. Because the lords would need to be accompanied by a large retinue to prove how powerful and important the lord was, the expense of constantly marching back and forth across the country would ensure that none of these lords has the kind of money to rise up in a rebellion against the shogun. Even if they did, the shogun had instant access to the lord’s son and heir for execution (the wife too, though we are talking about a time in history where the threat of an executed wife weren’t a disincentive to rebel).

Anyhow, the the less-than-pleasant reason for all of this did have one positive benefit – Japanese roads back in those days were spectacular things to journey across, as they largely existed to service these big spending lords. Of all those routes, none was as revered as the Tōkaidō – a beautifully scenic route between Kyoto and Edo which was dotted with magnificent inns, luxurious waypoints, and gourmet food stalls. That route was so spectacular that it inspired many artists, including the legendary uikyo-e artist, Hiroshige, who would create The Fifty-three Stations of the Tōkaidō based on his journey along the road. That series of woodblock prints shows in stunning detail every element of culture and experience that you can have along the road. To this day people love walking or cycling the old Tōkaidō route, and while much of the scenery has been urbanised, there are still plenty of sites, smells, and flavours that give you that tantalising hint of what Hiroshige – and many others – once experienced. 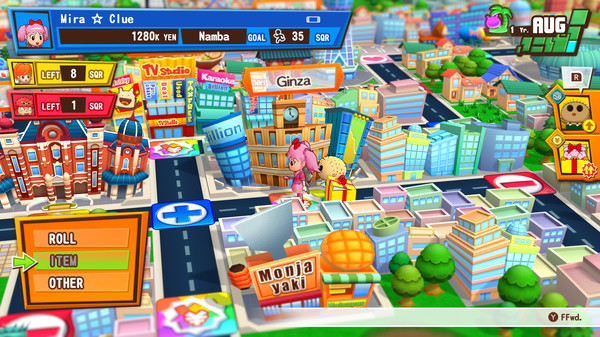 That’s one part of the lesson (I’m getting to Billion Road, I promise). The second part is to acknowledge a quirk that I’ve founds with the Japanese country – this is a nation of people who are intensely proud of their local specialties. From the mighty Sasebo burger to Tendo’s exquisite shogi sets (not Nintendo, Tendo the city), and from Hiroshima’s okonomiyaki to Hiraizumi’s iron kettles, every town, city, and location has something that you’ve just got to eat or an artifact that you must bring back as a souvenir from your time there. It’s brilliant for both domestic and international tourism, and it’s genuinely wonderful exploring every area’s unique qualities and seeing entire towns and cities motivated around mastering one particular thing.

Billion Road is all of that cultural heritage of Japan rolled into one. It’s a board game that depicts journeys across the entirety of Japan, from Okinawa through Hokkaido, and that board is covered with iconography that represents the key sights that you’ll find on your own journey across the country. From busy metropolitan areas to the more rural towns known for their fishing and wilderness, the entire (giant) map of Billion Road is richly detailed with a loving recreation of everything that people love to see in Japan. It’s no more realistic in those depictions than the Fifty-three Stations ukiyo-e prints were, but that wasn’t the intent. The intent was to highlight the most aspirational side of Japan to go with the aspirational gameplay (of building up those billions in cash), and it’s very much mission successful, because even with all the parts of Japan I’ve seen, travelling around this game board had me checking up some local sights that I’ll want to visit next time I can actually fly over there (the world can’t get over COVID-19 quickly enough).

Local specialties are represented by the kind of “properties” that you can buy at each city that you visit as you travel. A little like Monopoly, landing on a “city” square allows you to buy property. Unlike Monopoly you won’t earn income when another player then lands on that square, but you will get a big, fat payout at the end of each year from your investment. What’s important to note, however, is that each of these properties that you can buy represent local specialties. It doesn’t really matter if you’re buying a noodle shop or a zoo, other than the different costs and then end-of-year returns, but being able to buy into each city’s specialites is the perfect flavour text to go with the way the game represents Japan. 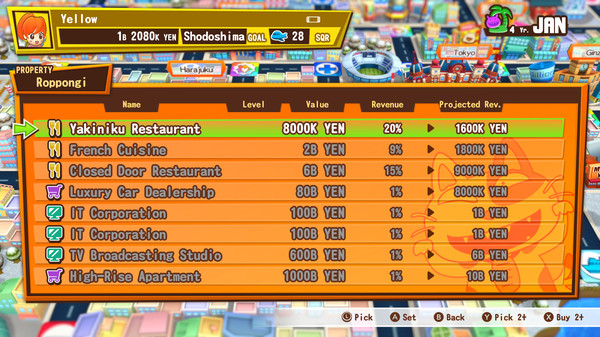 As you can guess from the above it was the aesthetics and thematic design of Billion Road that got me into the game initially, but I’ve continued playing since because this is a really well-designed board game. As mentioned, one way that you can make money is by purchasing property and then waiting for a year to roll around. There’s more than enough property scattered across the land, and the fact that there’s no fees for landing on someone else’s property means that Billion Road doesn’t feel like success is down to such a cruelly fickle thing as a throw of the dice. The biggest cost in landing on another player’s space is simply wasting a turn. Additionally, you’ll have plenty of money coming in from landing on blue “payout” spaces, reaching target cities before other players, and various other effects that come into play as the game plugs along. For the most part Billion Road does feel like a game of accumulation, and you’ve got freedom to chart your own path across Japan, and so it doesn’t have the frustration of bad luck absolutely ruining your game, and even last place can still feel like an active participant in the action.

Related reading: Five board games that you should play if you are interested in Japan.

Adding more strategy to the basic pathfinding are the monsters and items. Monsters are critters that you’ll encounter as you move around, and each has a different ability. Some will give you free money and property. Others will “attack” your opponents (generally to steal from them or make them miss a turn). Another group of monsters protect you from enemy attacks, while a final group specialises in attacking the giant kaiju monsters that appear from time to time. Knock them out and you’ll get a huge boost in cash. Fail to do so and they’ll rampage across Japan, damaging or even destroying people’s property as they go.

You can have up to three monsters with you at a time, and you’ll need to constantly mix up the group as the situation demands as you play. Meanwhile, you can also use items, which have similar effects (or simply let you roll more dice to move), but are single use only affairs. Making good use of these monsters and items can go a long way to mitigate against poor dice rolls, and help to elevate Billion Road well above what the likes of Monopoly could ever offer. 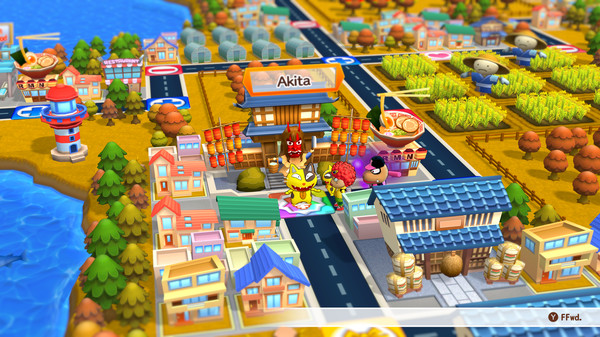 There are two core modes of play. One is a standard mode, where up to four players (any combination of human and AI) can play games that last as few as three in-game years (which will take about an hour to finish) to 99 in-game years (almost an entire weekend with very little break in-between). There’s only one map in Billion Road, unlike the likes of Mario Party and Itadaki/Fortune Street, but it’s such a large map in scope that there doesn’t need to be a second. This thing is very replayable. The other mode is a single-player knockout game of 30 in-game years length. Every five years the lowest-ranked player is knocked out, and a more advanced, better resourced AI opponent appears into the fray. Actually getting through all 30 years is challenging, and the rewards are relatively light, with just some unlockable costumes. After you’ve played through this once, the incentive to do so again just isn’t there, and from that point Billion Road will largely remain in storage for those multiplayer situations. There’s also no online multiplayer, which is a bit of a downer, but understandable given the length of even the shortest games, and the reality that games like this are just that much more enjoyable when you’re having beers and socialising while you play.

Billion Road isn’t perfect. The interface makes it difficult to track some of the finer points of detail, particularly around property ownership, and a lack of minigames and other events of excitement mean there’s a draining level of downtime in the game where you’re just waiting for your next turn to roll around. However, for the board game enthusiast this is a true Japanese experience. Under the bright colours and ridiculous wealth being thrown around (you’ll be worth billions in just an hour) lies something that has clearly been created by people who love the unique micro-cultures with Japan, and the sheer delight that you have in simply travelling across the country.