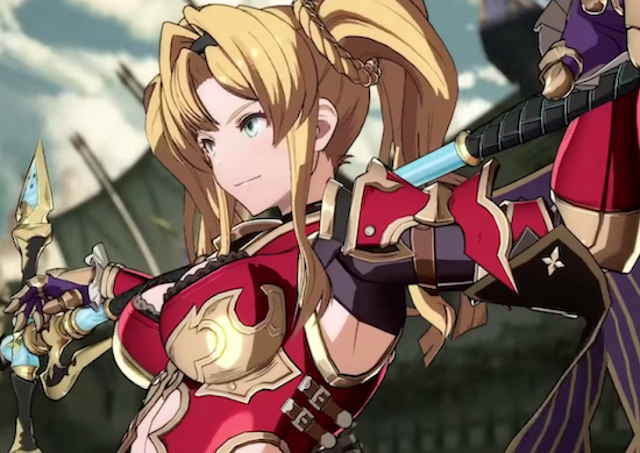 Say what you like about the quality of the Arc System Works licensed fighters (no, I’m not a massive fan of that Dragon Ball one), one thing that is undeniable is that the team make sure that every fighting game spin-off they work on is reflective of the base material. Dragon Ball FighterZ was a perfect recreation of the Dragon Ball property. Granblue Fantasy: Versus is a spot-on example of how you take a mobile JRPG, and spin it into a fighting game.

Related reading: Arc System Works is also behind the BlazBlue series. Well worth playing. Our review of the most recent on PlayStation 4.

Granblue Fantasy has never formally been released in Australia and – as far as I’m aware – much of the rest of the world, but it is a monster of a property in its homeland in Japan. There, the gacha mechanics to unlock new characters is not as controversial, and players are generally more willing to spend money on mobile games, making it worth the effort to release and support them. Over time, Japan’s mobile RPG developers have adopted a nearly standardised approach which has proven to be highly successful, and Granblue Fantasy is right at the forefront of that; combining gorgeous character designs, simple but vibrant combat, and endless upgrade and unlock systems so that your characters and party are constantly but incrementally improving in power.

When it comes to the fighting game, Granblue Fantasy: Versus, Arc System Works has done everything that it can to capture all of the above within an entirely different genre. It remains utterly gorgeous, for a start. Arc System Works has always produced attractive games, but the level of detail that the team has managed to squeeze into each character and background in Versus is truly breathtaking. It would seem to have come at the expense of content, as Granblue Fantasy: Versus does have far fewer characters and backgrounds that most other fighting games, but quality over quantity, and this game really does deliver on quality. 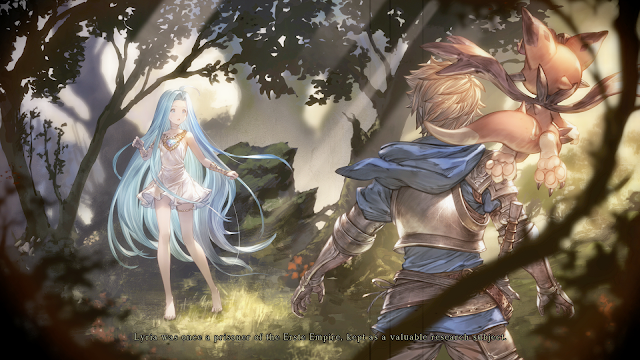 Every character feels completely different to play, and not just in the way that other fighting games have “reach,” “heavy,” “light” and similar archetypes that force players to play in roughly the same way for each character within that archetype. Instead, Versus’ roster includes an archer (who is absolutely hopeless in melee), characters that do a good job hitting opponents in the air, characters that rather enjoy fighting while in the air, heavy hitters, and the light & nimble – for just half the roster. Each character has a distinct and original combat style, and they’re all balanced out beautifully so that no match is an almost foregone conclusion before it has even started.

Of course, my favourite character is the blonde twintails woman, Zeta. She wears hotpants and spectacularly unhelpful corset armour, and she pulls it off with style. One of my great concerns going into Versus was the characters; as a spinoff game Versus was surely relying on players already being familiar with the characters from the mobile JRPG, but that’s obviously not going to be possible for those of us who haven’t had the opportunity to play the original. Thankfully the game dealt with that concern in two ways – firstly the little animated clips and quips of the characters before and after fights carry a great deal of personality and allowed me to confirm that twintails girl really is my favourite from the outset. She so sexy.

Secondly, Granblue Fantasy: Versus’ main mode is an “RPG mode”, and it works exactly the same way as in the mobile game. Before each battle there will be an extended clip of characters talking, and then the battle will happen. It won’t always be against another major character – those are saved for the “boss” battles – and battling goons or a horde of monsters gives the narrative a chance to flesh out the personalities of characters between major battles. While Granblue Fantasy doesn’t have the most spectacularly intelligent narrative ever committed to paper, what it does do remarkably effectively is establish characters, and then give each of them a chance to shine. Dare I say it’s almost like the mightiest of them all – the Fate series – in that regard, and Arc System Works has nailed that exact quality with the fighting game here. Finally, rounding out the ways in which the game so effectively parallels the mobile JRPG, after each battle you’ll get a pile of loot which you can use to upgrade equipment, just as you would in the mobile game. This structure ends up being the perfect way to introduce players to the world, stories, and characters of Granblue Fantasy, and Arc System Works deserves to be applauded for going as far as to make this game an introduction for newcomers, rather than a simple side-story for the existing faithful. 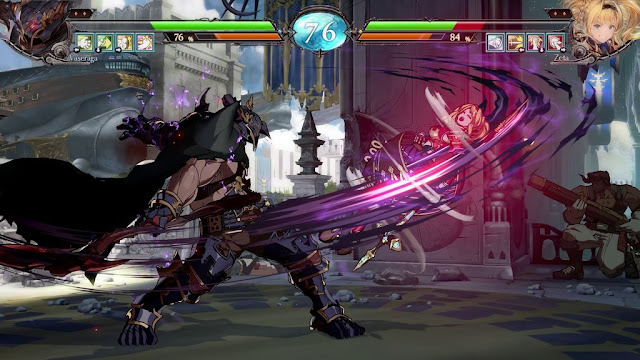 Versus also has the kind of combat system that will appeal to people who aren’t necessarily fighting game regulars, but love the art of Granblue Fantasy (or the mobile game itself). The combo system is nice and simple, and doesn’t require too many thumb rolls around the D-pad while standing on your head, telekinetically pressing buttons on a second controller and using your 7th, 8th and 9th fingers on your right hand to hit five face buttons simultaneously. In its place is something quite strategic – skills. Each character has four different skills which can be activated with a single button press and a direction on the D-pad, and each of those skills do different kinds of attacks, with a cooldown afterwards, which means they closely emulate the cool-down systems in place in most mobile JRPGs. Furthermore it’s possible to equip your character (in RPG mode) with additional skills to call on in a pinch. Brought together Versus feels less like an action combat system at times than it does the careful to-and-fro of an RPG system, only that you have direct (rather than menu-driven) control of the action.

I’m really not good at fighting games at all, but I do love them. To bring me a fighting game with a combat system that feels comfortable and familiar as a JRPG is like Arc System Works almost could have designed this game specifically for me. Button mashers won’t get far in multiplayer, and while I have no idea whether this game will resonate with the fighting game competitive scene (I will never understand those people), even if it doesn’t, Versus could be an incredibly effective “gateway drug” into the genre for people who are put off by long move lists and elitist “git gud” nonsense from half the community in this genre.

There’s a lot of room for Granblue Fantasy: Versus to grow from here. There are a lot more characters that can be brought into the game, and many more stories that can be told through that RPG mode. As it is, however, this is a remarkably beautiful and intelligently-structured fighting game, which does justice to the source material and offers a stunning foundation for what might come into the future. It also works as the perfect introduction to Granblue Fantasy for the west, and now Cygames should be left with no other choice than to release the mobile game worldwide.

Developer Q & A: On building a game for the purposes of meditation