Nintendo has announced it will host a Nintendo Direct focused entirely Animal Crossing: New Horizons. The game is set to launch for the Nintendo Switch on March 20, alongside a limited edition themed console, and fans have been searching far and wide for any clues to what will be included in the title. It’s safe to assume some of their questions will be answered during the Direct. 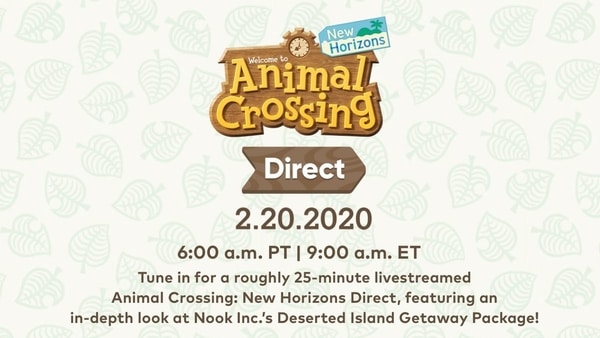 The Nintendo Direct will begin on February 21 at 1:00 AEDT, or for those in North America, February 20 at 9 a.m. EST. The broadcast will last just under half an hour and promises an in-depth look at Nook Inc’s Deserted Island Getaway Package.

A musically-charged adventure, Giraffe and Annika is now available on PC via Steam. Nintendo Switch, PlayStation 4, and Xbox One versions are planned for later this year. But let’s focus on the PC release (which includes English, Japanese, and Chinese languages) with a new trailer:

Annika is a bright-eyed girl with cat ears, and she works with Giraffe, a cat-boy with an old soul, to recover her memories. There’s a mange-style comic narrative, and you’ll help the pair collect star fragments hidden in dungeons. With each gem, Annika gains a new power, giving her access to previously-unreachable areas.

“Giraffe and Annika has been a passion project with rhythm sections inspired by Elite Beat Agents, which was in turn influenced by my team’s work on Osu! Tatakae! Ouendan!” states Atsushi Saito, sole developer at Atelier Mimina, via a press release. “Creating the adventures players will have with Annika has really been an adventure in itself. I hope players enjoy how her journey with Giraffe unfolds, punctuated by the rhythm boss fights, which were so much fun to make.”

Last Thursday, someone at Sony/PlayStation was thrilled to brag on the PS Blog that, despite not being at E3, Sony would have a presence at more local events this year. Specifically, there were over 20 titles promised to be playable at PAX East, including the Final Fantasy VII Remake and The Last of Us, Part II. Today, though, there’s been a major change of tune, as Sony pulls out of the conference altogether.

An update to the original blog post states: “Sony Interactive Entertainment made the decision to cancel its participation at PAX East in Boston this year due to increasing concerns related to COVID-19 (also known as ‘novel coronavirus’). We felt this was the safest option as the situation is changing daily. We are disappointed to cancel our participation in this event, but the health and safety of our global workforce is our highest concern.”

So here’s my question: why pull the plug on the entire thing instead of having a modified roster? Many of the games being presented are American-developed, or from other countries barely touched by the outbreak. Also, there’s a single case of COVID-19 in Massachusetts to date, 12 in the USA total. The odds are extremely low something would happen. And why now? Why not last week? Very little has changed.

There’s a new colour of Switch Lite on the way

I don’t have a Nintendo Switch yet, but when the Lite was announced I barely considered it an option. With this new coral colour, though, that might change, because it’s absolutely gorgeous. The colour variation launched in Japan on March 20 and in North America on April 3. There’s been to European launch date announced yet.

It will cost the same as the other versions of the Switch Lite, $199.99 USD. Pre-orders will open on March 7. It’s not lost on me that it seems to vibe well with Animal Crossing: New Horizon’s colour palette.

The coral-coloured Switch Lite joins the grey, yellow, and turquoise options already available. Best of all, it doesn’t appear to be a limited-time offer, it seems to be a permanent addition to the lineup.