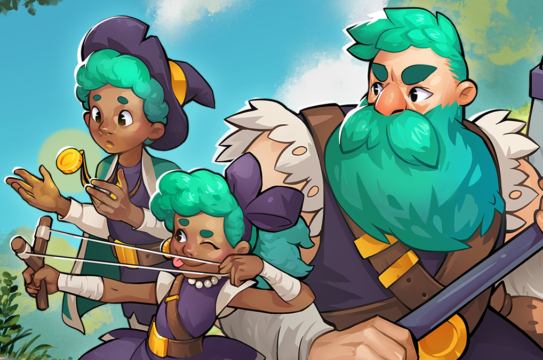 Wargroove is the spiritual successor to Advance Wars. Developed by Chucklefish, it successfully filled a void that Nintendo and Intelligent Systems had left by ignoring that series in preference to Fire Emblem, and was very warmly received by fans indeed.

Now is the perfect time to get into the game if you haven’t yet, as Chucklefish has announced free DLC for the PC, Nintendo Switch, and Xbox One versions of the game, to release on February 6 (with the PlayStation 4 update “coming soon”). This DLC is a substantial addition, giving players new units, heroes, and an all-new campaign to play through.

Grab a fellow ruffian, set up your Hideout and take on Wargroove: Double Trouble. Designed with co-op play in mind, this expansion adds a new story campaign that introduces Outlaw Commanders; the mighty Wulfar, troublemaker twins Errol and Orla, as well as the maleficent Vesper.

After an unexpected kidnapping and some severe ransom demands, your group of rogues have no choice but to perform the biggest heist that Aurania has ever seen – plundering riches from the Imperial Palace of Heavensong, Stone Mountain Fort of Felheim, the Celandine Vault of Cherrystone and the Floran’s Iron Roots reserves. But do you have the chops to get the job done?

It won’t be easy, but at least you’ll have two new units at your command – Thieves and Riflemen! Take tactical advantage of these new recruits, sending forth your Thief to ransack enemy gold and carefully position your Rifleman to take out enemy troops.

Wargroove was an already impossibly rich game, thanks to editor tools that allowed players to create entire campaigns and narrative arcs, and then share them online. It’s the kind of game that you effectively never have to stop playing, so to be adding even more to it… it’s impressive stuff indeed.

There’s also a trailer to go with the new news: