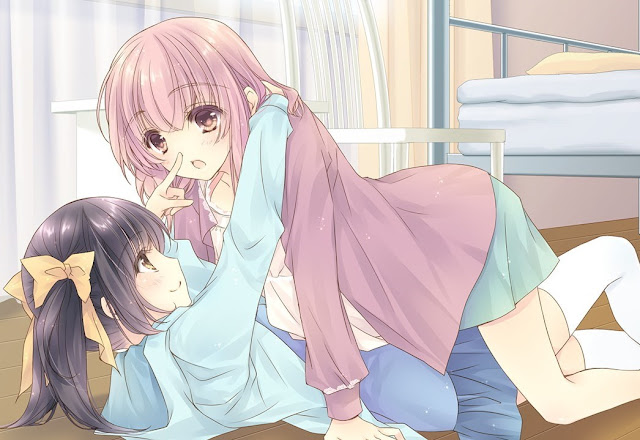 Visual novel developers often do like to subvert expectations. Unlike a straight-up novel, the visual novel medium allows for alternative routes and endings, and when you’ve got the option to write “bad” endings, the temptation to use them to ruin everything players had expected to get from the game to that point must be irresistible. Nurse Love Addiction is a really, really good example of that.

I believe my exact response to the first “bad” ending I had experienced was “what the actual hell?” In theory, Nurse Love Addiction is a beautiful love story about four girls who find themselves in the same class together, as first year students undertaking a nursing degree (with their young teacher thrown in there). You play as Asuka, a naive and rather juvenile airhead, who has never really understood what she wants to get out of life. You follow her deepening relationships with the other girls, with every chance that those can blossom into romance.

Drawn with a beautifully wistful, pastel-toned art style, and a graceful piano music score, the opening chapters of Nurse Love Addition are pure romance. As a video game, it was great to see yuri handled without the sleaze, too. This is a game that certainly has its sexy moments, but it was a convincing story of youthful love, by believable characters that were, in the background, struggling with school and other elements in their lives. Beautiful is the only way to describe it all, and while the game hinted at potential darkness down the track, it takes quite a while to get there, and even when those elements start showing up, you always assume that it’s just a bump on the road towards true romance and happiness. Because it’s just so convincing that that is what the game is about. 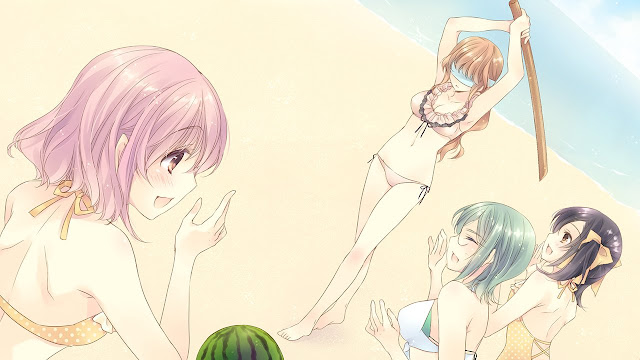 Then you’ll get to one of the bad endings, and you’ll immediately realise that the hazy, breezy, dreamlike tone of so much of the game is an elaborate ruse, and Nurse Love Addiction is, if anything, subversive in its entirety to the romance genre. I’m not going to give those endings away, but they are almost brutal in contrast, and really quite shocking. After playing one of those, your mind will then flit back to so many scenes where what was actually happening was a stark contrast to the romance trappings around it: there’s the scene where the girls are asked to practice peeing in hospital beds so that they can “understand what it’s like for patience,” – the romantic terms with which nursing is initially framed brought into sharp contrast with the reality.

Then there’s the obligatory scene in which one character trips over herself and falls on top of another – this is sexytimes by accident, and an anime tradition. Only here it’s framed in terms of one girl “pushing” the other down, and comes across as rather rape-y. Then there’s an entire arc in which one of the girls – Asuka’s sister, starts pulling her into increasingly intimate situations. In playing the game for the first time, you do gloss over all this stuff as somehow part of the overall romantic picture. It’s testament to the quality of the writing (and translation) that it’s just so subtle and elegantly worded that it just… fits with the picture that the game is providing players. It’s only when those “bad” endings start coming, and they’re so shocking, that you realise that Nurse Love Addiction was never interested in being a love story, but rather use the conventions of romance to criticise the artifice that is generally behind the genre, to attack the tricks that are used to was away the more unpleasant elements that are so commonly subtext to romance stories.

It’s also worth noting that there’s no indication on what are the canon endings. The “good” endings tend to support the romance, but in the context of the bad endings, it’s hard not to see those as a naive wistful dream-like scenario, where the “bad” endings represent something closer to reality. Regardless of your reading, it’s very difficult to subvert or criticise a genre by playing within it and without satirising it, and Nurse Love Addiction represents some of the sharpest, most subtle writing that I’ve come across within the visual novel medium. 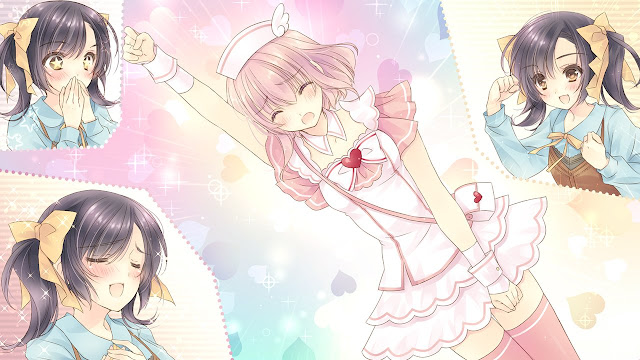 Part of the success is the characters themselves. Each are distinctive, fascinating characters that go through a major growth curve throughout the visual novel. Nurse Love Addiction is long by the standards of visual novel, and the limited number of characters works in its benefit there, as you get plenty of time with each and a intense look at them. The subplot behind the game is that of a coming of age story for each girl, and it’s hard not to become invested in their growth as the narrative pushes on. The other great strength in the game is the character art. Nurse Love Addiction doesn’t feature animated characters, but it does feature plenty of key art, and each character is a truly beautiful work of character design. The developers needed to get these right to lull you into that false impression of pure romance, and Nurse Love Addiction does that.

As a game, Nurse Love Addiction is primitive, even by the standards of its genre. Because it is so lengthy, tracking down all of the endings can be a surprisingly irritating process, as there are a fair few decisions that need to be made along the way. You can make use of the save files to shorten the process, of course, but other visual novels would give you a decision tree that you could jump into and move back and forth to try different “branches,” as you played. This one needed that. The music, too, is a little limited for a game of this one’s sheer length.

This stuff doesn’t really matter, though. Nurse Love Addition is subversive, intelligent, and quite beautiful. The Nintendo Switch has become quite the home for the VN, as we expected would be the case as the PlayStation Vita moved into legacy. These games are always a more natural fit for the handheld, and the Nintendo Switch’s gorgeously large screen really does this one justice.

There’s a free (and substantial) DLC update coming to Wargroove