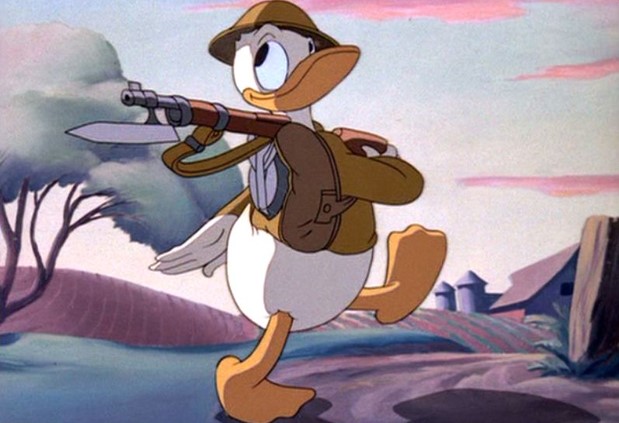 I’ve never forgiven Disney for what it did with Donald Duck. To call me a Donald Duck fanboy would be an understatement – my wife likes to joke that he even inspired my response to Things That Go Wrong (TM) – i.e I tend to go ballistic and look for a stick of dynamite as a solution. But through World War 2 Disney drafted Donald for propaganda purposes, and a significant chunk of the charming (albeit cranky) innocence of Donald was irreparably lost when I saw those for the first time, many years after discovering Donald for the first time.

Related reading: Why I can’t review the most recent Call of Duty

We now look at Disney and see largely simplistic entertainment, such as Star Wars, impossibly-profitable superhero movies, and children-friendly, feel-good musicals, but the reality was that Disney was a very active propagandist for the American military through World War 2.

America’s heritage of having its biggest entertainers run propaganda for it is about to become very pertinent to video games, because as horrific as it is to say, it’s no exaggeration to say that the world is on the cusp of either the biggest regional war since WW2, if not the outbreak of what will become World War 3. America is out there committing war crimes in a blatant, undisguised effort to bait Iran, and Iran is responding in kind. Unlike Iraq and Afghanistan, however, Iran is not a minor, friendless state that the rest of the world will just allow America to toy with. Should full-scale war break out, you can expect numerous regional – and potentially global – players to also get involved.


America has always been good at using its cultural products to motivate its population behind its large scale war efforts. Captain America was created to fight the Nazis well before he was busy taking on the relatively nonsense purple aliens. The first Captain America film was all about telling that exact story. Vietnam turned out to be a PR disaster for the Americans, but it wasn’t without the best efforts of luminaries such as John Wayne to cast the war in a righteous, commie-slapping crusade. Fast forward to today, and America’s shockingly effective effort to reframe the history books around that war to make it a story of goodies-and-baddies, with America cast as the “light in the darkness,” has led to flag-waving trash like Saving Private Ryan. It’s in America’s best interest to frame the war this way, no matter how false the narrative, because being the moral saviours of the world in the past would go a long way to justify the moral imperative and fundamental goodness of America’s actions of today. The scary thing is that, outside of a couple of outlier voices, most of this stuff goes unquestioned and American propaganda is rarely framed as such.

All of this is pertinent as background because what you are going to see over the next few years is more games about war in which people who are either Iranian (or suspiciously parallel to Iranian) are cast as the villains. Video games are a critically important popular culture medium, particularly with the younger generations, and America’s going to want (and need) recruits. Sure, it’ll have the pretense of nuance, much like there was just enough thrown into last year’s Call of Duty to allow the producers to wink at journalists as they repeated pre-approved talking points about subversion. For example: “there are a lot of similar themes about colonialism and about superpowers exerting their influence in regions through proxy allies and about militias that rise up and terrorist groups,” one said in an interview with The Guardian, ahead of release.

Then the game landed and we discovered that, for just one example, the developers had decided to attribute one of the most horrific war crimes in recent decades in the Middle East to the Russians. In reality it was committed by American forces. Subversive? Call of Duty was anything but. At a really (really) long stretch you could suggest that it is mildly critical of the idea of going to any lengths to “put down terrorists,” but then the game works so hard to convince you that, yes, you really should go to any length to put down those terrorists, and feel good about the choices you make along the way, no matter how much damage you cause or war crimes you commit.

So, with a wink and a nudge we’ll see military hero worship games about “liberating” or “fighting back against” Iran. Whether they’ll happen this year or not depends on how far along the writing is for this iteration of the respective properties, but if the conflict drags on, we’ll certainly see something about it in 2021. Some journalists will dismiss it as a concern, saying that it’s merely Activision or EA being “topical,” but then, the entire point of propaganda is that it is topical. Others will note the extreme violence of these games as somehow “proof” that they aren’t a celebration of war, but that too, is a reading that wildly misses the point. War propaganda doesn’t make the war itself look like fun. In fact, the more desperate and horrific it is, the better. War propaganda is about making the soldiers look heroic and patriotic in the face of abject horror. It’s about positioning the war effort as the light in the darkness, and causing a groundswell of pride in the community in what their heroes are sacrificing for their country.

The video game industry was already invested enough in games-as-propaganda, and that’s been through a period where the conflicts that America has been involved in have been relatively mild. Short of an 11th hour miracle, Iran will be the biggest conflict since the likes of Vietnam, and we’re going to see the games industry up the ante in kind, to do its bit to “support the soldiers” and war effort.

Propaganda is deceptive to its very core, and encourages a good-vs-evil view of the world that is such a distortion that it is dangerous. I won’t be a part of it, and certainly will not review anything that acts as propaganda this year, and I hope the rest of the media body looks at this stuff with a more critical eye, because after a century of popular media telling America (and the world) that Americans are righteous and morally inflatable, they just tried to start a large scale war through a war crime.

We have a release date for Disaster Report 4!