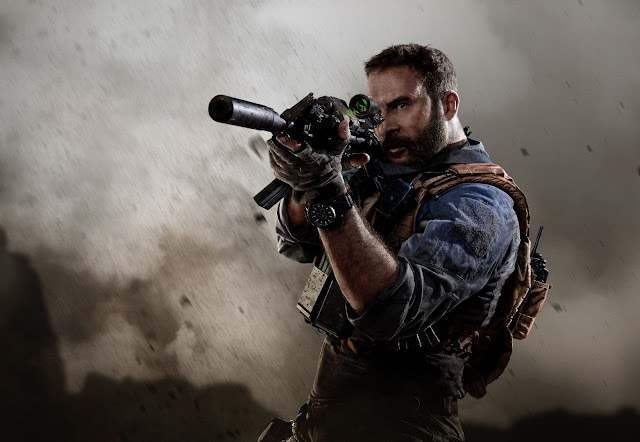 I cannot make myself play the recently-released Call of Duty: Modern Warfare any longer. And I cannot review it. It is a piece of jingoistic, military hero worship propaganda, and the way that it blatantly re-writes history in order to prop up an aggressively nationalistic perspective on the part of the Americans is unforgivable. This game is violently ideological, and it’s really quite offensive that so many other media outlets have either overlooked or forgiven it for that because it’s (apparently) fun.

For clarification, the game does play well enough. If you can get past its blatant propaganda, and sincere effort to use the video game medium to brainwash people into believing that American militancy is justifiable and heroic, then you’ll find that it’s entertaining enough to press buttons and kill virtual things. Multiplayer is there and whoo boy is it effective to commit war crimes and drop white phosphorous on your opponents. Single player offers the kind of mindnumbingly relentless pace that passes for entertainment in modern blockbusters, where quiet moments are kept to a minimum, because the writers are convinced that even a moment or two where things aren’t exploding or dying must be boring to the audience. But for what it is, as relentlessly unintelligent as it is, the game works. It plays nicely. It is, as far as I can tell, bug-free. It is the product of a well-oiled machine spitting out content for the sake of vapid, modern entertainment.

But it’s also crass populism. It’s the kind of thing that asks players to check their brains at the door, so the barrage of propaganda can fill their heads and convince them that the game’s key messages are legitimate. Call of Duty: Modern Warfare works so hard to convince you that western military action is always 1) justified, and 2) infallible. The key theme of this one is that “terrorism is evil, destructive, and takes many forms” (yeah, that took the creatives hours to come up with, I assume). It does this by re-writing American war crimes so that the Russians – who are nothing but juvenile caricatures of evil – are the ones that did them. Within the opening chapters of the game, there’s a terrorist attack on London, and in response to that, the “goodies” come together to decide than any response to this is acceptable if it stops the terror on them, and immediately thereafter your heroic American soldier dresses as a civilian (which is in breach of the Geneva convention), so that he – and his complicit Arab ally – can operate in secret. This includes committing further war crimes right up to acts of terrorism themselves.

At other times the game does everything it can to manipulate you into feeling a blanket hatred towards the Russians. They’re the only ones that commit crimes towards the civilian people (and historically, they are not the only ones that do that. Even in the context of modern conflict, the west simply does not have clean hands on this). The Americans and English soldiers, meanwhile, are consistently called on to protect civilians, which they naturally do with above-and-beyond heroism. Later on you get to play as a child, and the Russians will instantly kill you if they spot you. Because there’s nothing more villainous than people that would shoot a child. This game is a endless sequence of the cheapest emotional manipulations that simmer the entire nature of conflict to a child-like game of “goodies” vs “baddies.”

This is not new for Call of Duty – or EA’s rival military shooters, for that matter. I can’t remember which one (it might have been the World War 2 one), but one of the promotional videos for that one actually voiced the “we are light in the darkness” rhetoric that is just so patently untrue. None of America’s many, many wars have been clean like that rhetoric suggests. All of them have, however, relied on a complicit popular media to write the histories and “reality”, such that the mainstream don’t question the rhetoric. Disney was called on to use Donald Duck (and others) for literal war propaganda to help motivate the population behind America’s various wars. Now Activision is – whether with commercial kick-backs or not – doing exactly the same thing with its Call of Duty series.

What’s worse is that, until now, with this game, Activision has largely gotten away with it. When Activision characterised World War 2 as a “social space”, the pushback was limited and brief. Other media outlets – including supposedly progressive ones – have limited their concern about the depiction of war to how “diverse” the heroes are. As long as you have a strong woman and/or (but preferably “and”) person of colour in a leading role, it doesn’t matter how rousing the nationalist sentiment in your game is. You’re still okay with the bulk of the progressives, because here’s the sad reality: western education systems also promote a heavily re-written vision of history through the textbooks and classroom excursions. Regardless of the ideological persuasion of the individual, they’re encouraged from the youngest ages simply not to question the “official” line on what happened through these wars.

Activision overreached with Modern Warfare, choosing to depict conflict that is still fresh enough in people’s minds that the emotional manipulation and outright lies are immediately clear to anyone that even casually follows the news. But make no bones about it – Modern Warfare is no different for this series. It has always been nationalist and jingoistic. Sometimes it hides it behind wars that few people in the modern era properly understand. Sometimes if hides it behind science fiction and the pretense that it’s a “fantasy”. These attitudes are always there, though. Always.

Anyone who questions any of this is immediately hit with a barrage of “it’s just a game!” from those who can’t handle criticism of games beyond the superficial discussion on how much fun it is to hit buttons. I’ve seen it online as people have been pointing out just how revisionist Modern Warfare is. I expect this article will get a few too. No doubt some will be abusive enough that I have to delete them. Looking past the reality that if games are art (and they are), then “just a game” isn’t a defence, because they’re not “just games” at all, the entire point of propaganda is that it’s selling a fiction and fantasy. That’s exactly what propaganda aims to do. That’s why it’s so dangerous if it’s done well; it convinces that the fiction and fantasy are reality.

You may well understand that the jingoism and nationalism at the core of Call of Duty is nonsense to ignore. And you may well be able to enjoy it despite those elements. If that’s the case, then great. The problem is that the propaganda will influence others. It’s a kind of advertising, and you might be immune to it (or at least, think that you are), but just like Coke-Cola advertises precisely because it knows that, down the track, people will buy Coke because they have been conditioned to have an affinity to it, Call of Duty influences people. The next thing you know, an entire nation is actively celebrating the killing of one single terrorist as though it’s a great victory against the end boss, while absolutely none of the issues that lead to terrorism have been fixed and no one is “allowed” to be critical of any of this. That’s the culture Call of Duty is a key cog in facilitating, and until it stops working (and review scores this time around certainly haven’t punished Activision), it’s going to continue doing the exact same thing.

That’s why I just can’t review this game. There’s no way to contribute to the discussions that we need to have about this game through the limited scope of a review. I could give it 0/5. That’s certainly the score I think the game deserves. But if I do that people will dismiss the review without even reading it. If I were to try to discuss this in the context of giving the game a score in-line with other critics, people would misinterpret the criticism for a tacit support of the game. Neither approach works. And so, sadly, we can look forward to this all over again next year.