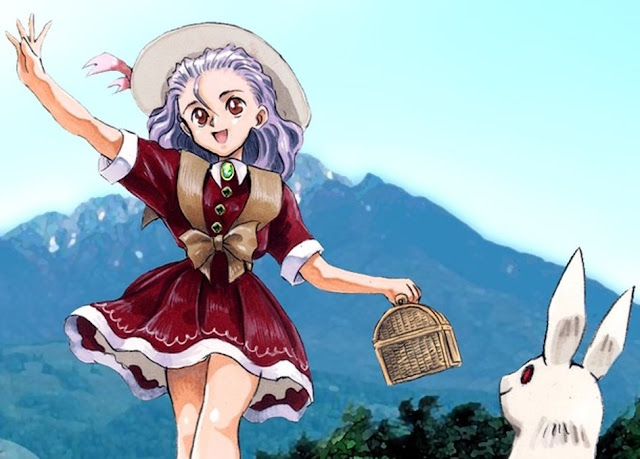 Princess Maker Go!Go! Princess is an odd thing to release in English. Really, really odd. It’s a board game spinoff of a series of life simulation titles that has had a really (really) marginal impact outside of Japan, and the series itself has been dormant everywhere for quite some time – the last new “proper” Princess Maker was released back in 2008. Go!Go! Princess is a simple board game and does rely on players having some familiarity with the series, but once you move past wondering why this game would be released in English at all, it’s actually a lot of fun.

There’s a single board to play on with Go!Go! Princess, and the action roughly approximates how the “proper” Princess Makers work. You pick from one of four different girls, and then set about developing her attributes (by reaching squares that allow her to study, train, etc), and completing missions for the king, which will earn a big pile of money and build the relationship between the girl and the prince. Those missions aren’t anything complex – you just need to reach a designated spot on the map before your rivals, and as soon as one mission is completed the next will be announced – but they keep you moving around the board. After a number of in-game “years” doing this (you can vary the number to change the length of a single game, with the longest option providing for 100 turns), you’re presented with a short story segment which shows the life your girl has wound up in, based on how you’ve developed her attributes. It’s entirely possible that she won’t end up being a princess, but in many cases that’s okay. As it turns out Go!Go! Princess isn’t really a competitive game so much as it is an abstraction of the coming of age process and finding your niche in life.

The only other element to deal with is the combat. Very rarely you’ll need to do battle with a monster that pops up, or sometimes you’ll land on the same square as another girl and can battle her, with the loser missing out on a turn. This combat system is exceedingly simple and involves nothing more than rolling dice, with the person that rolls higher doing damage to the other, but you can buy equipment and other items in shops to improve the damage you do, or your resilience to your opponent’s weapons. 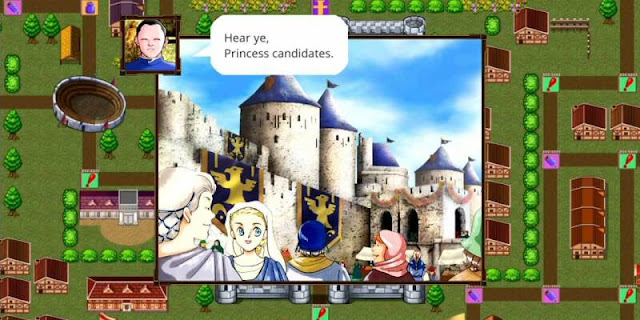 That’s basically all there is to Go!Go! Princess. There’s not much strategy involved, since all the characters are rushing after the same objectives, and most of the time there’s a single path to that objective. There’s no way to adjust the odds of landing on particular squares that you’re looking for – it’s all down to a dice roll – and I was immediately struck that the most accurate comparison to Go!Go! Princess would be Snakes & Ladders.

Then I realised that that’s just me staring at the game through a western lens. Go!Go! Princess really does share much more in common with a classic Japanese board game, called Sugoroku. Sogoroku depicts the journey across the Tokaido road of classical Japan, with a particular emphasis on delighting the player’s imaginations by evoking the sense of journey, sights, sounds and smells, which was so popularly depicted through uikyo-e prints of the time. That game, too, was a simple matter of rolling the dice and following the board, but the purpose behind it was quite profound. Go!Go! Princess’ board is so large that it clearly aims to evoke the same sense of journey, and coupled with the coming of age narrative that sits behind each character, the simplicity of the game comes across as cultural and charming, rather than something basic.

What lets the theme of the game down a little is the translation. Princess Maker Go!Go! isn’t broken by any means. It’s just that the localisation is too literal and therefore it a little too noticeable at times. Interactions are short and to the point and this isn’t meant to be a character-driven experience, but nonetheless you are meant to care about your character and her future and that’s hard to do when the text is pedestrian enough that you’ll be skipping through it without paying attention. At first I felt that the super-basic sprites and RPG Maker-like backgrounds on the board would also be a turn-off, but visually, Princess Maker Go!Go! becomes surprisingly charming as you play, with the board being broken up into distinct regions and very much looking like the kinds of Snakes & Ladders-like board games that inspired it, that aesthetic actually works to the game’s benefit. 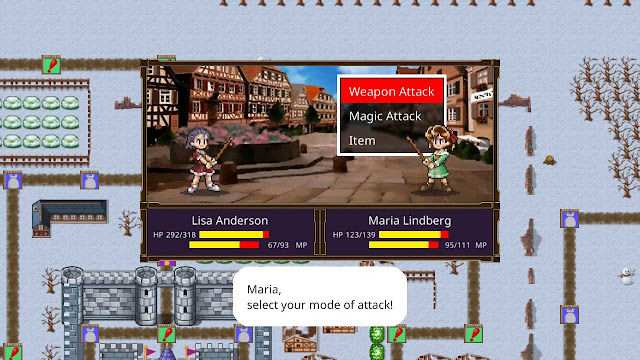 Another plus on the side of the presentation is the still art which will pop up at key moments and to announce the changing of seasons every couple of months. I’m not sure if they’re pulled directly from previous Princess Maker titles, having never played those, but they do have the “early era” VN look about them, and they are really gorgeous. There’s nothing too fanservicey here, just genuinely well drawn, well designed art of beautiful anime girls, fitting squarely in with the bishojo genre.

The only thing that gives away the amateurish foundations of Go!Go! Princess is the management elements. The idea behind the management side of things is good, though the execution is clumsy at times. There are a dozen attributes to manage, from personality qualities “pride” and “elegance” through to physical statistics such as “health” and “stress”. Different squares on the map and activities will build up these respective attributes (with a fee), and it’s these attributes that determine the kind of career your character will have at the end. The problem is a lack of guidance – it’s hard to prioritise developing one attribute or another when you’re never quite sure the impact of those decisions, and it’s hard to play one 100-turn game after another just to start learning how these things work. Giving players clearer goals would have helped this one along a great deal.

The band of people interested in Princess Maker Go!Go! Princess would have to be very narrow, but it does provide a sound board game experience, backed up with some lovely art and a charming theme. It’s also worth noting that the publisher is bringing one of the Princess Maker titles to Switch in English, and while I suspect they would have been better off reversing the order of these two releases, I imagine they will compliment one another very nicely. The Switch has proven to be impressively robust when it comes to digital board games, but the anime trappings of this one help it to stand apart.