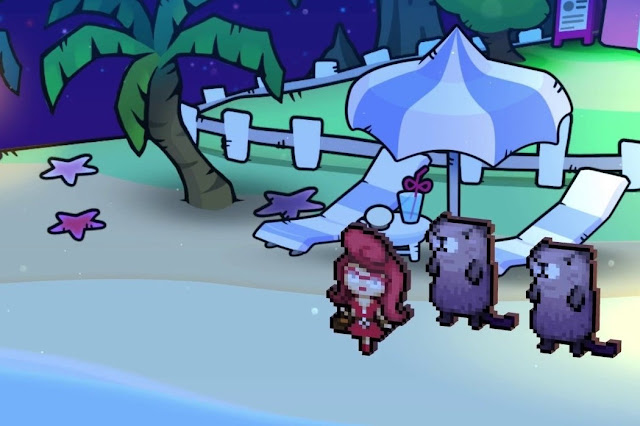 As a publisher, FuRyu has never been adverse to taking on projects that tackle some astoundingly complex, nuanced topics. The Caligula Effect was a deconstruction on supernormal stimulants and the potential for virtual existence. Lost Dimension took the prisoner’s dilemma questions of Danganronpa and ramped it up to 11. Now there’s Heroland, which is on the one hand as laugh out loud funny as you would expect from a game made by key creatives from Mother 3. On the other hand, it’s also a rather sharp and scathing criticism of capitalist systems, and as my corner of Australia has become genuinely unlivable, with air pollution from the smoke created by climate change-fueled bushfires reaching as much as 12x the maximum level to be safe, a bit of criticism thrown that way has been some welcome vindication indeed. I might not be able to breathe, but the team behind Heroland sure landed a gotcha.

Heroland is the name of the game, and also that of a theme park that the rich and powerful come to to live out their fantasies of being great heroes. They do that by getting a “party” together and then delving into the theme park’s “dungeons” where they fight a series of “enemies” (employees dressed up in mascot gear) while collecting “loot” (most frequently plushies of the defeated enemies). There’s more than a few layers to this, but for just two of the ways that Heroland immediately struck a chord with me:

1) It lays bare the way that the poorest are exploited to the wealthiest’s ultimate gain (and entertainment). Your protagonist effectively becomes a slave to Heroland when, while on probation, he “bumps” into another character, who drops a “million-dollar” vase, which he then needs to earn back by working for Heroland at a pittance. It becomes pretty clear early on what’s really going on when the protagonist discovers that another colleage also broke a million-dollar vase a week ago…


Anyhow, the protagonist quickly gains the attention of one of the wealthy patrons of Heroland, who decides to name him “Lucky” (as in, something that you might name a dog), and then spends much of the rest of the time ordering “Lucky” about… if not outright tormenting him. “Lucky’s” role in Heroland is to be exclusively focused on making sure the wealthy patrons have a good time, no matter what the personal cost is, and naturally none of the wealthy show the slightest bit of interest in “Lucky”, beyond his value as a resource to their entertainment.

2) Heroland also shows just how trivial the world is to the wealthy. Heroland’s dungeons are in fact modeled after adventures that actual heroes when on when they quested to defeat an actual Dark Lord. Throughout the adventure there are indications on just how challenging and deadly that adventure was, and yet that’s all papered over, because the wealthy want to have their fun in an uncomplicated, non-challenging environment.

The parallels here to the real world are clear. In an era where humanity’s collective wealth is unprecedented (however concentrated it is), much of everything has been spun into the expectation of unchallenging entertainment. Films become increasingly vapid and hyper-kinetic, and games… well, I can just tell that there’s going to be some complaints from people who have read this review so far that I’m “politcising video games”. Stories have always been about conveying meaning and learnings, whether that be the morality themes of Aesop through Grimm or the more theoretical and philosophical musings of Kubrick, Shakespeare, or Dali. The hubris that modern luxury has afforded our societies is in the process of re-evaluating storytelling, shifting it from a way to share meaning to a way to exploit the base content to provide passive fun. Heroland depicts and satirises what happens when the importance of storytelling is allowed to erode like that. 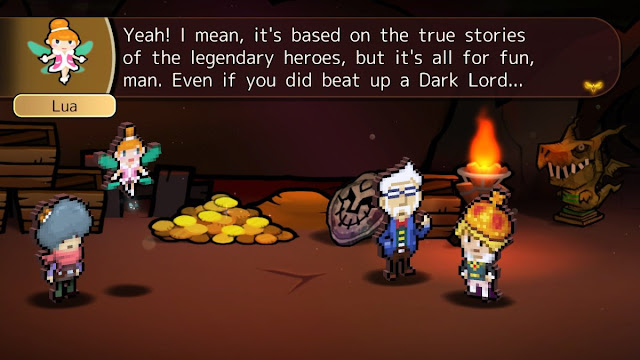 These are just the two principle themes that stuck out to me as I played Heroland, though like any good satire it’s so layered that there are any number of readings or takeaways that a player can have from it. Or you can kick back and simply enjoy the ridiculous characters and puns. Also like any good satire Heroland is sharp without being preachy, and while it wants to challenge you, it’s not going to be an inaccessible experience if you don’t want to think on it.

There’s a lot to love about the game on every other level, beyond its core narrative notes. Visually, it offers a brilliant re-working of the classic 2D sprite look. They’re 3D character models, but they’re flattened, like they were cut from cardboard. They’re also rather limited in terms of expression in movement, in keeping with the retro aesthetic, but their ability to jump around and move in a 3D space gives them a decided modern twist. Each character brims with personality (and there are a lot of them), and the visual vibrancy and energy helps to sustain the charm of the game right the way through.

It’s just as well that it has Heroland does have such great a sense of humour and aesthetics, because the gameplay, while entertaining enough, is rather flat (pardon the pun). As mentioned before, your role is to ensure that the patrons have a good time in Heroland’s “dungeons”, and you do that by staying out of combat (you don’t want to steal their glory, after all), and offering advice from the sidelines. You can advise one character in the party on each of your “turns,” you can give the whole party an instruction (“go all out on attack!”, “defend”, etc), or you can use healing or other beneficial items to bolster the party. The group of “heroes” will otherwise go about their own thing, and combat plays out in real time, meaning that you need to wait for an ATB-like bar to fill before you’ll get your next opportunity to jump in and do something. 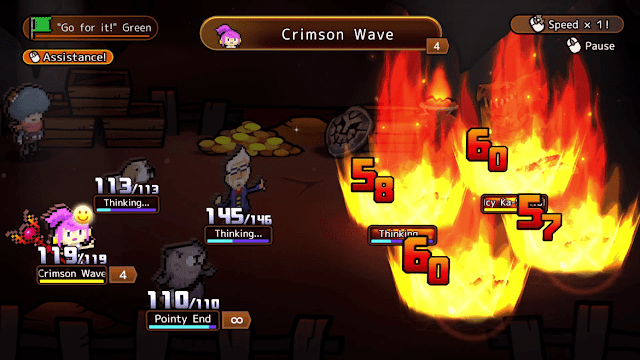 This combat system does support the game’s themes perfectly, but it also involves a fair amount of waiting around and tensely hoping that your characters will do the right things while you’re on downtime. Each character takes a limited number of “special abilities” into a dungeon and tends to use them at inopportune moments (“bad AI”, or a reflection on the true idiocy and hubris of most of these characters?). Furthermore, some special attacks are tied to quality equipment, and if used too often in the dungeon, can cause those weapons to break. They tend to be expensive, too, and it’s immensely frustrating to have the AI cost you that kind of money by behaving like dolts… however fitting it is to the narrative.

The other issue Heroland struggles with is the grind. Almost immediately you’re going to need to do “optional” side quests and replay old adventures just to keep up with the minimum “recommended” level for the story quests. When you’re just out of the tutorial and already grinding away at level four because the next story level “suggests” that you be level five, you quickly realise that the overall game is going to be one long haul. I would suggest that this is somewhat counter-intuitive to the rest of the Heroland’s context, since satire gets lost a bit when jokes are replayed and too far apart… but on the other hand I was still chuckling at the nonsense that was going on in some of those side quests many, many levels in. Heroland is just that well written.

It’s tough to create good satire, particularly when it has socio-cultural undertones, but Heroland not only succeeded, it exceeded the wildest expectations I had on initial impressions. Furthermore, within the robust, witty, and consistently hilarious script sits a game that’s a bit grindy, but one that doesn’t stop being great fun to play throughout. FuRyu continues to establish itself as a publisher with a knack for finding the most interesting and creative games.