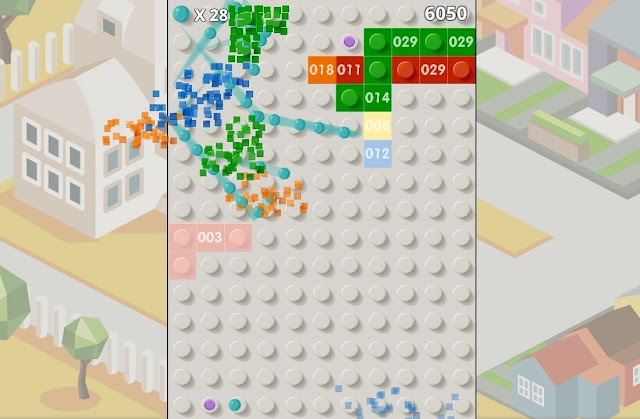 Amazing Brick Breaker is shovelware, just so we’re clear here. This is a game with no fresh ideas, it’s not presented in a way that could be called “interesting”, and it probably took around a month to make. But on the other hand it works and does what it promises to so… frankly there are far worse games out there than this one.

Amazing Brick Breaker is basically Breakout, but without the paddle, and with a Puzzle Bobble shooting mechanic instead. You start out with a single ball, which you aim up the screen and launch at bricks that are descending downwards. Each brick has a number on it, and it needs to be hit by a ball that many times to disappear. So a brick with a “1” on it only needs to be hit once, while one with “32” would need to be hit 32 times. The ball you launch will continue to bounce around off walls and bricks until it descends back to the ground level, and then you take aim and launch again. It’s game over when any of the bricks get to the bottom.

The one other mechanic that you need to be aware of is that, in addition to the bricks, you’ll sometimes be able to pick up additional balls, which also move down the playfield with the bricks. So, while you’ll start with one ball, after a couple of minutes play you’ll be shooting a dozen or more with each shot. You’ll need to collect a lot of these balls in order to deal with the high numbers on some of the bricks that start appearing, and you’ll need to be clever with your shots so that that each ball bounces off a couple of bricks with each shot. 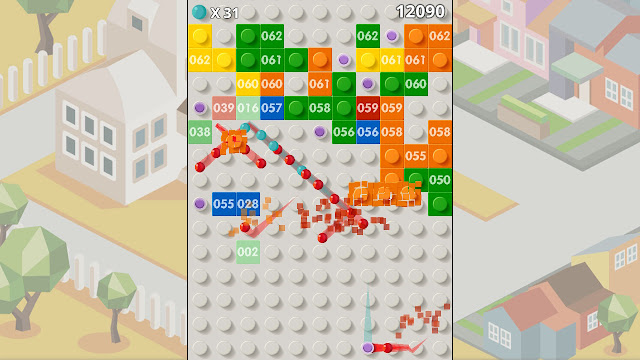 That is the entirety of the Amazing Brick Breaker experience. The physics work fine, allowing you the kind of predictable, reliable bounces that you’ll need to tactically plan out big shots to clear out a lot of bricks. The bricks themselves are bright and colourful, giving the game a pleasant aesthetic. For some reason in the background there’s a little 3D animation of a blocky car driving around, but it’s fine for what it is. With no power-ups, challenge levels, or even an online leaderboard, there’s not a great deal of longevity to Amazing Brick Breaker, even if you’re the kind of person that enjoys these hyper-casual puzzle games. Given that the Switch has no shortage of casual puzzlers, ranging from the charming Nameko match-3 through to the brilliant party fun of Disney Tsum Tsum Festival, I can’t imagine there’s a huge audience for Amazing Brick Breaker, but, again, this game does in fact work.

The only other mode is a “Vs. Mode”, which allows two people (local only) to compete against one another to be the last one standing. It plays exactly the same way as the main game, but with the added bonus that every so often you’ll clear enough bricks to drop some extra lines of bricks on your opponent. I can’t see this replacing Smash Bros. or Mario Kart as the go-to for multiplayer action on the Switch, but some people might get a passing kick out of it.

So perhaps the “Amazing” in the title isn’t really warranted, but it has to be emphasised: there’s nothing actually wrong with Amazing Brick Breaker. It works, and if you’re going to buy it, then you’re going to get exactly what you’re buying. Most importantly of all, though, this is one of those rare games where I don’t feel somehow guilty if I can’t get to 1,000 words in my review. It really is a relief to be able to go lazy on reviews occasionally, and this one really doesn’t warrant anything but a quick footnote on what we usually cover on DDNet.