Originally launched for PC and Nintendo Switch late last year, with an iOS launch this past August, Gris is finally set to come to PlayStation 4 on November 26. It will be available digitally, with Limited Run Games publishing physical copies (pre-orders are open now). Here’s the launch trailer:

Gris is best described as a watercolour platformer, free of danger, frustration, or death. It promises a serene and evocative experience as players explore the world made of delicate art and detailed animation. There are light puzzles, platforming sequences, and optional challenges.

The game follows a young girl named Gris, lost in her own world where she is dealing with a painful life experience. Her sorrow is manifested in her dress, which gives her new abilities to help explore her reality.

From developer Gust and publisher Koei Tecmo, based on the manga and anime, Fairy Tail is on many people’s watch list. It follows the story from the Tenrou Island arc through the Tartaros arc, and also includes new episodes. The game involves Natsu and the team fighting to become the top-rankled guild in Fiore. The game is set to launch next spring for Nintendo Switch, PC, and PlayStation 4. Let’s start with some information about the battle systems:

The battlefield is a 3×3 grid. Battle parties can have up to five mages – yes, FIVE mages! – to allow for impressive magical attacks. Some mages have special attacks; for example, Dragon Slayers can use Dragon Force. Natsu’s infamous move, Lightning Fire Dragon’s Iron Fist, is also one of these abilities. Dealing damage fills up the Fairy Gauge, which allows for a magic chain attack. When your party has taken heart damage, characters awake new abilities for a few turns to drastically increase their powers.

There are five new characters that have been added to the roster, not from Fairy Tail but from rival guilds in Fiore. They are the ‘Sky God Slayer’ Sherria Blendy from Lamia Scale, the ‘Strongest Fencer’ Kagura Mikazuchi from Mermaid Heel, the ‘Handsome’ Blue Pegasus mage Ichiya Vandalay Kotobuki, and the ‘White Dragon’ Sting Eucliffe and ‘Shadow Dragon’ Rogue Cheney from Sabertooth.

A board game-style experience, Billion Road is set to come to Western PCs and Switches thanks to publisher Acttil. The game was originally released for the Nintendo Switch in Japan about a year ago, published by Bandai Namco (hence the below screen tagged with its name). 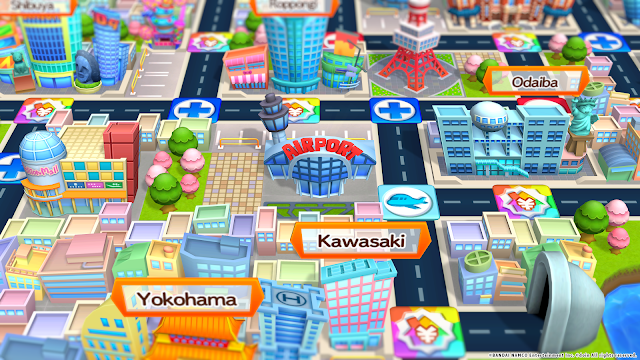 Billion Road brings you through real-life prefectures and cities through Japan, with the goal of being the richest player when you get to your final destination. You want to buy all the businesses, landmarks, etc. that come up for sale. Oh, and don’t forget the little monsters that appear to either help or hinder your progress.

Tournament Mode is where you’ll want to be for single-player action that lasts 30 in-game years. The game has multiplayer, of course. Skirmish Mode lasts only three years. Four people can play on one Switch with a single Joy-Con, or you can play online via Steam.

Princess Maker: Go! Go! Princess is a spin-off of the main Princess Maker series, featuring three characters from previous games on one original character. It’s a board game where you take on the role of one of the girls. The title has been remastered and updated from top to bottom. The Nintendo Switch version has multiplayer via the Joy-Cons, whereas the PC version supports online multiplayer.

The second title being released for Nintendo Switch is Princess Maker: Faery Tales Come True. There is currently no release date set. It first launch for PlayStation in 1997, with an updated PC version released through Steam in June 2017. Most commonly known as Princess Maker 3, the game follows a young fairy girl wishing to become human. The player cares for the little girl and raises her as their own.