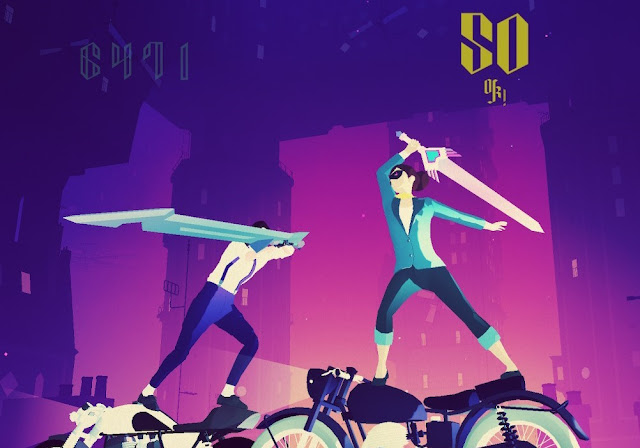 Simogo’s Sayonara Wild Hearts is a game which I can’t stop thinking about. On the surface it’s simple enough to enjoy – a music-based arcade game with pared-back mechanics suited well to short bursts, a dazzling graphic style of pinks and purples and a swathe of bombastic set-piece moments. It’s a short game which is immediately enjoyable. But the reason why it’s lingered in my memory so often is down to something deeper, which surely comes from Simogo’s design ethos.

This is the studio which gave us Year Walk and Device 6, and which proudly proclaims that it’s not even sure if what it develops can be effectively called a “game”. It’s from this outsider position that it is able to constantly make titles which challenge players’ perceptions of play and open up the possibilities for new genres and new experiences.

Sayonara Wild Hearts is a music game with arcade influences, but it’s much greater than the sum of its parts. It manages to reinvigorate the act of play and the act of listening to music, and ties it all together with a focused, effective narrative as well. It’s a game brimming with design choices which are delightfully clever. Here’s why I hope everyone will pay attention, because the giddy feeling I get from playing this game is definitely not going away any time soon. 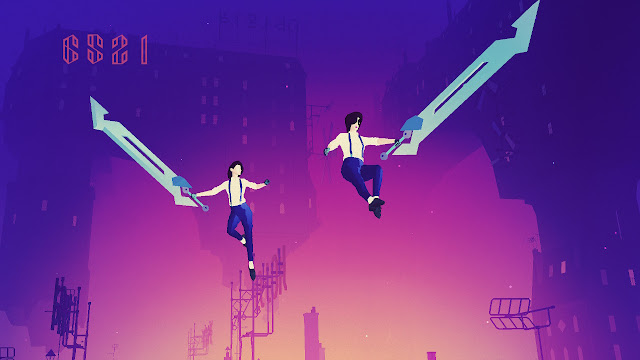 Mechanically, Sayonara Wild Hearts curbs a great deal of influence from the Sega Saturn and Dreamcast era. Many comparisons have already been made to Rez, the lucent, vibrating 3D shooter touted by its fans as more of a religious experience than just an action title. It’s likely not a coincidence that Simogo went for this era of games design – from a catalogue of games that had style overflowing from the screen. There’s pedigree in Sayonara Wild Hearts from Rez, Space Channel 5, Sonic Adventure, Jet Set Radio, Shenmue, NiGHTS Into Dreams and more.

And, for one moment of negativity – Sonic Adventure is a bad game. It’s a too-fast on-rails 3D platformer where sometimes you need to hold a direction key in order to not die, and other times you need to not hold a direction key in order to not die; and with telegraphing too brief for human reaction speed. Sayonara Wild Hearts cribs these mechanics wholesale – strafing left and right on the motorbike and skateboard levels to splash through lines and patterns of hearts (not rings this time) feels very Sonic-Adventure. But while my problem with Sega’s foray into 3D hedgehoggery was that these clunky game mechanics got in the way of the ambitious non-linear narrative, Sayonara Wild Hearts uses these obtrusive designs to further its own aesthetic. Because at its heart, Sayonara Wild Hearts wants to make you feel like you are playing a game. The act of play in a digital space is at the core of the experience.

Many of the hallmarks of gaming which have by recent trends been on their way out – things like scores, collectibles, level-select screens and post-level rankings – appear prominently in Sayonara Wild Hearts. And to consider Sayonara as a rhythm game it makes a lot of sense for these to appear; but to consider its role as a narrative/emotional experience, which is what I would argue this game is trying to be, the addition of these very game-y elements feels like an anomaly. We wouldn’t expect a scoring system in Dear Esther or Florence, for example. So I’m fascinated by the way Simogo’s inclusion of these arcade-y mechanics contributes effectively to their narrative ends. 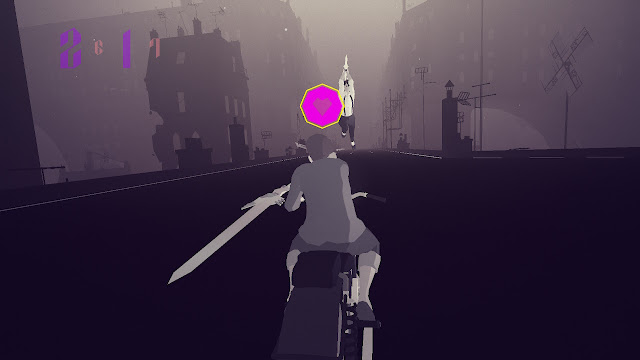 There’s a primal rush of dopamine which comes with every score boost, every pickup collected and every time Queen Latifah says “gold rank”. This is a potent cocktail when combined with the striking neon visual style and pulsing electronic soundtrack: much has been said about game-feel in the past but Simogo elevates it to an art form with Sayonara Wild Hearts. Even though the mechanics of the game might not be the best, and they have neither the depth or reliability to hold up the experience on their own, they are the cornerstone to Sayonara Wild Hearts’ jubilant tone. The result is a game which feels amazing in the player’s hands.

From Passive to Active

Simogo bills its game as a “pop album” and to me this is an apt description. The music in Sayonara Wild Hearts is of paramount importance; the game would be a hollow shell without it. The game is broken up into a number of shorter tracks but with a full runtime of about 50 minutes – the same length as an album – and players can unlock the option to play through the entire game without breaks. I wouldn’t categorise it as a traditional rhythm game: it’s not a skill tester of rhythm or song pattern recognition, but rather a way of enjoying music in an active way.

We’ve experienced a subtle cultural shift in the 21st Century with the advent of Spotify and iPods in the role music plays in our society. See, up to around the 1970’s, music was an active experience. Music was sought out – you went to concerts, you bought a record, you chose to listen to music. The act of sitting and listening to a record player or live performance was one where the listener has an active role: they are deciphering the stylistic choices made by the musician and enjoying the medium through discourse. 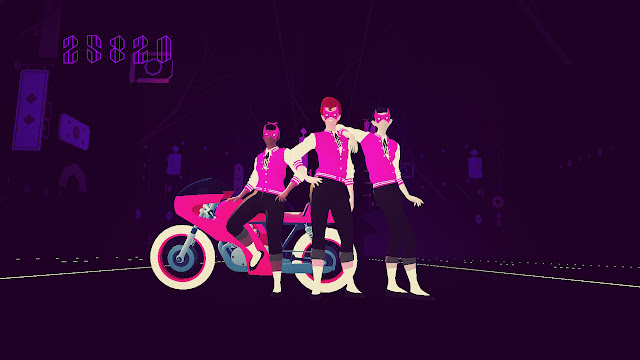 But now we tend to see music passively – in that we don’t participate in it. We listen to music in the background as we do other things. And we choose to let that music wash over us and affect us, without sitting down and unpacking what the music is really about. That’s why we make playlists based on moods and situations, rather than consider the actual intent, meaning and effect of an individual song. That’s why we can fall so in love with songs that have nonsense lyrics or are just the same repackaged beats over and over – yes they fall apart under scrutiny but we don’t scrutinise them; we treat their agreeableness as their strength.

One genre where this, at least personally, feels grating is electronic and dance. Listening to a dance album passively just feels wrong, or at the very least, it’s a lesser experience than listening to it in a concert or party setting. There is something about moving to the rhythm in community with others which is an integral part of listening to dance music. In its most accomplished moments, Sayonara Wild Hearts comes close to the otherworldly euphoria of a masterful electronic set. And this is all due to the repositioning of the listener into an active role.

Most rhythm games can run into the issue of the visuals and the song being a distraction to the test of dexterity that the player is really there for. I love rhythm games (DJMax is my current favourite), but I can understand the reason why advanced players turn the visualisations off and memorise the beatmap pattern itself rather than the nuances of the musical composition. By being an easier experience, an illusion of danger and tension rather than an actual strict test of skill, Sayonara Wild Hearts is able to more effectively merge the experience of playing a game and listening to music. 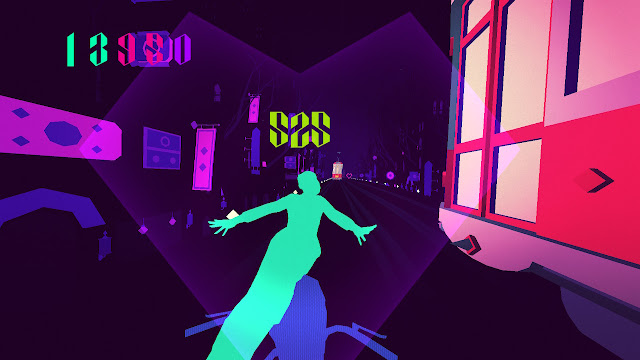 Ultimately, playing Sayonara Wild Hearts feels like the logical extension of listening to a pop album – it adds on the “something missing” which is noticeable when listening to a dance album on your own. It mimics the euphoria of being in the crowd at a concert, experiencing the performance in a deeper connection than just through what you hear. The visuals and gameplay mechanics aid the music on a sensory assault, to deliver an experience which I can’t get enough of.

Putting it all Together

Now that the game manages to craft a potent emotional experience through its use of music and gameplay, Simogo directs this energy towards a personal and affecting story as well. The premise of Sayonara Wild Hearts is that the protagonist needs to reconstruct herself after a heartbreak, learning to overcome the struggles she faces while battling through a surreal, colourful landscape.

It’s a little disheartening that some reviewers have labelled Sayonara Wild Hearts’s narrative as weird or incomprehensible – although it does dabble in dreams and the abstract, the chosen symbols are clear and easily recognisable, and with a bit of afterthought it’s clear to see what Simogo is going for. I love that the narrative is ultimately a positive, restorative one, and it uses these easily recognisable symbols to effectively present the narrative as more relatable and universal. For those who have gone through heartbreak, it’s easy to understand the journey which the protagonist goes through, and to find some meaning in the enemies she faces. 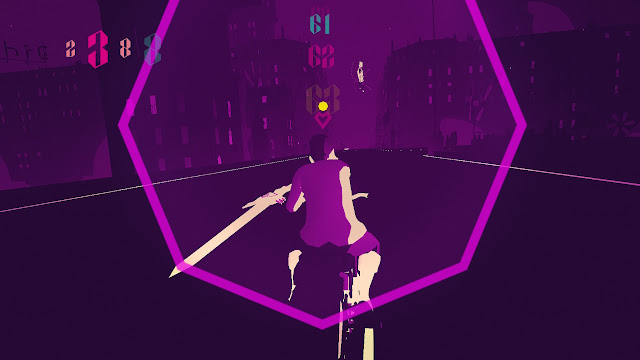 The narrative is more of a meditative thematic exploration than it is a traditional plot and sequence of events. Just like a pop album, in which each track contributes a few additional ideas to a unifying through-line, Sayonara Wild Hearts encourages the player to participate and create meaning out of what they see. Again, it takes the act of listening to music and makes it active: the lyrics, rhythms and tone of the game’s tracks mingle with the gameplay elements to keep players engaged with the narrative’s core ideas. It is a game of pillars which support each other, and it’s admirable how laser-focused Simogo’s vision manages to be.

I can acknowledge the game’s shortcomings as growing pains for what I hope will be a new subgenre of music games – the occasional dud level hardly blemishes the significance of the whole game, just as one bland track doesn’t hold back an otherwise brilliant album. I can only imagine electronic bands like Chvurches, Purity Ring or Odesza kicking themselves for not being the first to make something of this calibre – (notably the former two lent their music to the rhythm game Loud on Planet X, which unifies gameplay with music in a more pedestrian manner). Sayonara Wild Hearts is the kind of game which opens my eyes to new possibilities that games can provide, and I’m desperately awaiting this style of design to properly take off.