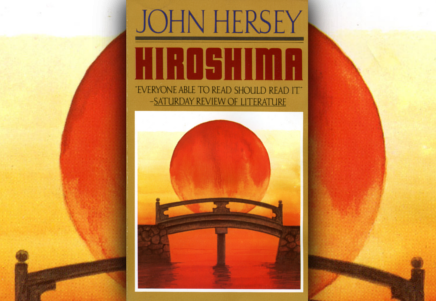 “The hurt ones were quiet; no one wept, much less screamed in pain; no one complained; none of the many who died did so noisily; not even the children cried; very few people even spoke. And when Father Kleinsorge gave water to some whose faces had been almost blotted out by the flash burns, they took their share and then raised themselves a little and bowed to him, in thanks.”

This year I took my first trip to Hiroshima, as part of the holiday that I attach to my annual pilgrimage to Tokyo Game Show. This was a city that had long been on my bucket list (and as an aside, it doesn’t disappoint on any level), and you can’t go to Hiroshima without also going to the Peace Memorial, park, and museum. To be clear – this part of Hiroshima is not a pleasant trip. The museum, with its accounts of what happened on the day the nuclear bomb was dropped on the city, are particularly harrowing and shook me to my core. But, just as I firmly believe that people should put themselves through a trip to Auschwitz if they can, to feel the gravity of what really went on there, so too should people understand the full weight of what nuclear bombs signify. The world has a habit of abstracting both of these moments of pure horror in the way they talk about them in everyday conversation, and that’s dangerous, for reasons I will get into shortly.

While I was in the museum store, I saw copies of Hiroshima, John Hersey’s slim volume that shared with the world the stories of a handful of survivors of the nuclear bomb, and what happened to them immediately afterward. It’s a book that has been around for many years now. First published back in 1946, just the year after the bomb landed on Hiroshima, it’s a crystal-clear account of the tragedy, told from the perspective of those that experienced it, while it was still fresh in their memories. As a book, it’s valuable as a piece of writing. Hersey is one of the most important journalists in history, and pioneered the New Journalism movement, whereby journalism would be written using a narrative fiction approach to be more approachable for the reader. Beyond it being a pioneering piece of writing, though, Hiroshima is so important because the story it shares the full weight of the real horror of a nuclear bomb.

Beyond an abstract sense of nuclear bombs having the power to destroy the world, it’s hard to shake the feeling that society’s understanding of these weapons have greatly diluted over time. This is for two principle reasons. Firstly, Japan lost the war, and America has subsequently written the history books to suggest that the nuclear bombs were justified (they weren’t), and they were the right thing to do (they targeted civilian populations and were therefore a war crime). The mainstream American view, because of the distorted history that subsequent generations have had drummed into them, is that those deaths were inconsequential as they meant the war ended (a flat lie, as the Japanese leadership was already preparing to surrender). In reality America specifically chose to drop a nuclear bomb on a city which had geography that was ideal for causing the greatest possible damage, and they wanted an excuse to do so before the war, which they knew was drawing to a close, ended. They wanted a live test to demonstrate their complete military dominance to the world. It was a pre-Cold War play, and it came at the expense of 140,000 or so lives, of which only 20,000 were military.

The second reason that we tend to think about nuclear bombs in the abstract is that they haven’t been deployed since World War 2, and as the survivors of Hiroshima have died, and the city itself has recovered to become one of the most beautiful in Japan, people’s memories of the real impact of these bombs has faded. Nuclear bombs are now a nasty in the same sense that a massive asteroid is, or perhaps a catastrophic super-bug killer virus. Something we all think of as a remote possibility at best. Modern day storytellers make horror films about zombie outbreaks. Not nuclear devastation. It’s no longer something we relate to. Stories of vaporised people leaving nothing but a black patch where they were sitting when the bomb exploded, or burns so bad that their skin sloughs off when someone tries to pick them up and move them somewhere safer, are no longer stories we think about when we think about nuclear weapons. The way that the radioactive ash of Hiroshima mixed with the water and caused it to rain black in the hours after the explosion, which desperately thirsty, sick and dying people drank out of desperation, only for it to make their condition worse, is a vividly horrific image, but not something that many of us even know happened. I know I didn’t until I visited the museum. These are all stories that make the true horror of nuclear weapons clear, but those stories are so far past current memory that no one’s telling them any more. This is where texts like Hershey’s book is so important. It pulls us out of an abstract way of thinking about the bombs, and put us in a position to empathise with the victims. It tells the real stories of nuclear warfare. Not the infantile science fiction modern rhetoric we get today.

You only need to look at how the developers of Fallout whatever-one got up on stage at E3 this year to oh-so-proudly proclaim that with Fallout you’ll now be able to drop nukes on your opponents. They did this to rapturous applause as people cheered on a pathetically juvenile interpretation that a nuclear bomb is simply a Really Powerful Thing without the slightest hint that any of them understand the implications of nuclear weaponry. It’s the same reason that juvenile-in-chief, Donald Trump, has twice now explicitly threatened to drop nuclear bombs on nations; first he threatened North Korea in the most infantile way imaginable, a “my-manhood-is-bigger-than-yours” tweet. Just last week (in fact, the very same day I was being horrified with what I saw in the Hiroshima museum) he decided that it was Iran’s turn to have a nuclear threat directed at it. In both cases Trump’s statements are clearly examples of a mentally incompetent fool flexing muscle, but it just goes to show how little people comprehend just how horrific these weapons would be if deployed today, and just how hurtful and cruel they really are.

To put in context; around 60 per cent of Hiroshima’s population was killed by the bomb. Today’s bombs are far more powerful than the one dropped on Hiroshima, but to use that same number for convenience, in Pyongyang, the capital of North Korea, a similarly-effective attack would kill 1.92 million people. Tehran, the capital of Iran, would lose 5.22 million people. Putting aside the global implications of that, even if the impact of these hypothetical bombs was contained to just that death count, Donald Trump has actively threatened over seven million people with nightmarish death: instant vaporisation, to the point that surviving family members try and guess if a black mark is all that remains of their loved ones, or burns so bad that the victims remaining hours are in extreme agony as their skin melts off their bodies, right through slow deaths through cancer for anyone lucky to be on the outskirts of the initial explosion. And these are civilians that Trump is threatening. The military is not the target of a nuclear strike.

This is all something that few people have bothered to pick up on. Trump’s threats are nothing but abstract musings, as far as the media’s concerned. No one reported that Trump directly and explicitly threatened over five million Iranian civilians last week. Even those in opposition to Trump simply roll their eyes at the banal idiocy of these comments. And they’re the good ones. Others actually cheer on this strongman nastiness, because to them a nuclear bomb is just a big boom boom proof of how great and powerful America is.

People need to read John Hersey’s Hiroshima. The Japanese are genuinely concerned that the world is forgetting the realities of nuclear weapons, and after the direct contrast that I observed last week – the stories of the Hiroshima museum contrasted with Donald Trump’s glee that he has a nuclear button – I’ve got to say those fears are entirely justified. People clearly need a proper reminder of what’s at stake here. Especially anyone who thinks about nuclear bombs like those at Bethesda or Trump’s cheer camp do. It’s probably a bit much to expect Donald Trump to read a book, but nuclear bombs aren’t a vague promise of “the end of the world,” no more relevant to us than the biblical Book of Revelations. To even suggest the use of a nuclear bomb in terms of anything but complete, abject horror, is a grossly immature cruelty, and it needs to stop. Hersey’s classic will remind you of that.