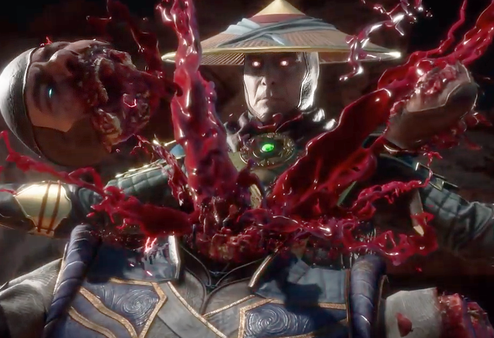 For anyone following the news, it’s been a pretty distressing couple of days. America experienced not one, but two mass shootings within a 24-hour time span, and these were of a scale large enough to make global news. Yes, America is still on track for more than one shooting per day for 2019, but the rest of the world is desensitised enough to the frequency of these that they only hit headlines once they’re of a certain scale. It’s incredibly distressing to think that even set against that bar of desensitisaion, two of these nightmare events would occur back-to-back.

The violence was of a significant enough scale for Donald Trump to get up and try and sound presidential. He failed, as the delinquent-in-chief always does, but what he did do was place a lot of the blame for the shootings at the feet of “violent video games,” going as far as to suggest that something needs to be done about these games. Predictably, the video game industry didn’t take that well, and since then the flood of “video games don’t make you violent” opinion pieces and Twitter threads have been thick-and-fast.

It is, of course, true that no one plays a video game and then decides to pick up a gun and open fire in a shopping mall. There’s no data to suggest that happens, and no proof that a single shooting, anywhere in the world, was a direct consequence of someone playing a violent video game. And yet this is also a selective and deeply disingenuous argument from an industry that gets dismissively (and aggressively) reactionary every time there’s some criticism from outside that is directed towards it. We’ve seen it in previous instances of video games being blamed for violence. We’ve seen it when people have criticised games for being addictive. The games industry is completely incapable of hearing and responding to criticism with any kind of self reflection or nuance, and this nonsense needs to stop.

At risk of being outrageously controversial here, I’m going to say that video games are too violent. It’s not something that should be controversial since, at other times when the “debate” isn’t attached to a mass-shooting, the games industry itself talks about how it’s too violent. Nonetheless, at this particular point of time, to question the depth of violence in games is to invite an entire industry to collectively throw a tantrum at you.

That’s not to say that games cause violence, however. I accept the many instances of properly qualified research that suggests as much, as I do any other well-founded and peer reviewed study. The issue with violence in games is not to do with that. Rather, the issue behind video game violence is much the same as the issue that anyone would have looking at what passes for blockbuster film, television, or anything else in modern popular culture. Violence is pervasive, it is extreme, and it is celebrated. And that is a symptom, rather than a cause, of cultural concern. Artists make this stuff because it sells. It sells because modern western culture has an unprecedented appetite for bloodthirstiness in its entertainment, in which kill counts are higher than ever before, action sequences are prolonged further and further over any kind of narrative development, and special effects teams make ever-larger piles of money from making all that stuff visceral. James Bond now kills more people in a single action scene than Jason Voorhees ever has, and we love James Bond. Call of Duty proudly announces white phosphorous weapons as a reward for killstreaks and the only response that came from fans with that news was how excited they were to play around with it.

The art that a society celebrates is a reflection on that society. You shouldn’t necessarily blame the artist for giving the people what they want, but by the same token, you should probably ask the artists why they’re not doing more to challenge it, because while they’re certainly not the cause of the issues that western society has with violence, they’re also overly eager to be a symptom rather than the cure.

In other areas of popular art we’ve become very, very good at questioning what artists produce. The depiction of women in games, for example. Many of those same people trotting out the argument that video games don’t cause people to become violence are the ones that get incensed about the likes of Senran Kagura and Dead or Alive, and write inflammatory headlines and Twitter posts about how these games are “for perverts” or – for extra editorial impact – “paedophiles”. If violent video games truly have absolutely no impact on the psyche of a person, than these people should be a-okay with a video game reaching into the very most perverse parts of Marquis de Sade’s work for inspiration, re-creating it in vivid, exacting, pornographic detail, but that simply doesn’t happen. I shudder to think what would happen to any developer that tried to produce a Sadian game, no matter how sanitised.

Another example would be the discussion around diversity. Particularly in Hollywood. White actors are no longer being cast to play ethnic roles. Ethnic actors are getting leads in projects, and those projects are making good money. Women are getting to play roles that would be traditionally be reserved for male actors, and we’re seeing more and more LGBTI roles being created that aren’t at the expense of the LGBTI community. The mainstream community saw the way films were made, understood that there were issues with it, and while no one thought that going to a film with blackface performances would turn someone into a racist, there was an understanding that this was not a positive reflection on modern culture.

But violence – every bit the cultural nasty that sexism, racism, and other forms of bigotry is – remains a blind spot. A blind spot that people have an intense reactionary response to every time it is raised as a discussion point. Over and over again they fall back on that “games don’t cause people to be violent” line, to the point where I’m no longer sure whether these arguments are coming from a genuine ignorance to the broader discussion and issues at play, or it’s a bad faith argument designed to silence any discussion about the role of violence in games.

I really worry it’s the latter. What’s most sad is that these arguments come from the same people that have so effectively fought for a more positive, healthy games industry in every other way. Donald Trump is an idiot, but violence in video games is a worthwhile discussion. It’s a pity that even the positive, progressive side of the industry misses these opportunities for self-reflection.

Woah, the Grandia HD Collection lands sooner than we thought