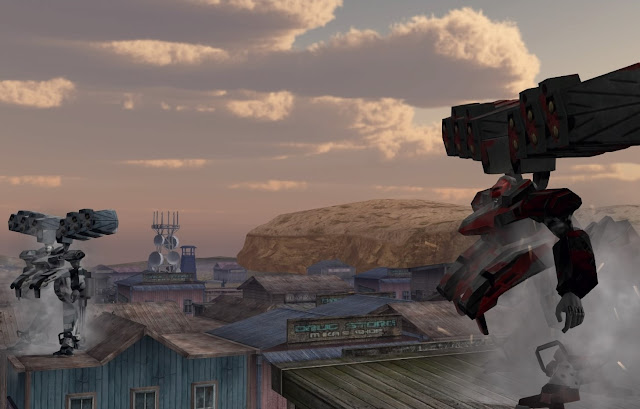 In an alternate timeline, the Vice President of the United States orchestrates a military coup d’état on the sitting President, imposing martial law and flooding the country with pro-coup propaganda. In an act of political brilliance, the President boards a giant mech and starts blowing things up. For a 2004 mech shooter originally exclusive to Microsoft’s Xbox and never released in the West, it’s a joyfully irreverent backdrop to a game with lots of explosions in it.

Its release in Japan was originally lukewarm, as an exclusive to a console people didn’t exactly want to own, and although it was fully voice-acted in English for a potential worldwide release, it was canned due to fears that a narrative about domestic political terrorism might not sit well in a post-9/11 world. But now it’s 2019 and politically motivated violence is even more prevalent – a lighthearted send-up of Bush-era nationalism might not seem as detached from reality in the Trump era – and so the madmen at Devolver Digital have decided to partner with Metal Wolf Chaos’s original developers, FromSoftware, to ensure that this once lost cult classic can again see the light of day.

From a gameplay perspective, Metal Wolf Chaos is a no-nonsense third-person-shooter power fantasy. Players control the President of the United States, Michael Wilson, as he pilots a specially designed mech which can be outfitted with up to eight different guns at once. Whereas FromSoftware’s other mecha series, Armored Core, is filled with complexity in both its movement and weapon options, Metal Wolf Chaos came from a different team who were intent on distancing themselves from FromSoftware’s established IP, resulting in a game which is far simpler to pick up and play. 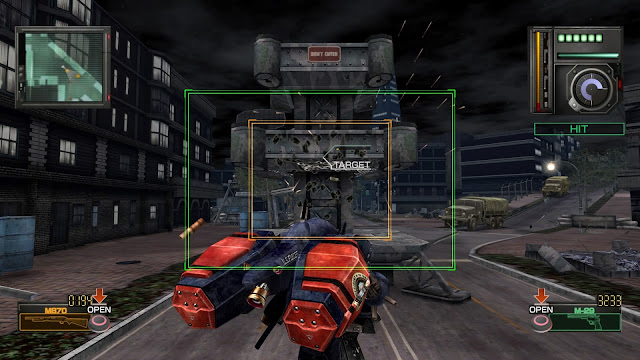 The game is divided into levels, each bearing a key objective which needs to be destroyed – sometimes a boss, other times certain defensive structures. The game will spawn in various enemies such as foot soldiers, tanks and helicopters to impede your progress, but it’s up to you if you want to engage them or not. Although it’s not taught to the player particularly well, Metal Wolf Chaos is very fair in its health system. It seems to have taken a page out of Halo: Combat Evolved – featuring a strong regenerating shield, with permanent chunks of health being taken off when the shield ran out. This gives the player the sensation of piloting a giant robot impervious to enemy fire: in the tutorial, the game literally has the player walk past rows of soldiers firing rifles which, thanks to your regenerating armour, have no chance of affecting your health bar. You’ll quickly learn that the only real things which can hurt you are homing missiles which need to be shot out of the air with machine-gun fire, land mines which are cleared in much the same way, and bottomless pits in the rare occasions which FromSoftware had decided to add some platforming elements. Most of the time you’ll just be rampaging through city streets though, blowing up buildings and enemies like with gleeful abandon.

The tone of Metal Wolf Chaos is wild, due to the odd situation that FromSoftware found itself in. It was inescapable that the game would be made with financial motivations at the forefront: the Xbox at the time was seen as an American company out of touch with the Japanese market, and Microsoft really needed something that would move its heavy hardware. The company chose to enlist an established Japanese company to create a game in a genre proven to resonate with Japanese players.

Hilariously, FromSoftware chose to lean into the fact that it was selling out – which led to Metal Wolf Chaos’s bizarre story about a fictional American president piloting a mech to fight against a coup d’état – and by trying to garner cross-cultural appeal, it ended up alienating both the Japanese and the Western markets, and left the game underappreciated in its original context. (That didn’t stop Microsoft from trying the exact same strategy two years later with Mistwalker, resulting in the rather excellent Blue Dragon and Lost Odyssey – which also underperformed, doomed to become cult classics with maddeningly rare game discs). 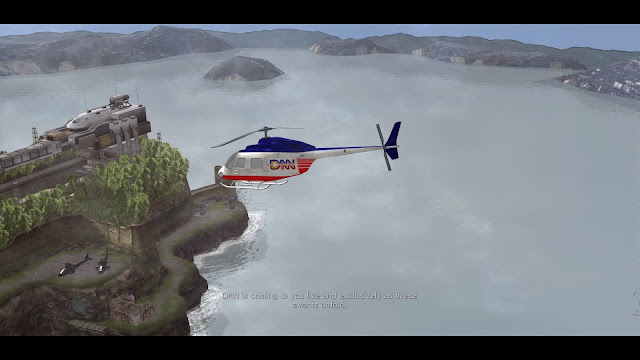 Metal Wolf Chaos’s story feels like outright parody, in a similar vein to other Japanese games focusing on American characters. The characters will drop “American” terms like freedom, liberation and justice without any real consideration on what they’re actually saying, and the conflict between Michael Wilson and his rebellious Vice President Richard Hawk (who has his own, stronger mech for some reason, even though the tech was supposed to be top secret for only the President) doesn’t amount to much more than a petty struggle. Although America in the game’s narrative is thrust in a state of martial law, the player doesn’t get to understand why, outside of each mission’s preamble that Michael Wilson is the good guy who is saving America and Richard Hawk is the bad guy who is destroying it. There are a few good jokes made at the expense of a news network cheekily named “DNN”, who appear in each of the game’s levels to report on the game’s events from the Vice President’s example – outright smearing the President and making enormous leaps of fake-logic to process the implication of the narrative’s events. The entire set-up, nonsense satire as it was meant to be, has become far more poignant as we move into an era of history where the real world sometimes comes across as the satire.

But what I love more about it, especially playing in 2019, is that its mechanics throw back to a blocky, imperfect time which was prevalent in Japanese arcade games at the time – think Time Crisis or Initial D. Metal Wolf Chaos features fully destructible environments, except it comes from a time where the Havok engine, now every developer’s go-to physics toolkit for making structures crumble, wasn’t widely adopted by Japanese developers. Thus, buildings and fortresses collapse with pixelated sprite flames, leaving jagged, two-dimensional polygons to represent rubble. The guns don’t feel weighty or punchy, and neither do the explosions. Of course, it’s impossible that a game from 2004 would impress contemporary audiences with bombastic spectacle; everything falls hugely short of what we expect from modern action games, but in a quaint, nostalgic way that adds to the game’s irreverent tone.

Metal Wolf Chaos is divided into levels like a Star Fox game – letting you choose which one you want to tackle next from a small variety, before you customise your loadout and get dropped in to an arena. This, coupled with the overall simplified gameplay for the mecha genre, lends to an arcade-y feel which rewards playing one or two levels in one session over longer marathons. The levels are based on American landmarks and are large enough to feel like proper city landscapes, taking the average player about 15-20 minutes to finish. An unforgiving lack of checkpoints, which forces the player to start again from the very beginning, even if they die just before beating the boss, encourages knowing the level layouts and finding the hidden civilians and other collectibles in each locale. The bosses are an underwhelming component of the game’s otherwise fantastic level design – few of them have interesting attack patterns which require player skill, and instead they tend to test whether the player has conserved enough ammunition or not in their earlier rampage through the level. 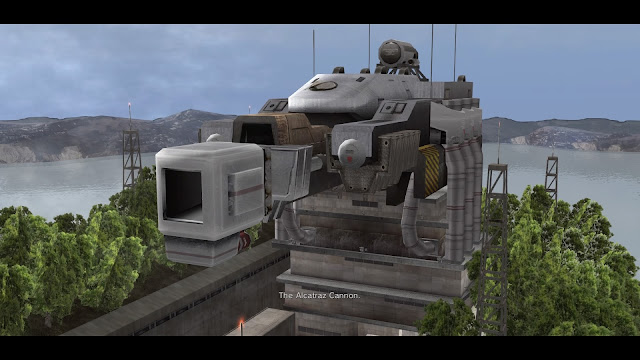 The overall adventure will take players 7-10 hours to complete, depending on how interested they are in revisiting levels to collect everything. There’s some replay value in trying out different loadouts (although the game advertises over 100 unique guns, they fall into quite distinct classes) or the levels in a different order, but personally I found that experiencing the story again was worthwhile too. Even though I had many complaints about the game’s design, I couldn’t help but be charmed by the campy dialogue, energetic cutscenes and the satirical representation of Western culture – although I think there needs to be a deliberate openmindedness on the player’s part to look past the more grating aspects.

This goes to say that Metal Wolf Chaos has always been a game which had to be sought out by those who could appreciate it for what it was. In 2004, adventurous Western audiences had to import not only a rare Xbox game disc from Japan, but also a functioning Japanese Xbox as well (remember how fun region locks were?) just to play a game which initially had been developed with a Western audience in mind. Devolver Digital’s re-release on modern consoles is a merciful one for the collectors and the curious, but the game’s archaic design sensibilities might put off anyone more used to modern mecha or shooter mechanics. Now that FromSoftware is a household name for challenging action RPGs, playing Metal Wolf Chaos endears the kind of prying curiosity that you might usually get from seeing a celebrity’s awkward high school photographs. It’s clumsy and filled with flaws, but it’s precisely these imperfections that make it so interesting.